I’ve been thinking of putting a tent on Arwen but I can’t afford to get one purpose built so I’m going to have to improvise. There are two main options – build my own or buy a cheap tent. Frankly I just don’t have the time or a suitable sewing machine so the former option is really a non starter. So it looks like the hunt is on for a cheap commercially produced tent but exactly what are my requirements? Well in no particular order but important to me are:


• speed of setting up - although I arrived in Salcombe last august reasonably refreshed – that won’t always be the case!

• Weatherproofing – it has to have a hydrostatic pressure of at least 1500mm minimum and certainly stand up to breezes equivalent to those I’d experience on land. I don’t want some flexi pole tent folding on me whilst cooking below! The ridge tarpaulin effect I had last summer sufficed because it was summer and dry and calm on the night I camped on board. Slinging a tarp over a rope slung between the main and mizzen masts was fine. I was able to tension the tarp by tying it off at corners and centre points to bits of Arwen. If a breeze had got up with some nasty rain squalls it would have been a very uncomfortable night!

• Weight isn’t such a critical factor as it would be on land; saying that, if it’s so heavy Arwen sinks a further 12” into the sea – that seems pointless (although the extra ballast might be useful when single handing).

• I don’t want something which will get too much condensation on it during night so I get an internal tent shower in the morning.

• I want a removable ground sheet too so that the tent will extend over the side decks. (If I did this – condensation would run down the tent insides over the side decks and out of the boat). This is a tall order. I think I’m looking for a fly sheet type arrangement under which I sleep in a sleeping bag inside my gortex bivvy bag.

• A light coloured fly sheet so that inside isn’t gloomy. If I anchor during the day in poor weather – I want as much natural light diffusing through as possible. A hanging fabric strap to hold my battery lantern would be good.

• An entrance each end with some extra porch space at one end in which can go a porta loo (for extended camping voyages). The double entrance will be useful if tied along a pontoon – so I can access dock lines easily; or put out bow and stern anchors. I’d also like to be able to perhaps concertina part of the tent over the cockpit so that I can sit out in the sun but have one part of the tent protecting me from the wind...especially if the mizzen is helping point me into the wind.

• Height – something high enough so that I can sit comfortably leaning back against the coaming sides but which won’t be so high as to cause extra windage problems or interfere with the boom above.

Things I will need to think through as well include

• Attaching the tent – where will I anchor the front and rear sections? Can I attach one end to the rear deck by the mizzen? How will the bow end be anchored?

• My boom position will have to be checked – how far up can I raise it on the topping lift/lazy jacks system I’ve installed? Will the tent apex clear underneath it? The aft end can be raised quite a way but what about the for’ard end? If it doesn’t go high enough it means I’ll need to consider a sloping roof tent – higher at aft end and sloped down to very low at bow end which will feel somewhat claustrophobic I think.

• How do I attach the side panels of the tent to Arwen? I could attach the tent over the front of the side coamings and attach them to hooks – but I’m worried I’d snag myself frequently as I clamber over the raised coaming. Perhaps hooks are better placed under the outer gunwale. This would keep side decks inside the tent side and they could form extra storage places on a temporary basis if the tent pulls tight over the side of the gunwales. Hooks is one obvious fitting method. However I could have an elastic waistline around the tent bottom and just pull that tight so it fits like a skirt around the outer hull or the outer side of the coaming – but how secure would that be? Alternatively, the hem could fit under the lower rubbing strake; another possibility is that I could tie a cord around the hull of Arwen and then elastic hook straps from the tent would fit over this rope at regular points. I read somewhere of someone even sticking Velcro to a hull and then the opposite Velcro strip on the tent hem sealed to it.

• How easy will it be to get up the tent? Putting in hoop tent poles – requires plenty of flat space on land – which isn’t available on Arwen.

• Fenders and how they hang from the sides is also another issue. There is potential for them rubbing under the tent material. I carry a huge 3’ fender which I occasionally hang over the side and I’m able to secure stern and bow lines with just this fender between boat and pontoon. I’d have to look very carefully where to tie off this fender so it wouldn’t interfere with the tent.

Um – this tent thinking lark makes my brain hurt. I’m going to have to look carefully at this. In the meantime here are some boat tents I have been looking at.............. 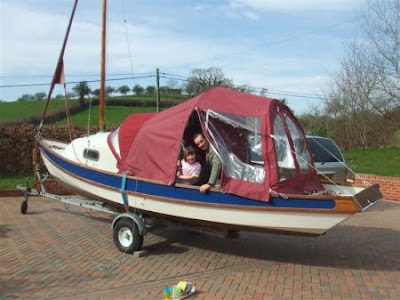 A tent on a drascombe coaster: copyright Bill Sargent 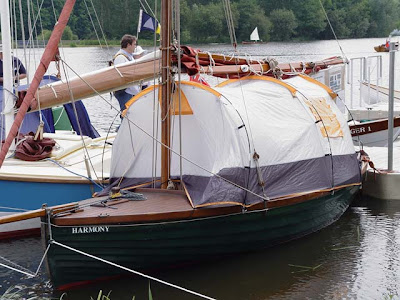 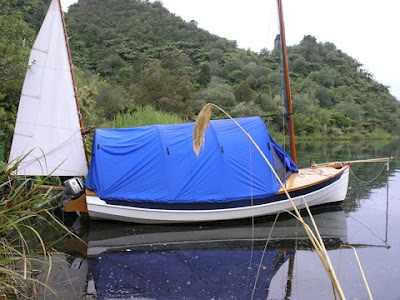 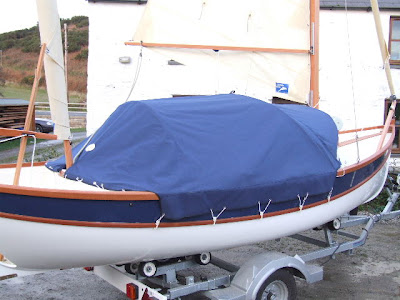 on a storm 17 I think Copyright Swallow Boats 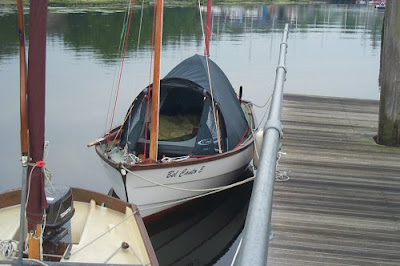 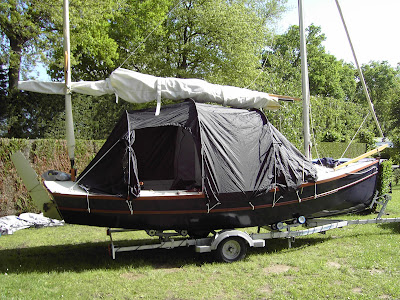 At least they are giving me plenty of ideas

I very much doubt that the photo of my old boat Hautai on your blog is copyrighted to anyone. Since the blog is about the tent cover maybe you would be interested to know that the cover was custom made for the previous owner (& builder). It was really well made and fitted like a glove but I never camped under it myself before moving on to a different boat. I have other photos of Hautai and the cover if you are still interested.

Hello Stobbo - I'd be very interested in seeing other photos of the tent cover - I'm just in the process of thinking about a new dinghy cruising tent cover now - the old tarp is giving up the ghost and leaks a little. I want something that will keep me dry and the wind off me.
Thanks for getting in touch - have you got a website with any of the photos on?