I may not, as I feared, have learned from my sailing exploits last August! Having sailed 25nm to Salcombe and been violently seasick in the process, I’m now thinking of sailing 25nm in the opposite direction to Fowey!
Fowey is found on the Southern Cornish coast about 25 nm west of Plymouth. It is a lovely coastal town with Polruan on the opposite bank. Other towns and villages are found along either bank – Golant, Bodinnick, Lerryn and Penpol. The river continues up to the historic town of Lostwithiel. 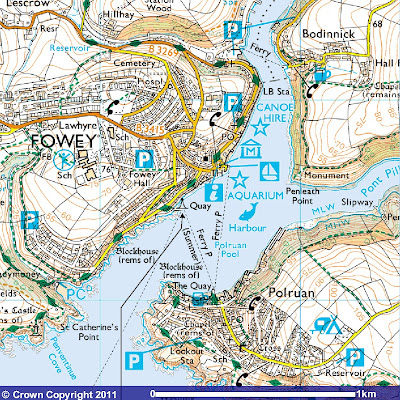 
I think the river is tidal as far as there and I guess Arwen could navigate it under the right tidal conditions – she only needs about 12 inches of water under her to float with centreboard up. The upper reaches of the river beyond Wiseman's Reach are tidal and, apart from the meandering stream, dry at low water. After that the River Fowey goes much further up into Cornwall and out onto Bodmin Moor. 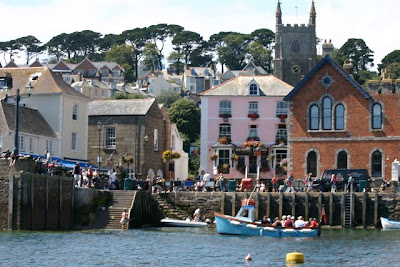 So in my head is a possible expedition – sail westwards to Looe or Polperro. Then continue the journey into Fowey, and if tidal conditions are right sail up the Fowey to Lostwithiel – overnight again. The return trip would be sailing back and stopping off in whichever port (Polperro or Looe) I didn’t stop off in on the way out! The idea is in its infancy – it’s just a small flicker of synaptic neurons in the inner most reaches of my brain.......and there are very few of those......so I need to give it some more thought...over a LONG period of time. Dad could come with me and if it is too much for him – my wife could collect him – Looe is 40 minutes way by car from us. She won’t drive the car with the trailer attached, which I can understand – but that could have been an alternative – just sail down there one way and not worry about a return trip. Take the boat out at Fowey and drive back home. 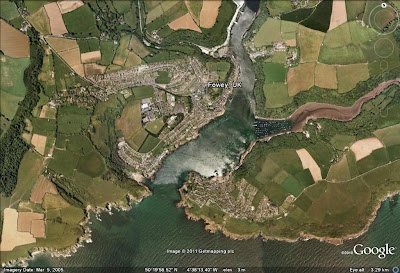 
Our winds are prevailing south westerlies so I guess it would be best done on a nice offshore northerly – that way it would be a beam reach all the way......but life is never that kind is it? I’m still mentally scarred from my return journey from Salcombe when I spent a whole day beating into the face of strong south westerlies back to Plymouth!
You have to be careful at Fowey. It is comparatively narrow (compared to Plymouth – Tamar and Plym) and there are some big china clay ships that use the upper port area. They have a deep draught and have to keep to the middle of the channel......from the charts I have glimpsed, there seem to be small craft channels either side of the main one. It can’t be easy piloting one of the large clay ships – visibility from the bridge in such confined waters would, I suspect, be limited for’ard. Stopping a china clay ship doing three knots would also be an issue. 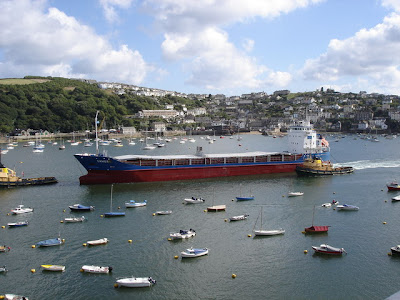 To be avoided: they won't stop for Arwen and me that's for sure! Copyright: Ian Cunliffe

I’ve done some preliminary research. The harbour patrol operates a listening watch on VHF channel 12. There is normally 0.6m above chart datum at all times and the spring tidal range is around 5.0m and the neap around 2.0m. Maximum speed within the harbour is 6 knots. 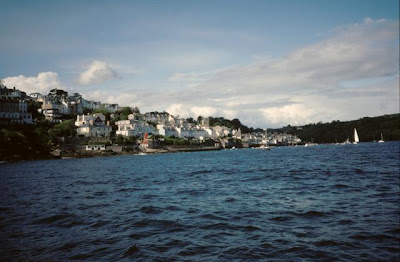 
Entrance to Fowey lies between St Catherine’s castle on the west and Punches Cross rock on the eastern side. I think a northerly course into the harbour is the done thing. The waypoint for entry is at Cannis Rock Buoy at 50 18’. 38N 04, 39’.95W. There is a day mark on Gribbin Head 1.25 miles south-west of the entrance. It consists of a red-and-white tower 25.6 m high constructed on a base 71 m above sea level. Cannis rocks dry out at 4.3m are 2.5 cables SE of Gribbin Head. Since I will be approaching from the east – I also need to keep an eye out for Udder Rock; 3 miles east of the entrance, 5 cables offshore – it dries out at 0.6m. It’s marked by a buoy. One nm ENE of this point is Larrick rock (which is 1.5 cables off Nealand Point). There are a number of visitors’ moorings and several floating visitors’ pontoons. Shelter is good and you can enter in most weathers although I suspect that strong onshore winds from SSW and an ebbing tide will give some interesting wind over tide chop! South west winds will also make the more seaward moorings uncomfortable I should think. Pont Pill looks a nice place to creek crawl; Ready Money Bay looks like a nice lunchtime anchorage as well. 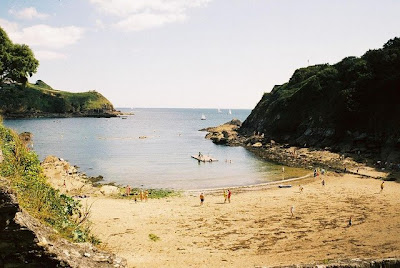 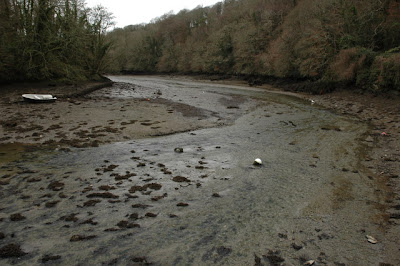 Pont Pill with the tide out: Copyright Phil Halling 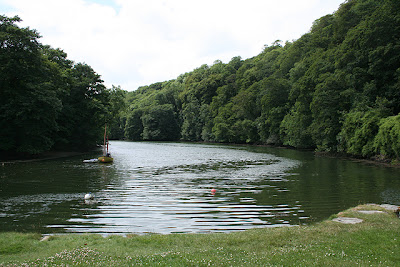 ......and with the tide in....looks kinda interesting creek crawling doesn't it?

More about Fowey can be found at http://en.wikipedia.org/wiki/Fowey whilst there is a nice little website about the old Fowey river boats at http://www.woodenboatbuilder.co.uk/?p=394


“Fowey is the harbour of harbours. It ought to be a kingdom of its own. In Fowey all is courtesy, and good reason for the chance sailing man. For your provision, or your transport, or your mooring, you pay no more than you should, and whatever you may need in gear is to be had at once. In Fowey there is security from all winds, good holding and, best of all, an air in which all other places may be forgotten”

I am assuming that the same still applies today and will do so in August when I attempt this long distance passage!  Of course Fowey is also famous for Daphne du Maurier who lived at Bodinnick across the river.

Here is a short film of a rather nice boat making its way up Fowey River!

On the way down from Plymouth, the voyage will pass a few places of interest. Firstly Rame Head – with some nasty overfalls to be avoided. It is a lovely peninsula with some fantastic Cliff side walks. There is a national Coast watch station on its highest point. You can read more about a fantastic organisation here at http://www.destination-cornwall.co.uk/NCI/nci-rame.htm . 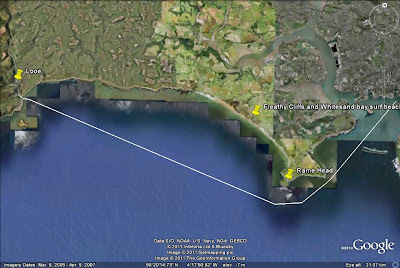 Queen Anne's Battery across to Looe via Rame Head 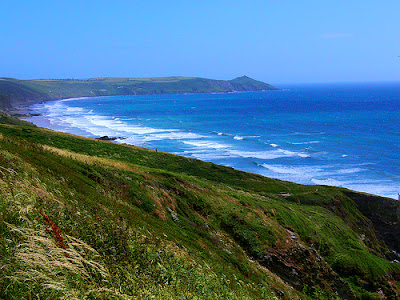 Looking back eastwards across Whitesand Bay to Rame head and beyond it Plymouth Sound :Copyright Scarglift's

Around Rame Head we come to the wreck of HMS Scylla, 1.4nm NW of the headland; deliberately sunk to form an offshore reef to protect the friable cliffs of Whitesand Bay, she has become a major diver attraction and a whole diving tourism industry has been resurrected at Plymouth which is really good for our local economy, as well as improving the reef biodiversity of the area.

We’ll need to keep out cross Whitesand Bay – it is a nasty lee shore area and not the place to be trying to land a dinghy – the bay is famous for its surfing beaches and biggish waves especially on southerlies.

There are some escape bolt holes – Polperro is one. The harbour dries out but the inlet is an excellent anchorage in offshore winds. You have to remember to avoid Polca Rock (1nm) east; and also the shoals 2.5 cables off Downed Point. Shelter in Polperro should be pretty good. You have to remember that you need to moor fore and aft in such narrow confines however! 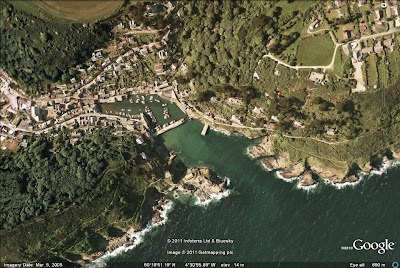 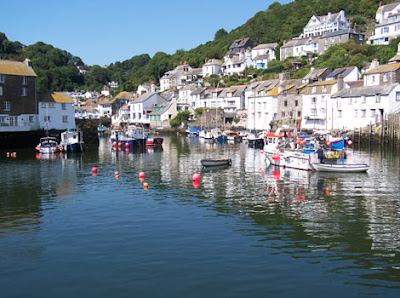 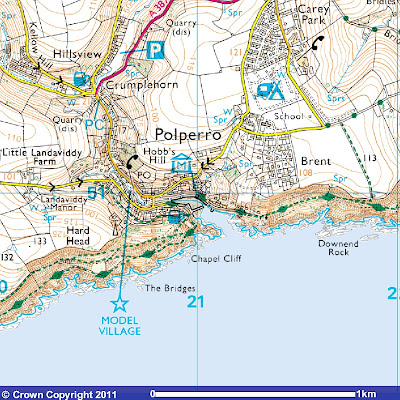 There is a nice video of Polperro here, for those who are interested.

The other place that I could call in on is of course Looe....but that will be the subject of another blog next week.

Fowey is delightful, not so epic but I could happily spend the weekend there exploring the river and the town, trail down and use the slipway by Bonnick ferry.

You can get up to both Lerryn and Lostwithiel on the tide, Lerry is much prettier but the baker in Lostwithiel is worth the trip

look forward to hearing about the trip

hey - good to hear from you again BB
baker sounds great to me; i haven't ruled out launching at bodinnick - doing Fowey and then sailing cross to falmouth; sailing there for a few days and then returning to Fowey and trailering home...options, options - .....so many options - delicious!