....a bits and pieces day really. I started by scrapping off the epoxy and varnish on the port gunwale to get at the rotting bits. ended up scrapping most of it but it takes time and over a three hour period I got half away along Arwen. The wood underneath is better than I was expecting. I'll finish scrapping it tomorrow and all being well will get some Burgess woodsealer on it. you can apply it on dry or wet wood; you put on several coats and it takes about 15 - 20 minutes to dry. It's had some good reviews. I can either leave it matt finish or top it over with Burgess clear gloss coat stuff to get the shine - I'll decide tomorrow. Brushes can be washed out in clean water which I like.  I'll mask tape off parts of the side deck so it doesn't stain Arwen's white decks although they are so dirty under the tarpaulin - nobody would notice at the moment.

I also discovered that the Admiralty tough charts have been discontinued...and I am gutted. they were perfect for an open dinghy and the ones I have for Plymouth and the rivers - have been well used. because they had a protected coating - you could leave them on the thwart; they'd get splashed - but you could wipe it off; you could mark them with chinagraph pencil which would rub off.............I'm gutted! I wanted the A3 booklet of charts for ports Plymouth to Falmouth....so I could start planning my summer trips....but not to be. I gather they were too expensive to print as Admiralty had to go to external printers and they didn't prove as popular as first anticipated.  Personally I'd have thought they were ideal for larger offshore ribs etc.

However, I did manage to come away with the next best thing although I will need to get them protected somehow.....the Admiralty Leisure chart folio...SC 5602 The West Country edition  Falmouth to Teignmouth. Now I didn't know about these but I sort of hit the jackpot because it includes the charts for all of my cruising coast including Fowey up to Lostwithiel; the Dart up to Totnes (there is another summer trip me feels); Polperro, another set of Plymouth and all rivers up to Calstock (useful to have a spare set).........at A2 size. this means I can start thinking about a trip down to Fowey in more detail. (although I still need to do loads of things before then.......see the 25th January 2011 post for details). 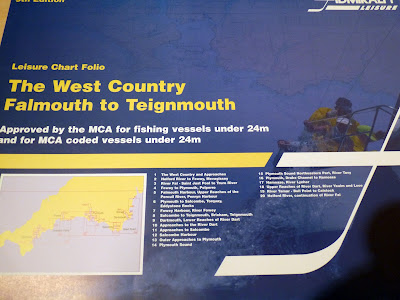 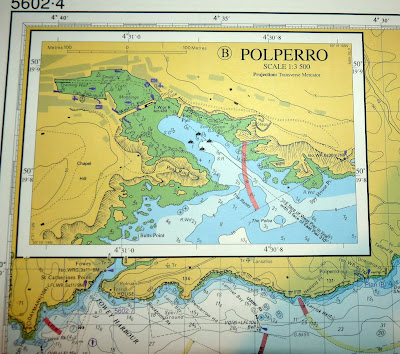 They show plenty enough detail for my needs...this is Polperro (my first overnight camp of the summer all being well)

Also spent some of the afternoon brushing up or remembering basic navigation stuff. Nothing major - some basic revision really:

I also quickly reminded my self about passage planning. I have a form I fill in each time which helps me remember things...but I also compiled a checklist. It sort of breaks down into some fundamental questions which I got somewhere from an RYA publication - but I can't remember which........
I need to consider
The one I did most thinking about this afternoon was the route. I need to get myself sorted using my GPS - its amazing how you forget something quickly if you don't use it frequently. I read some tips somewhere for when planning route - which I had scribbled on a piece of paper which I dug out.........
...the do's.......include
the don'ts............ 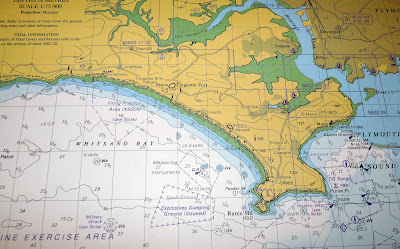 this is the Whitsand Bay stretch...I'll need to round Rame Head and go west.....
a fair way off shore as Polperro is almost a straight line across from the Rame Head tip

It's common sense really but last year I spent a whole day just getting the route plotted, the passage plan written and walked through in my mind several times.......it was worth it........I'm sort of cautious in this way!