Are coming together. My original plan was to explore Falmouth and sail back to Plymouth and possibly around to Torquay but I am having problems working out how to get a trailer and car back from Falmouth and around to Torquay as 'her indoors', rightly, doesn't feel confident enough to drive a trailer those distances.
Thus I will sail firstly to Fowey where I will probably stay at Penmarlem. A day exploring the Fowey and then it is on to Mevagissy, possibly via Charlestown. From Mevagissy, it is a long sail of around 20nm to Falmouth. Here I would like to try and find an anchorage somewhere up the river alongside St Mawes, so if anyone has any suggestions, they would be greatly appreciated.
A day sailing around the Fal. Perhaps a trip up to the smugglers inn?
Then after another night somewhere, again if anyone has nice overnight anchorages in the Fal area, please let me know, a crossing to the Helford river. A day spent sailing around the Helford and then the following day, a long sail back to Mevagissy. Overnight there and then the last day back to Plymouth.
It will be a round trip of some 150nm
I hope Arwen is up to it.....of course she is.
Posted by steve at 22:13 4 comments:

having posted about cockpit tents before, I discovered this site with an excellent discussion

So I turn into my normal little canal bit between moored boats - and as I get closer, to my dismay, I notice a large 30' + aluminium hulled yacht dried out on the ramp. AArgh!

There is room behind her at the pontoon but how do I actually get Arwen around this monster and onto her trailer as there is barely any slip left and low water on a spring tide is fast approaching?

One of the yard team dashes down and shouts for me to turn Arwen around and head back around to the north slip instead. Easier said than done. The turning pool is small and the water is receding fast but with some fast outboard on and turning both outboard and rudder sharply, I manage to turn Arwen in the small pool and head back up the 'canal'. Another embarrassing disaster averted. Whew!

As I come alongside the pontoon on the north slip, I hang back and moor Arwen up some 8 boat lengths back from the ramp. In behind me comes two small trailer fishing boats who moor up behind. We all understand the rules........I walk up to find the yard team to check that it is still ok to run my car and trailer down their working slipway.

Imagine my surprise when I find a large 6m dive rib - a bright yellow banana - has pushed in front of us all. Imagine even more surprise when a guy in a white van then reverses his monstrous speedboat straight down the ramp and launches it in front of us all and then demands we all move so he can tie it up alongside the pontoon. He then drives off to park the car and trailer, leaving his poor girlfriend to hold a 17' long speedboat on a piece of string measuring 6'!  6' and cleated to the far bow , I lie not! It barely reached across the bow deck! The poor lady was sat on the pontoon with arms outstretched desperately trying to hold the boat on a tiny piece of 5mm string. We all of course gallantly rescued her and it was nice to see her 'let vent' when her boyfriend returned.....not that he showed any repentance whatsoever!

Chaos reigns until the yard team take control and bring order to the scene. I patiently wait with my car on the other ramp, ready to go when invited to. I also made sure that I parked well over the ramp allowing the yard crew to get their trailer down between me and the pontoon to tow out the rest waiting behind me.

It is about patience, etiquette and basic good manners really - isn't it? QAB yard team are awesome and work really hard. Always cheerful and accommodating, the least we can all do is make their job a little easier.

Suffice to say, van man then drove off leaving all the security gates open....so that other lesser minions could shut them behind him!


A short clip of today. More to follow
Posted by steve at 22:00 No comments:

Spontaneity is getting up at six o'clock on a sunny Sunday morning and making the rapid decision that time and tide wait for no man so it's 'make all haste' to get the boat down to the ramp and launched!!!

What should have been happening was a) gardening and b) marking, lesson preparation and reading.
Sometimes though, that call of the sea, is just too powerful to ignore.

Guilt is beginning to take hold of me now as I type this post. I'm feeling slightly irresponsible! 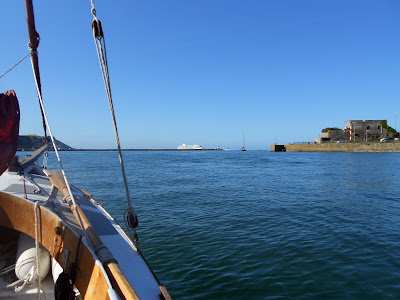 Hello! That's a rare sight! Something definitely out of place in the sound!

Yup! Definitely not what I was expecting.......Plymouth, 'the Miami 'of the west country! Well who would have thought it!

I saw her coming in. I am amazed at how they manage to turn her in such a small space!

All quiet in the car park - no fishermen or stray 'leads' zooming overhead. Phew!!
It was a wonderful morning sail. A falling tide from 5.0 m. Everything went like clockwork until hoisting the sail out in the sound when a series of small events took place which sort of sum up my worsening absent mindedness. First attempt? I'd forgotten to unclear the downhaul. Second attempt and I'd forgotten to remove the very last sail tie. Third attempt and one of the slab reefing lines came undone and disappeared. Fourth attempt, and I must say, most infuriatingly, I'd got the lazy jacks crossed over somehow. Now I did attempt to climb the mast to try and reach it given it was flat calm with no breeze. But that mast was a slippery sucker.......and two metres up I was suffering vertigo holding on for grim death with knees locked around that mast. Consequently I just unthreaded the lazy jack entirely, hanked it all up and made a mental note to try and avoid being an incompetent idiot in future. 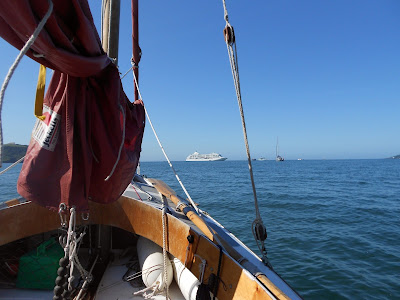 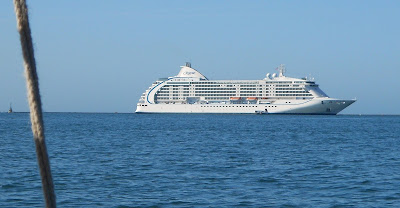 On the plus side, I gave 800 people eating their breakfast on the east side cabin balconies of a moored cruise liner, much to laugh about. That's just the way, never a cruiser liner around when it's going o so well, the tiniest mistake, and a whopping big one is there to witness your shame and humiliation.

A small navy ship is escorted out across the sound, taking the full way, across to Jennycliffe Bay and then diagonally back across the sound to exit at the western entrance. 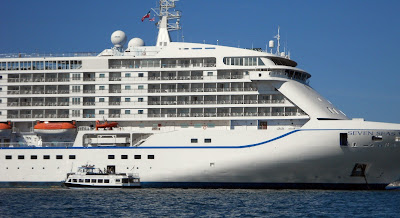 the early risers; it is 09.30 and some are getting onto one of our tourist boats to be dropped off at the Barbican landing stage

A few people were breakfasting out on their starboard balconies, soaking  up the early morning sunshine 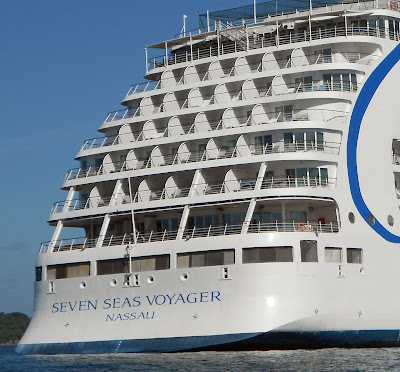 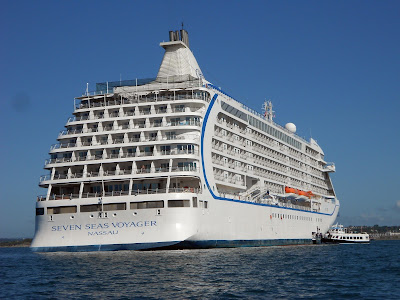 Do you think it may be people from the Bahamas coming here for a holiday?
Probably not!!
Tenders plied backwards and forwards from the cruiser liner to Millbay docks, disgorging tourists to our fair city and one or two of our tourist boats managed to go alongside as well. I had this terrible urge to go alongside and offer up bags of Devon fudge, pineapples and jars of clotted cream whilst dressed as a Devon pirate!
The RFA Black Rover was moored up near the breakwater and I have to say I felt much better about my own disasters but very sorry for the owner of the speedboat that had somehow 'parked' itself on top of the breakwater. No seriously, it was on top of it, well above the tide height.  Now that truly is a disaster to befall some poor soul. 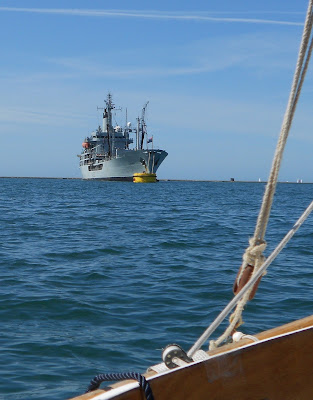 I criss crossed the sound, inside and outside the breakwater. Huge Box jellyfish the size of household black dustbins drifted alongside Arwen, their huge creamy brown domes about 2m below the surface. I've been told there are thousands to be seen and many have washed up on local beaches. They are huge!! 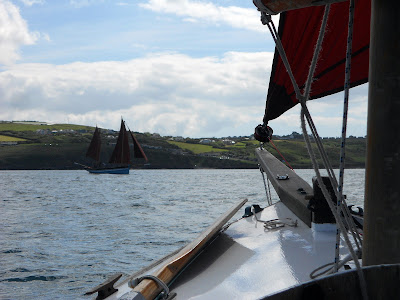 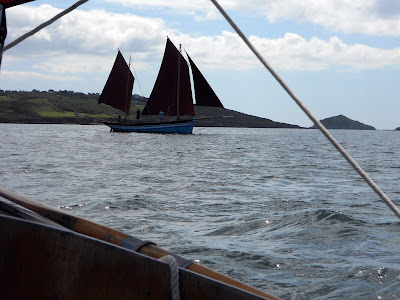 In the afternoon, the sea breezes picked up and the broad reach back across the sound to Jennycliffe Bay was exhilarating. Arwen was making 5.9 knots, racing over wavelets and beating several larger vessels at one point. It is the fastest I have been in her and clearly has something to do with the sail alterations I made. Her upper yard was more forward of the mast; the sprit boom cleared my head. My friend, who suggested the alterations will be well pleased.

So now it's time for marking and lesson preparation.......ugh! Back to earth with a bump!
Posted by steve at 17:42 No comments: