How do you keep busy during a lock down?

During the BIG lock down in spring, I cut and constructed 35 wooden garden steps with gravel infills, made a small garden pond and landscaped a nature log area and wild flower bee garden.

In this second lock down, I have been less ambitious. I am building two Kentucky Stick Chairs and a small matching coffee table.

This furniture set will grace the bark landscaped seating area of our bee and wild flower garden area, half way up the steep back garden. Its on the terrace adjacent to the small wildlife pond.

Lets be frank. It isn't an overly challenging woodworking project, but it is an IMMENSELY enjoyable one.

I first saw a pair of Kentucky Stick Chairs just after the first lock down was lifted. We had escaped for a coffee and newspaper read to Ullacombe Farm, just outside of Bovey Tracey. It is a delightful place with a farm shop selling local produce and a very nice café with outdoor seating area.  You can find out more about it at https://www.ullacombefarm.co.uk/ .

Most Kentucky Stick Chairs are wired together but I rather liked the "pulled together with strong sisal rope" approach.  Rather like this one below: 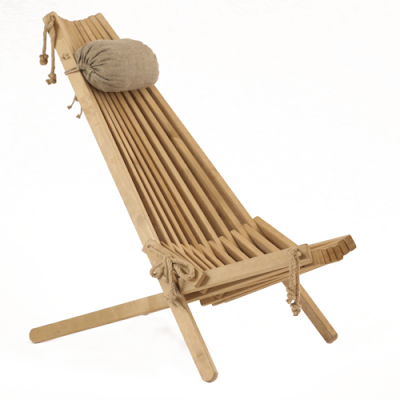 When you research 'Kentucky Stick Chairs' on the internet, a huge number of sites pop up. People are even selling plans on Etsy. However, there are plenty of free plan websites out there and the ones I went with were  https://www.southernrevivals.com/diy-stick-chair/  and  https://www.buildeazy.com/kentucky-stick-chair/

It will not come as any surprise that obtaining the right sized timber during a lock down is almost impossible. I don't have a planer/thicknesser and I wasn't able to (for various reasons) arrange the garage in such a way that I could rip material using my table saw.

The timber arrived in 3m or 2.4m lengths and the first thing I did was router over the four side corners along the length of each blank to round them off. 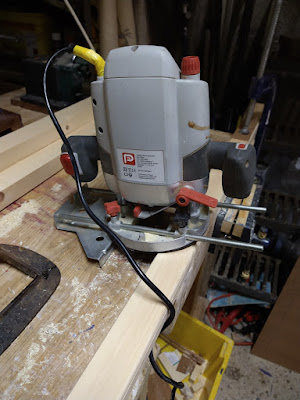 I then followed the above table and worked out how to cut all the pieces from the minimal number of lengths. After some scribbling on various bits of paper, a cutting plan was drawn up and each wood length was marked up. As I measured out each component, I lightly wrote on each piece what letter it was from the table above.  Using set square to draw square cut lines across both width and depth, a Japanese pull saw was then utilised to get the thinnest and most accurate cut possible. 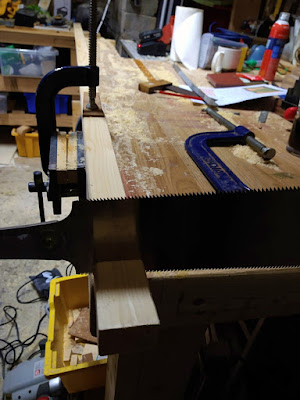 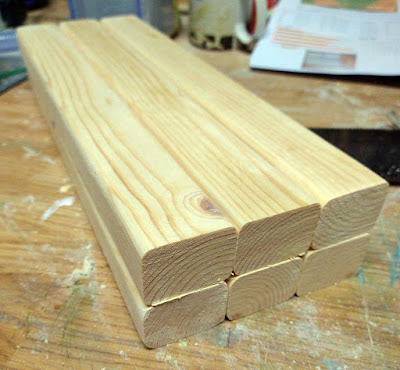 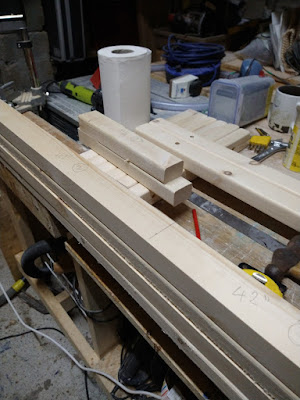 Accurately positioning the various drill holes on each piece of work is critical to the success of this project. Get them out of alignment and the sisal (or steel threaded rod if you opt for this) won't go through the various pieces accurately.  The measurements are on the diagram below

I started off by using a drill press and jig but actually found it kept taking time to set it up, so defeating the object! After drilling the fourth hole, I opted for doing them by hand, clamping each piece of wood in my bench vice, supported by a wooden block below. This block was important, not only supporting the wooden blank but also preventing splintering as the drill cut through. 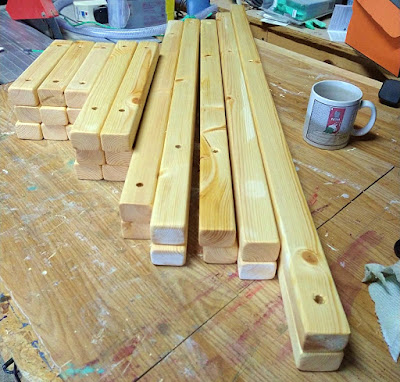 Task Four:
Sanding - lots of sanding. My little sander blew a fit literally. A big bang and blue flash, a tingle up my arm and the circuit breakers kicked in across the garage plugs. The little Bosch sander, ten years old and used on much of Arwen at one time or another, was no more!
Its a good job I live less than a mile away from a Screwfix! 80 grit followed by 120 grit and then finally a quick rub down with 240 grit, I re-sanded the rounded over edges and then the ends of each piece to take off the sharp corner edges.  I may have been over enthusiastic about the sanding!
Task Five:
Each piece was carefully rubbed down with white spirit to clear away any remaining sanding dust and left to dry for 24 hrs.
At this point, I decided a dry run fit was required. No I don't know why either but I sort of justified it with the thinking that if I had mis-drilled one of the holes and things didn't go together, better to know now than later after everything has been stained. 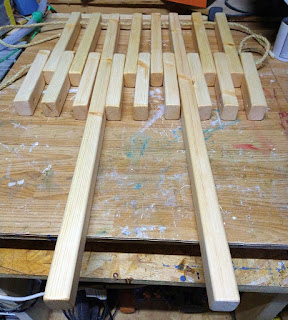 I'll go into more detail about how to do this in the next post but suffice to say I was pleasantly surprised. I think it is the first time that anything has actually turned out straight lined and without any inaccuracies built in due to my poor mathematical ability. Wonders will never cease. 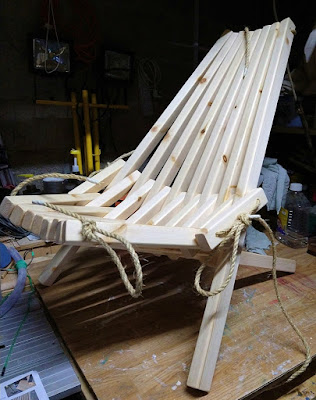 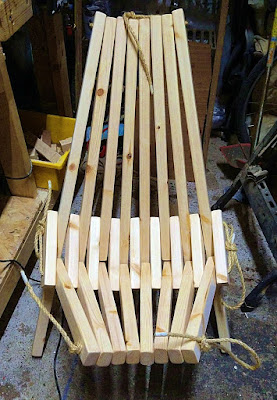 Not sure who did the imperial to metric conversions but they are almost all wrong.
Maybe best to build these in imperial?