More to follow. With this much rain and the ground already saturated and water tables high; this is not looking good for the forthcoming week ahead! 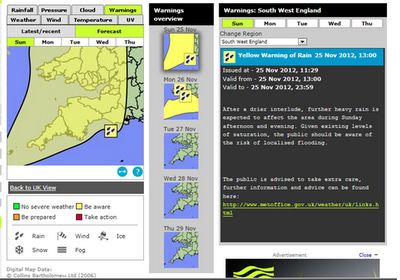 Flooding in the UK

This was a shot on Plymouth Hoe a couple of days ago when winds reached Force 9
We are in the grip of some of the worst flooding I can recall here in the UK and its only November.  I read that today 800 homes have been flooded after storms hit parts of England and Wales. My own home countries of Devon and Cornwall have been very badly hit and a young lady of 21 was tragically killed in Exeter by a falling tree. 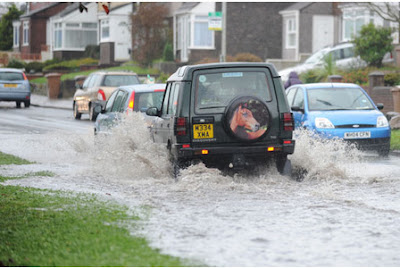 Flooding in Southway, a suburb here in Plymouth
We have 220 flood warnings in place across just England; 57 in the south west where I live. More flooding is expected and on its way! We had an astonishing 60mm of rainfall just last night. I woke at 3am to see the wind howling down my street, something I rarely see as I live on the slope of a north facing hill which shelters us from the south west gales. 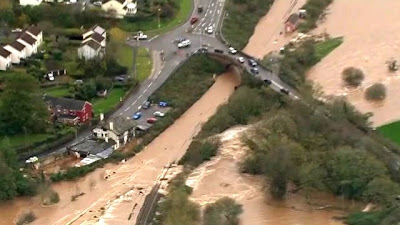 Flooding just outside Exeter
In my city Plymouth, 60 people had to be evacuated due to safety concerns in at least twelve different places around the city and many cars were abandoned. We are still cut off by rail from the rest of the country as the only two railway routes out of the south west are blocked or washed away just outside the north of Exeter. 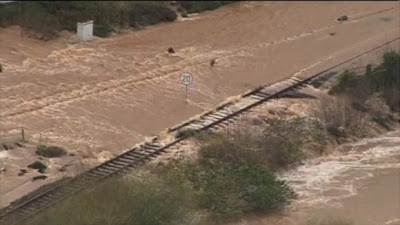 The main line from Penzance to Paddington, London. Or it was.  The double line behind in the field - are collapsed power cables!
It will take a week to get these railway lines back up to safe usage. The Met Office has issued an Amber weather warning for 50 to 70 mm of rain by the end of Monday.
The problem is run off from already wet fields that could lead to further river and surface water flooding; and then there are the strong winds that could worsen surface water flooding, as wind-blown leaves and debris block drains. 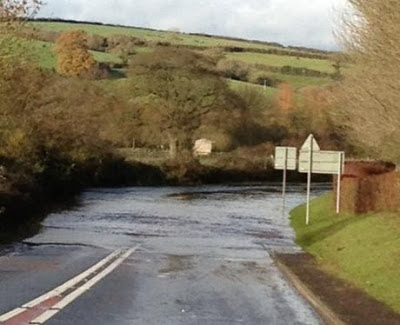 One of our local villages somewhat cut off at present

As I sit here typing this the rain is pounding off the roof outside. The back decking is already an inch under water but we are safe. I worry at times that our garden, on a steep slope and heavily wooded may suffer a landslide but it is very doubtful. There are branches down in the wood in the upper garden; the trees at the front have lost all their bright coloured autumn foliage. We’ll have some clearing up to do outside I suspect. But that is nothing compared to people around Devon who are clearing flood damaged possessions and gungy floodwater silt out of their front doors. 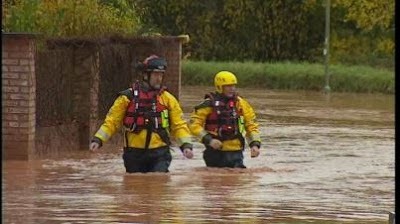 Flooding is a nasty affair. It means you are out of your house for up to a year; the walls have to be replastered; all the wiring redone; floorboard replaced. And how do you replace all the photo albums full of memories of your life from childhood. I know the consequences of flooding are worse if you live in a poor country like Bangladesh, but even here in the UK, it has devastating effects. 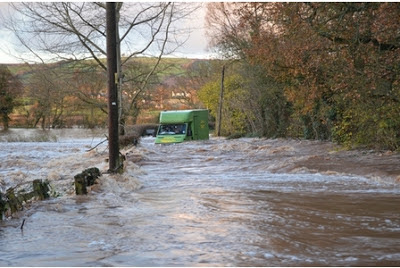 
Steve
All images are copyright of 'Evening Herald'; 'This is Exeter'; The Times; The Daily Mail; ITV .com; BBC news website
Posted by steve at 19:08 No comments:

I think sailing is over for this year

I think sailing is done for this year. Today would have been perfect - winds 4 - 8 knots; one of those crisp cool but very sunny November days. Alas, I have a chest infection. It has been with me for a few weeks now and shows no sign of clearing. The product of having worked 9 70 hr weeks on the trot, there seems to be no let up. I tried to go for a walk with 'her indoors' this morning around the Barbican , up onto the Hope and then down around Millbay docks before returning to the Barbican. I barely made it up onto the hoe sounding like an asthmatic, rattling steam train in need of some TLC. The last time I remember wheezing this badly and having this amount of shortness of breath was when I was eight and Dad had to carry me back from the doctors because my little legs gave way from underneath me as we climbed the hill to go up through the castle wall gates on the way home in Conwy. Then I had been diagnosed with Bronchitis; it's feeling somewhat similar again 42 years later!
Still walking slowly gave me the chance to get a few autumn snaps of the Barbican. I'll have to  hope for a few crisp winter sunny days at Christmas. Poor Arwen, she does feel neglected! 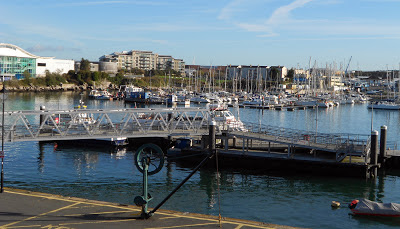 Looking across from Citadel Road towards the National Marine Aquarium on the far left and the luxurious Queen Anne Flays in the left of centre. The marina is QAB where Arwen gets launched. The footbridge and pontoon in the foreground were put in place a couple of years ago for the tourist 'dockyard tour' boats and supposedly for all the cruise ships that stop off in Plymouth to disgorge their occupants. I'm still waiting to see that bit happen! 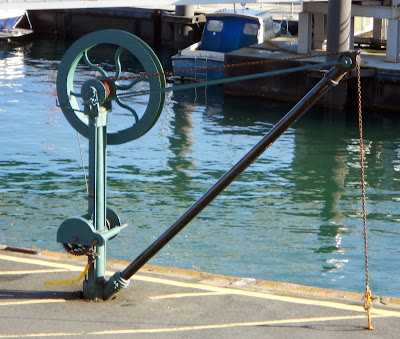 One of the original cranes preserved in good condition. From a bygone era when I think railway sidings ran along this part of the quay 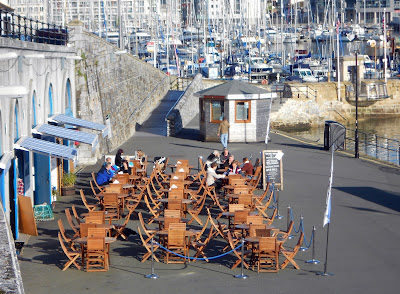 Now the quay serves as a cafe area, nicely done, with cafe installed in the arches under the Citadel Road. A lovely spot always catching the sun and sheltered from the SW winds 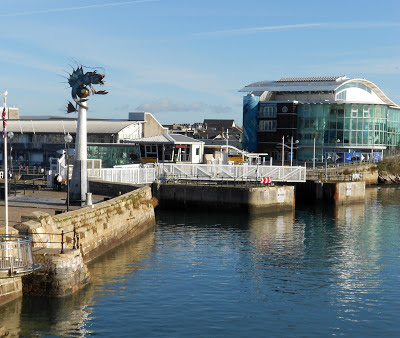 In the foreground on the left are the 'Mayflower Steps' famous for our intrepid settlers of America! The giant prawn has been there as street sculpture for many years now. The white bridge spans the lock gates which give access to the inner Sutton Harbour marina area. The bridge pivots on its access. The glass building is the Marine Aquarium 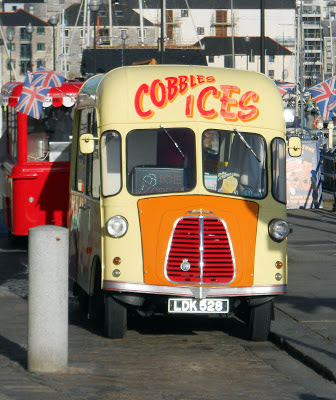 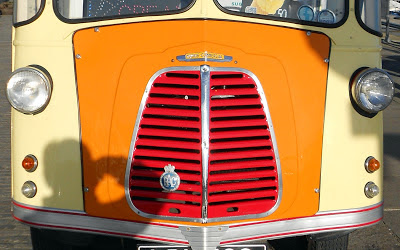 'Mr Cobbles' has become a feature of this part of the Barbican. Same pitch, all weathers. The van, a Morris Commercial dates from the 1950's I think. He has done it rather well. 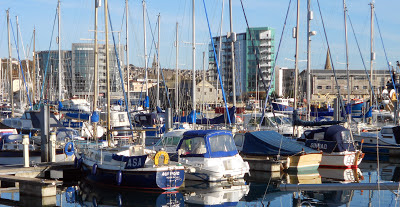 Year in, year out; same boats in the same place. I never see an empty berth where they should be.....do they ever put to sea I wonder?

posted some film of two navigators sailing along with two other boats. Enjoy at http://www.gaffrigsailinginwa.org/blog/

and there's another thing bugging us too. How do  you fit these vespa mirrors to the handlebars so that they are positioned in a way that can actually show what is behind you? 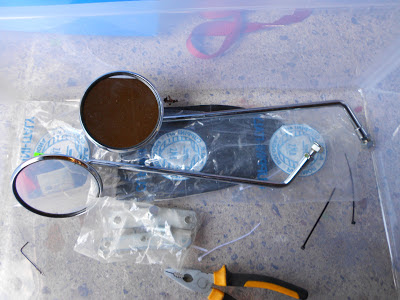 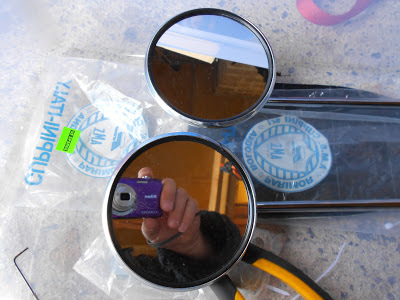 The mirrors themselves do not pivot on their support rods.....so getting them adjusted is a real fiddle or maybe we are just being really dim!

saving your blog: how do you do it?

I've made some 400 or so blog posts since setting up this blog; there have been 478 comments. I've saved the photos, videos and most blog posts as word documents but is there a way of actually saving your blog pages?

I have created some on-line books which I have saved although I have yet to purchase one. Surely there must be a way of saving your weblog pages?

If anyone knows please do advise me.

end of half term

and it is time for Arwen to be packed away for the winter. We have barely sailed together this year so poor has the weather been. When I have been able to go tides and weather have conspired against me; when it has been perfect weather and tides, well work has been too frenetic. Ce sera sera and all that.  Arwen has languished all forlorn on the driveway. I had hoped that maybe there would be one day this half term break for a sail but it was not to be. Tuesday was sunny but completely windless, one of those Atlantic highs coming down from the polar region with little to no wind whatsoever. The rest of this week has been windy but intense showers.

In the meantime we have bashed on with Stacey, the motovespa 125 super that we are restoring.  She seems to sound OK but then we keep hearing a tinny rattle somewhere and we can't work out where from.

We also still have problems adjusting the gear and clutch cables so that the gear section of the handlebars turns freely and selects the right gears. Our search for a good vespa mechanic in our locality remains fruitless and our vespa forums have been unable to help.