“Hail and sleet in the fierce squalls cut my flesh till the blood trickled over my face; but what of that? It was daylight, and the sloop was in the midst of the Milky Way of the sea, which is northwest of Cape Horn, and it was the white breakers of a huge sea over sunken rocks which had threatened to engulf her through the night.” — Joshua Slocum


How can you not be enthralled by a book written by a man who can write phrases like that above?

My brother, who lives in New Zealand, gave me ‘Sailing around the world’ by Captain Joshua Slocum as a Christmas present (thanks Bro – inspirational choice)…and so far I haven’t been able to put it down. I even stopped skiing for an hour each morning for a hot chocolate break whilst on a New Year holiday in the Italian Alps so that I could carry on reading …..and nothing stops skiing!!! 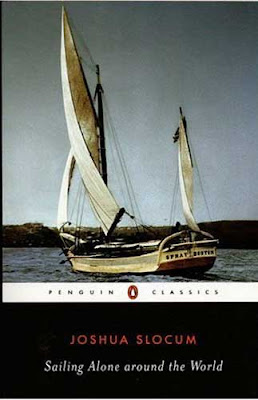 “Yes, Slocum’s journey was ‘epic’ but it was also eccentric, unlikely and his unsurpassable action elegiac. Modern sailors accomplish almost routinely what Slocum undertook, inspired with a lonely courage, a sense of humour and a sense of wonder, which gives new meaning to the term ‘freelance’. The unaffected and quirky intimacy with which he writes will never be matched. You cannot do what he did any more.”

I’m not sure whether I entirely agree with Matthew’s comments above – I’m a big fan of Jessica Watson and for a 16 year old to do what she did – rates pretty highly in my book.

I like better Arthur Ransome’s comment……"boys who do not like this book ought to be drowned at once…..”

I’ll make comments about what I read as I progress but for now here is an introduction to anyone who doesn’t know much about Captain Joshua Slocum.


Captain Slocum was the first man to sail around the world solo. A Massachusetts skipper, at 51 yrs old, on April 24th 1895, he left Boston in Spray a 37 foot sloop of 9 tonnes. Three years later in June 1898, he dropped anchor in Newport, Rhode Island. He’d cruised 46,000 miles entirely by sail and entirely alone. 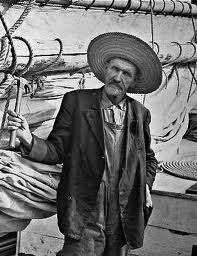 ‘Sailing around the world’ was first published serially in The Century illustrated monthly magazine from September 1899 to march 1900. The book was published in March 1900. It was a generous sized volume bound in blue cloth and embellished with drawings by Tom Fogarty and George Varian. The first print run was 5000 copies and a second printing followed of 2500. Since then there have been 16 other printings. Not bad for an author barely known in the literary world. Yet 'Sailing Alone Around the World' could be judged one of the immortal books. He was the FIRST to sail around the world solo. Whilst many have gone on to achieve that feat…….Joshua Slocum was the first…….and with none of the technology others have been able to use subsequently.

Born in Nova Scotia, in 1844, he was one of 11 children. His mother was daughter of a lighthouse keeper; his father, amongst many things, was a maker of fishermen’s boots. His father did not prosper and Joshua ran away frequently to sea. At 14 he was a ship’s cook; and when his mother died, Joshua left home for good as an ordinary seaman. With no formal education after 10 yrs old, his entire life was spent at sea. He taught himself through the library he carried with him as a ship’s master, and later on the Spray. In fact on the Spray, in calm weather he would lash the helm and spend his time thus

“I sat and read my books, mended my clothes, or cooked my meals and ate them in peace. I had already found that it was not good to be alone, and so I made companionship with what there was around me, sometimes with the universe and sometimes with my own insignificant self; but my books were always my friends, let fail all else.” 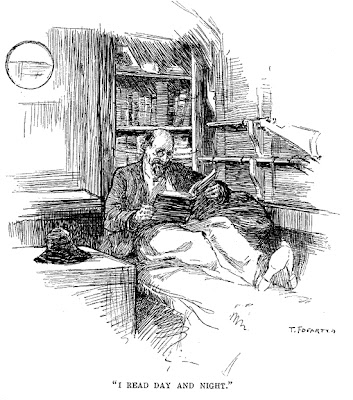 Joshua sailed 13 years out of San Francisco to the far east; where he married Virginia in 1871…a lady who was to accompany him on all voyages until she died in 1884 (she must have been an extraordinary woman herself….she sadly died aged 35….and his sons report that Joshua was never the same after her death). In 1882, Joshua bought shares in a ship, the Northern Light which he also commanded.

“I had a right to be proud of her for at that time, in the 1880’s, she was the finest American sailing vessel afloat.”

Two years later having sold his interest in the Northern Light, Slocum bought the 'Aquidneck' and with his children and his new wife, Henrietta, he set out to trade freight along the South American coastline. Unfortunately, in December 1887, the bark became stranded on a sandbar and was wrecked. Slocum paid off the crew, salvaged what he could and went to work on a 35 foot canoe, half Cape Ann dory, half sampan and junk rigged – she was, of course, the ‘Liberdade'. What’s more remarkable, is that Captain Slocum with his young wife and family, then sailed this boat to Washington DC – a journey of five thousand miles! a 3D generated image of what 'spray' looked like:  Copyright Turbosquid


With steam ships beginning to dominate the sea trade routes, this was to be Slocum’s last command. And so, he turned to being an author with his first book…’the voyage of the Liberdade’. It was printed at his own expense in Boston in 1900 and got little noticed and made little money for him. With a family to feed and clothe, Slocum went to work fitting out whalers. Where upon in 1892, he ran into an old whaling captain acquaintance who encouraged him to come to Fairhaven when he’d be given a ship once more to command. The rest is history as they say, for Slocum found in a field an old oyster boat ‘spray’ propped up on the banks of the Acushnet river. Over thirteen months he rebuilt her plank by plank…and finally embarked upon his greatest voyage – a circumnavigation of the world. There was no engine; no self steering or radio. He lacked GPS, sponsors and he departed with only $2 in cash……and a $1.50 tin clock for a chronometer!

While most sailors now go west to east, taking advantage of the prevailing winds, Joshua Slocum sailed east to west — the hard way round Cape Horn. He was master seaman – a person to could read the weather, deploy sea anchors, know when to lie or run before heavy weather and balance his boat so that she would sail for days with little attention to the helm.

I guess there is much I can aspire to when sailing in Arwen…….!

There are some short stories by Slocum available on the web. This site will take you to a summary of the different ships sailed by Slocum throughout his career. Go to http://thearmchairsailor.blogspot.com/p/voyage-of-destroyer.html


There is a lovely file you can down load about Slocum’s voyage– it’s been put into Google earth. There is a video that explains the idea behind the project - go to this link at http://www.youtube.com/watch?v=yVw8axe10QI
The file talked about can be downloaded from


Enjoy and Happy New Year to you all