any video from Roger is a masterclass in Dinghy Cruising and also in video creation and editing. This one is no exception. Put aside the ten minutes needed and watch..........really interesting.....and I for one am really grateful to him for posting such an honest, frank and useful assessment of his situation

Although not a Welsford navigator....

It is a wayfarer I think. More importantly it is sailed in my neck of the woods and this video encapsulates what fun DinghyCruising can be. Nicely edited. Great little movie.
Enjoy.

I was hoping to get three days sailing in Falmouth this week, unfinished business from last year! I wanted to sail across to Helford and up that river and the Percueil but fate intervened. For various reasons that I won't bore people with, we are having a new replacement car. Nothing to do with the  existing one we have which we are very happy with, but we need something with more grunt power and so we are switching it for a 4 x 4 diesel. And so this week we give up the old car and get the new one and the tow bar has to be fitted and so that scuppers most of this week where I have time. Hey ho that is the way it goes.

Yesterday was a lovely sail day, steady breezes, plenty of sunshine, warmth on the face. Arwen and I pootled around the sound, off Cawsand Bay, over to the OCR buoys and then back down the eastern side of the sound. All in all, several hours of just tacking about passed by. It was fun despite muppet man in the big cruising yacht who had no understanding of rules of the road or any basic courtesy out on the water! We covered 15 miles back and forth at an average speed of around 4 knots. Fastest speed was just over 5 knots.
Posted by steve at 14:17 5 comments:

speechless and that's a first!

It is rare I am speechless but it happened today. My speechlessness lasted only for thirty seconds and please don't think that I am a naturally gobby geezer....I'm not truly......but something happened off the western end of the breakwater this afternoon which genuinely left me stunned.

Picture the scene - an outgoing tide, a westerly breeze around 9 knots and rather lumpy waves as the sound empties. Arwen is running downwind surfing wave fronts. Space all around her but with a large 40 footer closing from astern on a very slight diagonal passage off my port stern quarter. She was huge with a massive grey/black spinnaker but she was a good 400m astern.

And then this voice suddenly says 'move over I have right of way I'm on starboard tack'.
She dwarfs me and she is five feet off my port stern quarter. She slides alongside stealing my wind completely. Five feet - I could have touched her hull sides. He tells me to move which of course I can't because he has stolen the wind!

Unbelievable! Surely the boat astern must keep clear as the overtaking boat. And he was to windward as well so surely he should have kept clear on that one and given he was going downwind directly he really couldn't have been on a starboard tack. Plenty of room and he deliberately chose to close on me and then tell me off.

Speechless. Absolutely speechless. I did point all this out to him but he appeared very sniffy! 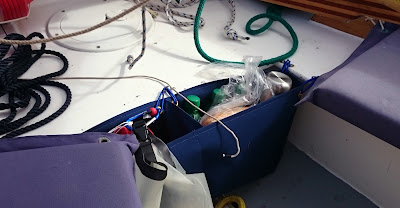 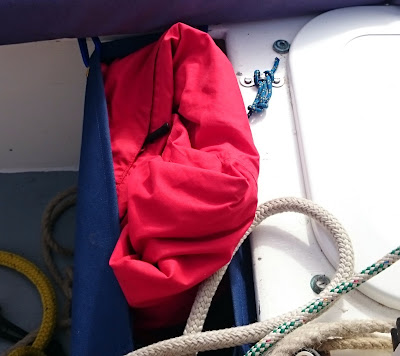 Arwen's new halyard bags made by her indoors...now in action. The cockpit is so much tidier! 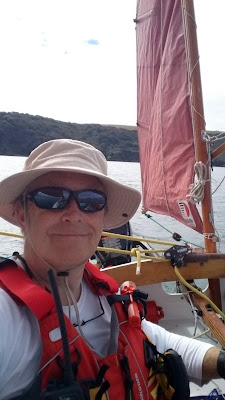 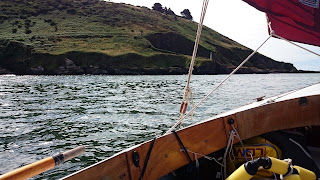 Running along Jennycliffe Bay on the eastern side of the sound 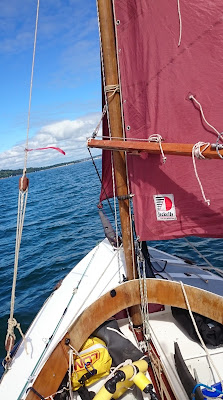 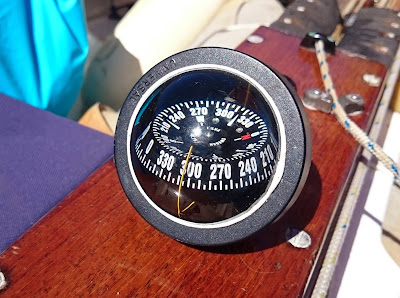 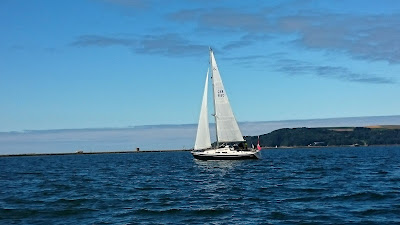 Lots of boats out today. Plymouth Long-room warned all big ships inbound that the sound was busy 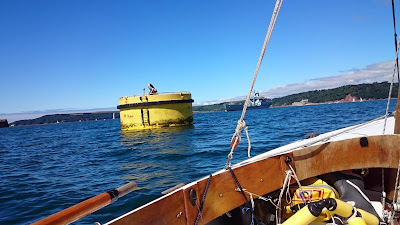 Passing the big naval mooring boys. In the distance is RFA Wave Ruler 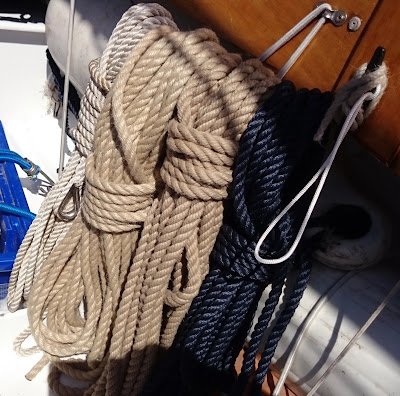 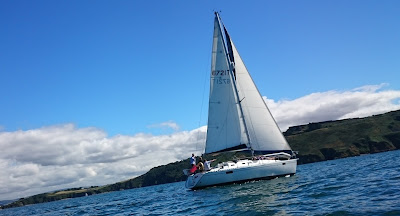 there is a good article on building a navigator her in the UK in the August edition of Practical Boat Owner magazine.  Mike Price has a come a long way in building his navigator and he has gone for very nice teak strip seating. I look forward to seeing it launched. Arwen's Meanderings gets a wee mention in a box of useful websites at the end of the article along with Joel's, Barrett's, Robert's and John's websites. Duckworks over in the US also gets a mention.

Tomorrow is the first chance I have to get out on the water. The weather is about to break and so I may delay it until Saturday. A minke whale was spotted off Plymouth Sound during the hot weather earlier this week......when I was assembling dad's shed for him......so I am hoping it is still there!!!
Posted by steve at 09:45 No comments:

I have just spent a lovely week with two colleagues and twelve students who were doing their level 2 power boat RYA certificates. Three days doing the course, one day doing a passage around the sound and up the Tamar and a day of fun kayaking and games.

The course was run by PDSSA, the Plymouth and Devon Schools Sailing Association and it was outstanding. Such a high level of instruction. Instructors were fun, knowledgeable, caring, enthusiastic and so patient. I cannot recommend them too highly. Some of the best instructors I have had the privilege of working with.

There is no doubt in my mind that we will be doing it again next year. Well done to Ade and his team, Darren, Barry, Nick and Ben. Thanks guys for an exceptional week.
Posted by steve at 20:18 No comments:

Another video from Spanish Navigator
Posted by steve at 06:55 No comments:

Check it out at
https://youtu.be/DT-y4f46sDs