What can make a grown man lose his rag, rant, have a tantrum and generally curse words he didn't even know he knew?
Spending 6 hours on a phone trying to get an insurance quote for his son to ride his beloved scooter 'Stacey'.
I cannot even begin to describe the frustration of trying to get quotes!
The cheapest I can get is £704 and this is a non fault policy! Now try and get them to define what non fault is.......just don't go here. Apparently it means he doesn't get any legal protection if he is at fault in an accident. At least that is what I think it means because after 20 minutes trying to get the person to explain it to me in words of one syllable, I began to lose the will to live as she read out the same stuff six times in a row and wouldn't deviate from the script! 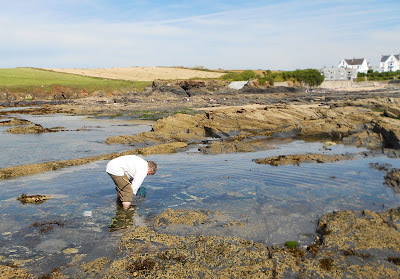 ......some old photographs from the summer; another summertime family pilgrimage to Padstow. My daughter and I love going to Trevone. One of my greatest pleasures in life is rock pooling with my 'little' girl; although she's not quite so little. She has had a fascination with rock pools since she could totter across the sand.
Anyway, crabs, prawns, limpets, starfish, periwinkles and baby lobsters........no wonder she's about to become a wildlife and conservation graduate in July.

One of the things I'd like to do this year is sketching. My mum has a talent at sketching and I'm hoping I may have inherited some of it. So I was delighted to read Gavin's 'intheboatshed' blog about a maritime artist Claudia Myatt. Now I know that she did a talk at one of the boat shows recently but actually her top tips page is wonderful as is her at work.

So visit her site at http://www.claudiamyatt.co.uk/2013/01/ketches-and-sketches/
I think you will like what you see.

Below is just a taster of some of her work with all copyright
obviously attributed to her.

I caught sight of an article in my local paper about the plans for the university diving centre. I must confess that I never realised that the building just left forward of Arwen below is the very fore mentioned building. Dur!

The plans look really good and truth be told the building is looking slightly tatty in places. Plymouth university has always impressed me. They have a dynamic, go ahead outlook and an excellent academic track record. This new plan is a very welcome addition to the city. You can read more about the plans here http://www.thisisplymouth.co.uk/pound-4m-plan-transform-diver-training-centre/story-17891072-detail/story.html

This is the artist's impression

I caught a posting on the JW forum the other day which sent a link to this website where there are two video clips apparently showing two navigators with different rigs. Worth a look. For those here in the UK rain, cold and misery be prepared to be envious; very, very envious!

Paul's post raised awareness of some video clips of a navigator using a balanced lug cat ketch rig; based in Perth, Western Australia .  The C-Fleet from the Old Gaffers group in Perth Western Australia sailed out to Garden Island then on to Carnac Island on the last day of 2012.

The video can be viewed here
http://www.gaffrigsailinginwa.org/videos/

The photos od the rigs can be viewed here
http://www.gaffrigsailinginwa.org/galleries/

One of the amazing things about the Internet is that you sometimes end up making overseas friends; people who you have never met but who share common interests. Wayne is one such person. He has a great navigator and blog. He is a great craftsman and sailor; a cool dad as well with a lovely family.  And what's more he is one of life's kind people. He took the trouble to post photos of how he set up his mizzen sheet and posted them on his blog at http://donumvitae.wordpress.com/
And all in response to some musings I'd made.

I am lucky to be able to call on good people like Wayne and Joel.
Wayne thanks for helping me out ......really appreciated

Using a jib and mizzen

Somewhere in the dark recesses of my mind, I remember John and Osbert offering some advice about what to do when faced with a situation where I would have to sail under just jib  and mizzen. I think Robin suggested that I move my mizzen sheet more centrally othe rear deck so it would be more accessible irrespective of whatever side I was happening to be sat on.  I didn't act on that advice  at the time but Tuesday's  experiences have shown me that I should have done and so one of the first things I will be doing in the next few weeks is to mount a bulls eye on the rudder stock head so that the mizzen can come centrally through the tiller stock. I'll also take a close look at how I might mount a cam cleat for it on the actual tiller itself. I have cleats for the up haul, down haul and the tiller tamer so here isn't much room!
John and Osbert suggested that I should learn to sail by adjusting sails. I missed that opportunity on Tuesday. I should have lashed the tiller centrally using the tiller tamer and then let out or pull in the mizzen sheet. In this way I wouldn't have lost speed. Letting the mizzen  go slightly would have meant that it would have caught the wind less and so would have steered away from the wind slightly........I think!
Wayne contacted me via the comments box and made several well considered points as always. They are worth reading and can be found on the bottom of the previous post. He raised the question "would I have been better off sailing under Double reefed main instead?" Good question, don't know but next time I will certainly give it all a try. In the meantime I will adjust jib, main and mizzen sheets so that they will all fall better in the rear aft cock pit area.

Sailing under jib and mizzen

Is not something I've had to do before (once I can recall, a couple of years ago). So I basically found yesterday a steep learning curve. Certainly I found it difficult neigh impossible to tack. Consequently there was plenty of gybing to change direction! I was able to do broad reaches easily; I could just about go upwind. We were averaging 4.5 kts; faster in the big gusts and there were some really  savage 25 kt+ gusts.

What do you do with the mizzen? As we went into the tack the mizzen would immediately hold us head to wind and we stalled.  If I slackened the mizzen it seemed to make no difference other than we lost speed.

And then there was the issue of steering. It seemed to be a constant battle with lots of tiller adjustments. To keep the course I wanted the tiller would often be at an angle. Now I did try steering by releasing and sheeting in the jib but it didn't seem to work that well.

Basically it was a frustrating sail which got curtailed because the gusts became so big that I started  to feel rather uneasy.  Sometimes you have to make a call; knowing when conditions have outstripped your experience levels. Yesterday afternoon was one such occasion.

If anyone can offer advice on how to sail using jib and mizzen then I'd really appreciate some tips via my comments box. Meanwhile is some film of my awful sailing attempts under jib and mizzen. Forgive me please.

The day didn't start as expected that was sure. A 10.00am launch plan was somewhat delayed by the flat battery on the car! Fortunately AA home start came to the rescue and from call to driving away with new battery took 35 minutes; which I feel is pretty impressive......so Happy New Year to the AA man Steve (THANK YOU Steve!).
Then poor old Arwen jammed on her trailer at the launch ramp. It took 15 minutes to get her moving (as opposed to the normal 60 seconds launch). That was when I also discovered a leak in my yacht boots; yes that's right; boots plural........now what are the odds on that eh?

The swans seemed pretty calm and unfazed by it all; and Arwen did float very nicely at her pontoon mooring. It is the first time she's been in the water since August 2012!
Anyway the forecast did say wind speed around 11 knots and gusts around 20 kts.
Below is a little taster of  the afternoon. Suffice to say it was a wee bit above 20 knots!