Every garden should have...

A little log store. This one is built out of scrap wood I had lying around in the garage. It accompanies the new fire pit....which contains volcanic pumice ash from Etna of all places.....

We don't have outdoor fires very often but with a cleared patio area and the old BBQ and patio heater sent to the recycling tip.....we are altering the evening ambience...😄 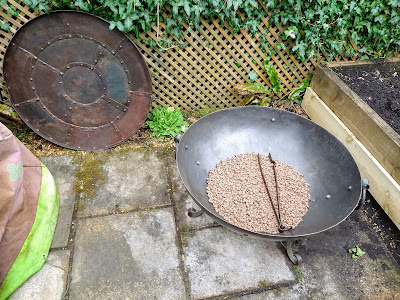 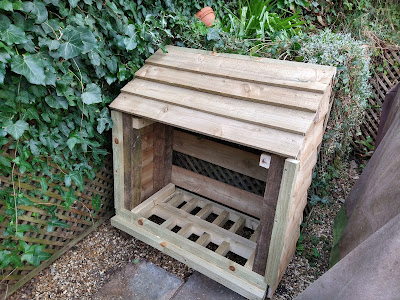 Should recreational sailors pay for the disposal of their expired pyrotechnic flares?

Now, this little news clip on page 10 of ‘Sailing Today’ caught my eye. “You pay for flare disposal” says government.

Apparently, the DOT wants leisure sailors to pay for flare disposal and it has put this proposal out to consultation which ends on 15th March. The department is proposing a ‘polluter pays’ principle. It says in the consultation document:

“The industry should have in place effective mechanisms and processes that facilitate the safe management, containment, storage and disposal of such items……and for which they are usually obliged to pay”

“It is perhaps not unreasonable, therefore, to encourage the recreational boating sector to adopt a similar approach in disposing of its own waste products”, the consultation says.

I’m not sure how I feel about this proposal so I’d welcome other peoples’ comments in the comment box below so that I can gain a range of perspectives to help me reach an informed opinion.

I used to take my expired flares to Brixham coastguard before it closed. Then Force Four chandlery took them when I bought a new set from them.  However, the coastguard scheme operating at 17 stations ended in December 2021 apparently, because their contract with an ordnance disposal contract came to an end. Hence the consultation now.  There are, so it seems, 360,000 flares in circulation throughout UK maritime waters, within any one three-year period!

So, why does this interest me?

Well, I carry flares onboard Arwen. Two red handheld, two orange smoke handhelds, a floating orange smoke. One white handheld.  I have no idea whether that is what I should be carrying – it came as a sort of inshore coastal waters pack deal.  I know that for recreational vessels up to 13.7m in length, there are no statutory requirements of safety equipment other than those required under SOLAS V. For recreational boats over 13.7m in length I think they have to carry a minimum of four red pyrotechnic flares (but I still need to check this fact so bear with me).

In truth, I’ve never been comfortable with pyrotechnics. I have used some whilst mountain rescue training many, many years ago. I’ve never used any in a boat. I found them unpredictable to say the least; but that could be due to my unfamiliarity with using them.

It strikes me that they are now an antiquated method of distress alerting. After all modern technology seems to provide safer, more reliable alternatives to pyrotechnics. There is EPIRB, PLB, VHF DSC, AIS for a start – some of that I carry on Arwen (smartphone AIS plotter, PLB (with SAR tracking, various navigation apps)). I have a handheld VHF but it does have the obvious limitations regarding range, line of sight etc. As a general rule, I very rarely travel more than four miles off shore when sailing the south Devon and Cornwall coastlines, so do I need ot carry pyrotechnic flares at all?

Most of this techie stuff is affordable and seemingly far safer to use than rolling about in a sinking boat trying to light a flare which then lasts a few seconds (orange smokes excepted). But then, in fairness, I have never had to use any of the technology in a distress situation whilst at sea, so maybe I don’t know enough about this to make any valid points! And if all else fails, an orange floating smoke in an emergency will be very welcome, thank you very much.

On the other hand, I only carry a limited number of orange smokes and these could be used up pretty quickly without any guaranteed success in an emergency situation.  The red flares will burn for no more than 15s max I suspect. There is no guarantee that anyone will see them and then go on to alert the emergency services. In fact, the RYA lists a whole number of problems with using pyrotechnics, not least of which is their limited three-year serviceable life and the disposal of them afterwards.

As I said before, I know that the regulations are clear that I don’t need to carry any pyrotechnics whatsoever on my boat given its size. Recreational boaters below 24m in length (that’s their boat, not themselves) are free to choose what means of distress alerting and location they wish to carry according to the RYA summary of the guidance. But they also say…… “The RYA strongly recommends that recreational craft carry both a means of distress alerting and a means of indicating location should Search and Rescue (SAR) services be required”. I’m sure my VHF, smart phone and PLB cover this.

And so, to my main issue with this consultation: electronic visual distress signals (EVDS). Known to some as laser flares, they are handheld non pyrotechnic devices which work out cheaper, safer, easier to use and easier to dispose of than traditional pyrotechnic flares. However, they are not currently recognised as an international distress signal in COLREG Annex IV. So, they cannot be considered a means of initiating distress but can be used for visual location once a distress alert has been sent (MCA recognition in Marine Information Note 542M+F).

Now I know I am not a brilliant, experienced sailor; I know my experiences are limited to basically messing about in a small boat on inshore coastal and estuary waters. But, surely, it is time for the MCA to recognise that small boats in particular shouldn’t be carrying dangerous pyrotechnics and that there is a wealth of other better technology for distress alerting out there and this includes making EVDS part of that solution.

Rightly or wrongly, I feel pressured into having old pyrotechnics onboard even though I have other better distress alerting technologies available to me. I know it’s a self-imposed pressure born out of paranoia and a healthy self-preservation, major risk adverse instinct. But I wonder if there is a need for the government to come really clean about what recreational boaters need to carry in terms of distress alerting equipment – the RYA and RNLI have useful information on it. Is it time for research on the effectiveness of EVDS to be published and their inclusion into COLREGs be made, if it hasn’t been done so yet? Surely the common sense, sustainable approach is to try and reduce the number of old-style pyrotechnic flares being used in the first place. Then there wouldn’t be a disposal problem and the need for another cost added to boating! Should the government, MCA and other regulatory bodies now include EVDS’s? Would they be useful as a distress signal during daylight if all other distress alert technologies you had, had failed?

As regular readers of this blog know, I am oft to comment how simplistic my views often are and how generally naive I am about marine issues. I sense I am being rather naïve now, so fire away, give me your thoughts in the comment box below. Educate me towards a more enlightened perspective on this issue and consultation because at the moment the sceptic within me says the government has just found another money-making venture whilst my more ‘trusting’ soul says its right we should pay – it’s the sustainable fair way of resolving the problem and why should the MCA cover our costs?

Arwen gets a spring clean

I got out in Arwen four times during 2020. That is our worst sailing year together. The reasons are obvious - a number of lock downs, but even so!

My first trip was 24th June and we did a five hour sail around Plymouth Sound in ESE to SE winds at a steady 10 knots with gusts up to 18kts. It was a 4.8m outgoing tide.

The second trip was 1st August. six hours sailing in F3/4 winds with gusts to F5. We went out to Draystone Buoy and Rame Head and it was very rolly. I remember that trip - I was seasick. I fell on a hatch badly and hurt my knee. The reefing system broke.

We went out again on the 8th and then the 13th August as well. The first trip I was accompanied by Mag, her annual boat trip. Over to Cawsands, cup of coffee, sail back along the outer breakwater. Light winds, cloudless skies, 24C.

On the last trip I was seeking out the porpoise, the tuna shoals and Minke whales. Found all except the whales. Could hear them but couldn't see them. Got some great views of diving gannets and two sunfish, so that was a good bonus. Nice SSW breeze, very light. Apparently I went up to three miles past the breakwater on the way to the Eddystone lighthouse.

Well, with the PM announcing his road map I hope to do more sailing this year than last. Admittedly there are some trip away in the motorhome that interfere with sailing plans but I should get a huge chunk of the summer. I should be able to go out on the water again from March 8th.

And towards that aim, Arwen came off the drive for the first time since August. She was as you can see from the video, in a bit of a state. However, four hours later and she was clean, well clean-ish, with some areas for maintenance identified and her interior lockers tidied up.

It was good to get back on board her even if it was just dream sailing along our road!

https://youtu.be/fuddmNFIGJk
Posted by steve at 22:25 2 comments:

A talk by John Welsford to the Dinghy Cruising Association

John did an outstanding talk to the Dinghy Cruising Association at their AGM in February. You can find it for free here on the DCA website. Enjoy, great thinking and small boat building philosophy.

If you are into dinghy cruising and haven't yet heard about the Dinghy cruising Association, take a good luck around their website and go download one of the free copies of their much regarded Dinghy Cruising Journal.