Joshua Slocum was born in the ‘fair land of Nova Scotia, a maritime province, where there is a ridge called North Mountain, overlooking the Bay of Fundy on one side and the fertile Annapolis Valley on the other'. 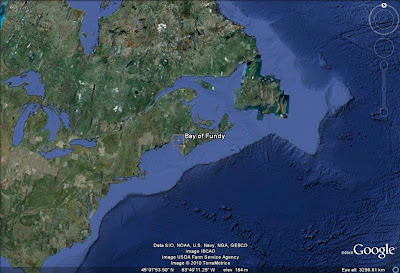 The Bay of Fundy Nova Scotia


He described the people of this coastline as hardy, strong, robust and predisposed to working in shipping commerce. Both sides of his family were sailors. His father was....’the sort of man who, if wrecked on a desolate island, would find his way home, if he had a jack-knife and could find a tree’ (My dad, bless him, is the kind of man , who if a steam train broke down, could fix it with elastic bands and a Swiss army knife! – I sort of know the type!)

I loved reading chapter one. Slocum has an endearing writing style – straight talking and reflective. He’s not prone to boasting and makes many an understatement about things which frankly are extraordinary. You can read the full chapter 1 text here at this site for free (http://www.bluemoment.com/slocum.html )

‘I met an old acquaintance, a whaling captain, who said “come to Fairhaven and I’ll give you a ship. But” he added “she wants some repairs”..........The next day I landed at Fairhaven......and found that my friend had something of a joke on me.....for the ship proved to be a very antiquated sloop called “Spray”, which the neighbors declared had been built in year 1”

Felling a stout oak tree and ignoring the gossip and concerns of neighbors (“will it pay?”), Slocum employed a local farmer to haul the timbers and he rigged a steam box and a pot for a boiler. He steamed the timbers for ribs until they were supple and then bent over a log where they were secured until set. When he fitted the new stem it was pronounced “fit to smash ice”. It should have been – built from the finest pasture oak; the stem went on to split a coral reef in two at the Keeling Islands without receiving a blemish upon it!

‘Spray’s’ planks were Georgia pine an inch and a half thick. The bulwarks were built of white oak stanchions fourteen inches high and covered with seven-eighth- inch white pine. The deck comprised of one and a half inch by three inch white pine spiked to beams, six by six inches, of yellow or Georgia pine, placed three feet apart.

“Grave fears were entertained by some at this point that I should fail. I gave myself some thought to the advisability of employing a professional caulker. The very first blow struck on the cotton with the calking iron, I thought was right, many others thought wrong. “It’ll crawl” carried many a person, as they watched me drive white cotton into the seams. ...........I drove a thread of oakum on top of the cotton, as from the first I had intended to do. The cotton never crawled!"

When finished the ‘Spray’s’ dimensions were 36 feet nine inches long overall, 14 feet 2 inches wide and four feet 2 inches deep in the hold. Her tonnage was 9 tons net and 12 tons gross. The cost of his new vessel? $553.62 for materials and thirteen months of his own time! Sorry I couldn't find a source for this photograph: from Goggle images


I’ve read mixed reviews of ‘Spray’s’ seaworthiness. Some have argued that she was stable under most circumstances but being so shallow drafted would easily capsize if heeled beyond a relatively shallow angle. Yet, with so many copies having been built and replica voyages made – there have been no recorded incidents of a ‘Spray’ having been lost at sea. Some have worried that her internal ballast may well shift. In his book "Captain Joshua Slocum", Joshua's son Victor Slocum stated that "the ballast was concrete cement, stanchioned down securely to ensure it against shifting should the vessel be hove on her beam-ends. There was no outside ballast whatever. The Spray could have been self-righting if hove on her beam-ends, a fact that was proven, since, by an experiment on an exact duplicate of the original boat and ballasted just like her. The test boat was hove down with mast flat to the water and when released righted herself." Slocum, himself, did not seem unduly worried.....

"I have given in the plans of the Spray the dimensions of such a ship as I should call seaworthy in all conditions of weather and on all seas."

"I may some day see reason to modify the model of the dear old Spray, but out of my limited experience I strongly recommend her wholesome lines over those of pleasure-fliers for safety."

When Joshua sailed the ‘Spray’ on that first circumnavigation – she was a different boat to the one he first discovered propped up in the pasture. He added 12 inches to her original freeboard amidships (eighteen inches forward and fourteen inches aft). Increasing her sheer would make her a better deep water boat he thought.
“Our young yachtsmen, pleasuring in the "lilies of the sea," very naturally will not think favourably of my craft. They have a right to their opinion, while I stick to mine. They will take exceptions to her short ends, the advantage of these being most apparent in a heavy sea”.


“Some things about the Spray's deck might be fashioned differently without materially affecting the vessel. I know of no good reason why for a party-boat a cabin trunk might not be built amidships instead of far aft, like the one on her, which leaves a very narrow space between the wheel and the line of the companionway. Some even say that I might have improved the shape of her stern. I do not know about that. The water leaves her run sharp after bearing her to the last inch, and no suction is formed by undue cutaway”.

Slocum did away with things such as overhanging fantails, popular on cruising boats at that time. He argued that fantails should be avoided at all costs on any boat that was going to “cross the Gulf Stream in a nor'easter, and offshore”.

Originally ‘Spray’ was sloop rigged on her voyage from Boston through to the straits of Magellan. The stormy seas encountered there forced Joshua to change the rig to that of a yawl since it reduced the size of the heavy mainsail and improved her steering qualities into the wind.

“When the wind was aft the jigger was not in use; invariably it was then furled. With her boom broad off and with the wind two points on the quarter the Spray sailed her truest course. It never took long to find the amount of helm, or angle of rudder, required to hold her on her course, and when that was found I lashed the wheel with it at that angle. The mainsail then drove her, and the main-jib, with its sheet boused fiat amidships or a little to one side or the other, added greatly to the steadying power. Then if the wind was even strong or squally I would sometimes set a flying-jib also, on a pole rigged out on the bowsprit, with the sheets hauled flat amidships, which was a safe thing to do, even in a gale of wind. A stout downhaul on the gaff was a necessity, because without it the mainsail might not have come down when I wished to lower it in a breeze. The amount of helm required varied according to the amount of wind and its direction. These points are quickly gathered from practice”.

All the sails were hoisted by hand; the halyards were rove through ordinary ships' blocks with common patent rollers. The sheets were all belayed aft.

The windlass used was in the shape of a winch, or crab. There were three anchors, weighing forty pounds, one hundred pounds, and one hundred and eighty pounds respectively. The ballast, concrete cement, was stanchioned down securely. There was no iron or lead or other weight on the keel.


“But see the run the Spray made from Thursday Island to the Keeling Cocos Islands, twenty-seven hundred miles distant, in twenty-three days, with no one at the helm in that time, save for about one hour, from land to land. No other ship in the history of the world ever performed, under similar circumstances, the feat on so long and continuous a voyage. It was, however, a delightful midsummer sail. No one can know the pleasure of sailing free over the great oceans save those who have had the experience. “

“I may some day see reason to modify the model of the dear old Spray, but out of my limited experience I strongly recommend her wholesome lines over those of pleasure-fliers for safety. Practice in a craft such as the Spray will teach young sailors and fit them for the more important vessels. I myself learned more seamanship, I think, on the Spray than on any other ship I ever sailed, and as for patience, the greatest of all the virtues, even while sailing through the reaches of the Strait of Magellan, between the bluff mainland and dismal Fuego, where through intricate sailing I was obliged to steer, I learned to sit by the wheel, content to make ten miles a day beating against the tide, and when a month at that was all lost, I could find some old tune to hum while I worked the route all over again, beating as before. Nor did thirty hours at the wheel, in storm, overtax my human endurance, and to clap a hand to an oar and pull into or out of port in a calm was no strange experience for the crew of the Spray. The days passed happily with me wherever my ship sailed.”


“To face the elements is, to be sure, no light matter when the sea is in its grandest mood. You must then know the sea, and know that you know it, and not forget that it was made to be sailed over. “

I’ll keep that in mind when I plan my next extended voyage in Arwen – probably a run from Plymouth down to Fowey and back...but more on that idea in a future blog!