Funny old thing is life. Just as I was cursing my bad luck, a fortuitous stroke of good luck befell me. Regular blog readers will know I have ordered a telescope. I have taken up astronomy and the telescope will accompany us in Bryony our motorhome and onboard Arwen for some trips. You can read about the telescope and what I have been learning about amateur astronomy in previous blog posts or you can pop across to https://wherenexthun.blogspot.com for more detailed posts.

Anyway, said telescope was due at the end of February. Then it got delayed to the end of March. Then “It’s possible that it is on one of the crates on that ship in the Suez Canal”. Now it is due at the end of April! I’m not holding my breath on this one. A shortage of raw materials, a lack of workers, a shortage of shipping crates and uncertainty in supplies and back orders apparently.

So, the fortuitous good luck? Whilst browsing Facebook ‘market place’ for something entirely different, I “accidently” came across a table top, 4” Newtonian Dobsonian, beginner’s telescope in good condition; hardly used in fact. 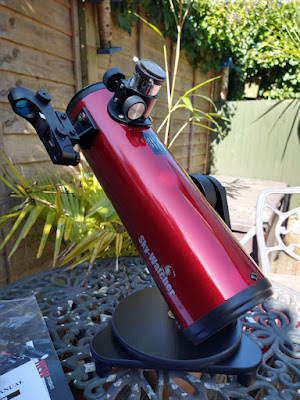 I promptly checked out the prices of new ones and discovered that you couldn’t get one new for love nor money anywhere in the UK at this moment in time. Every telescope stockist known to man this side of the English Channel is ‘out of stock – awaiting new orders’.

And here was this one, barely used and just under half the price of a new one. By the time I had contacted the seller it was too late. He had someone coming to see it that morning. So disappointing; but imagine my glee when three hours later the seller contacted me to say the buyer hadn’t turned up. “Would you like to buy it?” Would I like to buy it? Would I….never mind!

It turns out that he hadn’t used it once. The little plastic insulator tab was still in the battery compartment. Brand new - what a stroke of luck. 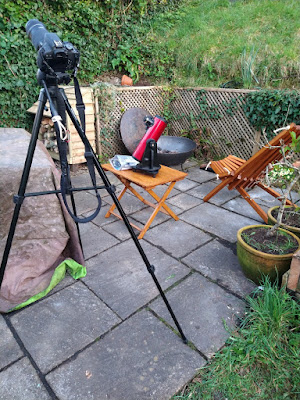 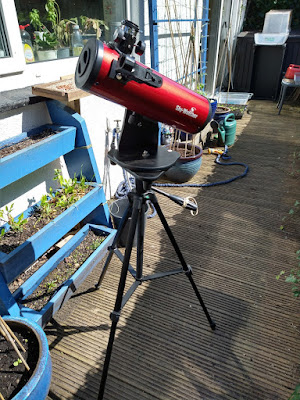 And so, I have been out on two sessions under the stars putting into practice what I have learned so far. Which turned out to be nowhere near as much as I thought I had!

Session one was a shambles. I couldn’t find the stars or nebulae I was looking for. I couldn’t get the finderscope to work properly and I hadn’t aligned it correctly. A misaligned red dot finderscope on a telescope is a devious creationist thing of Satan! Let’s just leave it there shall we! 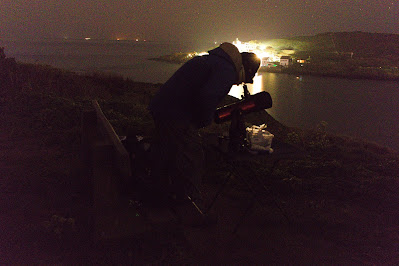 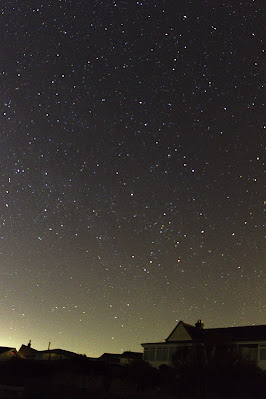 I dropped eyepieces in the dark. I kept leaving my red light on my headtorch on full beam. I couldn’t use higher magnification eyepieces because I kept losing the star I was looking at; don’t get me started on how to use a Barlow lens! 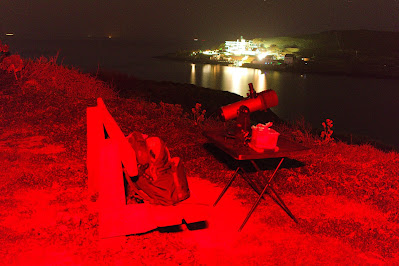 I tried to align the smartphone holder, in the dark. That’s an hour of my life I won’t get back again! 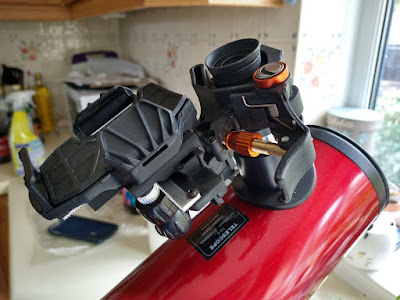 So much easier to align the smartphone holder in daylight!

You have to be a contortionist to use the finderscope. It has a red dot which seems to migrate within the viewfinder on its own accord. If the telescope is elevated at an angle of greater than 45 degrees, you have to virtually lie on the floor to be able to sight up the finderscope. They advertise it as a table top telescope for beginners. Are these beginners fairy folk?  You’d have to be the size of a barbie or action man to sight up this scope. Or you would need a table which is five feet high!

And then, just as you focus on something interesting, it moves out of view. So, you have to chase after it, only you have to remember that the image is upside down and reversed so the way you think you need to move the tube assembly is actually wrong, it’s the ‘other’ direction!

Meanwhile, to actually look down the eyepiece requires back breaking bends and after a few minutes, you can’t physically straighten. Throw in extreme cold, biting winds, stumbling around in the dark, a completely useless set of planetarium apps because you chose the only spot in your locality which doesn’t have any form of smart phone signal and hey it’s a challenging night! 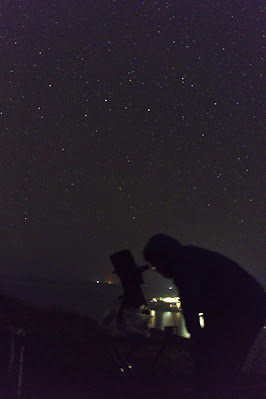 And yes, I adored every minute of it! I am well and truly hooked.

Of course, it doesn’t help if you are trying to learn two separate things simultaneously. There is astrophotography – taking photographs of night landscapes and night skies; and there is astronomy – learning about the night sky and using a telescope to view night sky objects. Trying to learn both at the same time is …… courageous, challenging, stimulating …………. stupid!

But hey, being stupid, can sometimes be really, really fun can’t it!

PS: the photo below is the result of my second night session and I have outlined the details below.

“Last night was my first proper astrophotography session. I am trying to get to grips with two things - learning basic astronomy using a Newtonian telescope and astrophotography - using a DSLR camera and lens without a star tracker. I'm starting from a base of no knowledge whatsoever, but ever the lifelong learner.............. 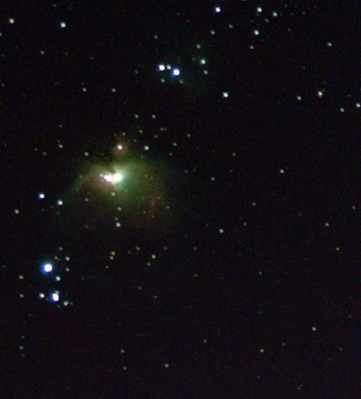 No calibration frames and no star tracker.

I used the software program DeepSkyStacker for the very first time and then loaded the image up into Affinity Photo which is also new to me. I have never used Photoshop or Lightroom...so the learning curve has been steep to say the least.

This is my first effort. I will get better!

Messier 42, NGC 1976 - Great Orion Nebula - one of the brightest nebulae in the sky, one of the nearest star forming regions to our planet, Earth.  It is visible to the naked eye as a hazy patch surrounding the middle star of Orion's sword - Theta Orionis. The sword is just south of Orion's belt.

It is a diffuse emission nebula. If I were able to use a star tracker and longer exposure times, the nebula would appear redder and more violet-blue in colour. The greenish tint is caused by radiation from doubly ionized oxygen. It is 1350 light years away from us and is approximately 24 light years across in size. The youngest brightest stars within it are thought to be about 100,000 years old and emit large quantities of ionizing ultraviolet radiation, thus causing the nebula to glow by fluorescence.

There are approximately 700 stars in various stages of formation within this nebula.

Rubbish photo but what marvels of the multiverse there are to see if we take the time to look up occasionally”.