Well I managed to get an hour working on Arwen today. There have been so many family commitments recently that I’ve barely had any time to think about poor old Arwen. And school work? Ugh, it’s been several 70+ hr weeks in a row and it isn’t about to get any easier either....but that is beside the point.


I did manage in an hour this morning to finish putting the remaining 2 Lt soft drink plastic bottles into the side, centre and forward lockers. Regular readers will remember that having read about Robin’s story of his hatches popping off when he hit a reef, I decided to take some precautions, namely filling some storage spaces with these large bottles which won’t float out of any damaged planks or through hatch holes if water rushed in from an outside puncture and the hatches popped off due to the pressure.

I also managed to put on some old blocks I had lying around to each anchor chain so that I can set up a pulley system for anchoring off the beach. It is a simple mechanism. One end of the floating rope which will have a stainless steel clip attached to it next week, is attached to the bow ring. The rope is then run through the pulley on the bow anchor and runs until it reaches the rear anchor chain where it runs through another pulley block. The end of that rope then has another stainless steel clip on it. This clip attaches to a rope hawser loop , the ends of which attach to the two rear port and starboard fairleads. I will draw out a picture of the system and post it in a separate post when I get a few moments peace and quiet again. 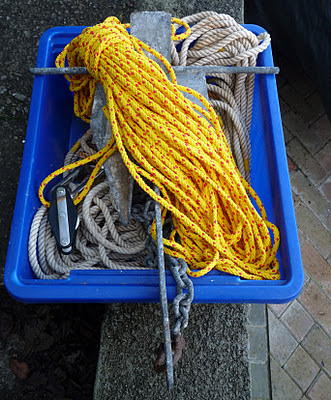 the pulley rope (yellow floating line) attached to the anchor...this is the rear anchor ...do they call it a kedge anchor? It gets stored in a tray which is bungie clipped to the floor on the port forward well alongside the centre case. A thick 1" rubber mat goes over it and the whole lot is bungied into place so that it does not tip out in event of a capsize. I can also stand on top of it quite happily without damaging me delicate feet!


You can see how it will work. I approach Cawsand beach which is a shingle beach with a fair shelving slope on it. I drop the bow anchor about 20m out, assuming it is a rising tide, having clipped the yellow floating line shackle onto the bow eye very carefully beforehand. I then continue to motor in until Arwen’s bow gently touches the beach, the floating rope running down the port side of the boat AWAY from the slowly running engine mounted on the starboard side of the transom. Pulling up centreboard, rudder and engine, I then jump out with the stern anchor and run up the beach and bury it. I clip the shackle from the yellow floating line onto the hawser running from the transom, Push Arwen back off the beach and then I haul on the yellow rope. Now if everything works, Arwen’s bow should head back out to sea for a little distance...so that she isn’t in the small waves and broaching sideways. I can tie off the floating rope on the anchor chain on the beach and hey presto....I have a picnic stop. I keep an eye on the line, letting more out periodically. When read, I pull the rope so that Arwen comes back to the beach. I gather up the anchor and the floating rope and stow the anchor. I then pull on the floating rope to pull Arwen back off the beach. In the deeper water, down go engine, rudder and centreboard; engine is started and kept in neutral; up comes the anchor on the floating rope and it gets stowed; and then off I go! 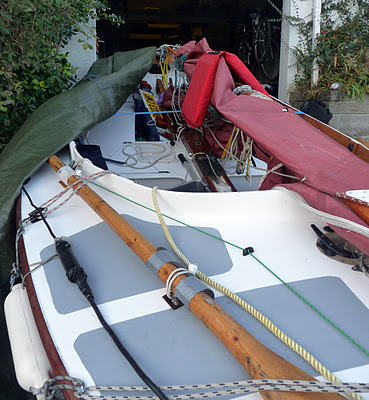 Arwen on the drive....I'm resisting taking out the sails for winter stowage just in case the weather gives me one last day at a weekend for some sailing......but I suspect i live in hope more than possibility. It is November, the nights have drawn in, it's colder, the wind is gusty, it's wet.......I am such a wussy fair weather sailor aren't I......I should be ashamed of myself!

we have had a friend say that maybe the loop between the anchors should be a continuous one and the boat should be tied on with a painter to the loop so that Arwen can then drift and turn to face the wind as and when. This seems eminently sensible to me although the system I saw working was the one I have rigged now. I quite like the painter idea as the better option.

Hello Dhanvanthri engineers. Thanks for the comment and praise. Interestingly, I have rarely used the pulley system. I carry an anchor buddy on board which was given as a present and have used that a couple of times.