Lazy jacks......they are occupying too much of my mind at the moment. When you have limited brain cells and a short term memory problem, then this is not a healthy use of the tiny cells. Especially with A Level marking and module preparation lurking in the wings! Then there is the continuing saga of ‘Stacey’ our motovespa restoration (just don’t get me started on that one).


Arwen’s lazy jacks don’t seem to be working as I’d planned. No surprises there really. Nothing I plan ever actually works in reality! When out sailing last week the forward end of the upper yard managed to go the wrong side of a lazy jack (I’m still trying to work out the physics momentum that allowed it to happen) with some serious consequences; namely the mainsail didn’t fully lower. In fact it got jammed half way down the mast and involved some jumping up and down and severe arm stretching to ‘bounce’ the yard back down the mast. Fine when you have a very competent sailor guest on board who can steer Arwen into the wind. A complete nightmare if I had been single handed! I also noticed that after tacking the top yard had managed on several occasions to move from its normal starboard side of the mast to end up on the port side of it....so it had managed to ‘dip’ itself as well!

I really am a lousy sailor/sail trimmer aren’t I! I have this unique ability to overcomplicate the simple!

The original intent behind the lazy jacks was to help ‘catch the sail’ as it was lowered. I found that when lowering the sail – the upper part of the yard would come down first, rapidly, and with the slightest puff of wind, end up in the water alongside the boat. Extremely irritating! Or it would clonk me on the head...even more irritating and a test of my knowledge of welsh depletives!

Of course with the sail configuration I have it hasn’t passed my small brain that maybe my sail just isn’t designed for lazy jacks. I have this standing lug rig type sail that when you haul up the mainsail, the top yard is down in the boat and all of a sudden hauls near vertically upright – short mast tall sail type arrangement. When you lower it there is a sudden point when the top most part of the yard suddenly rushes down into the boat whilst the forward end which was facing downwards suddenly looks upwards! So maybe lazy jacks just wouldn’t work with this system anyway!

So what does my current system look like? Difficult to describe in words but I’ll give it a go. Imagine the mainsail is up.........a rope is tied off on one side of the sprit boom towards aft end near clew of sail attachment point. This rope runs up the port side of the sail, through a block attached to the mast band and down the other starboard side where it runs through a pulley block and out towards the forward end of the boom (let’s call this rope end A). Now half way down the starboard lazy jack rope is another pulley which has been tied into it using an overhand knot. Rope end A now goes upward and through this block and then down vertically to the sprit boom (at a point about two thirds of the way along towards the mast). During sailing rope end A is coiled and tied off and hangs on a cleat attached to the boom. If I pull on rope end A it acts as a topping lift and the aft end of the boom rises upwards. If I leave it alone coiled and hanging off the cleat then the system acts as a lazy jack and in theory the main sail should fold down between the port and starboard side lines. On occasions it has worked brilliantly....and then on some occasions.......it hasn’t! I can’t remember where I saw the system but I think it may have been on a postboat somewhere.
Now I could simplify the system. I could have what I call the traditional lazy jacks which seem to have a sort of ‘triangle of rope’ affair at their base which go under the boom. Each rope either side of the sail could ‘clip’ into a mast head attachment with simple carabineer clips. However, I’m sure that this system is going to foul the bottom of the sail which goes below a sprit boom...so I’d need to get around that. Also I wouldn’t be able to use it as a topping lift. So maybe I need a system where the line runs up to a block at masthead and then down the mast to a cleat. I think it would look similar to the Harken system illustrated below. 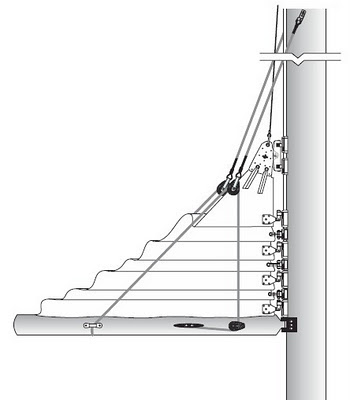 I read somewhere of another method which is similar. Start from a cleat on the port side of the mast at the step and run a line up to just above the highest point where the lower end of the top yard will rest against the mast when the sail is raised, and at that point, fix a hanging block. The rope goes through the block and back down, aft, to the end of the main boom and under the boom through a fairlead under the boom to keep the line in place. From there it runs back up to the starboard side of the mast, to a block on the opposite side of the first one, and then back down to another cleat on the mast at the foot. Now, from these main lines, splice in however many lines are needed, running straight down and under the boom and straight back up again. Ah splicing! A dark art and something else to think about!
Of course if I had any sense, I’d just ask the forum members...I wonder what other navigator owners do...and do they have the same problem of the falling sail blowing outboard? I’ll let you know their sound advice on this matter.