reefing a sprit boom yawl rig....how should it be done?


Lands End to St Davids Head including the Bristol Channel 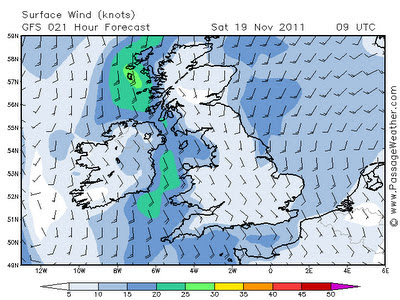 copyright: passageweather.com
Plymouth is down on the south west peninsula

I must be mad!  I'm taking Arwen out in a force five tomorrow..........and that's a new one for us both!  We are having a guest on board though. Someone who is thinking of building a navigator and wants to see one, sail one and get a feel for a yawl rig.

Well tomorrow should certainly give that!
It's high tide at 11 am a 4.7 metre. Low tide is 5pm ish with a tidal height of around 2m.  We are setting off at 10.00am and will probably be out on the water for four hours arriving back at pontoons in QAB at around 2.30 ish. This should give sufficient water underneath to get Arwen out of the briny although the tide will be falling fast.

Secretly I'm looking forward to it although I am nervous. I haven't sailed in winds like this before. I'm a tad worried about the reefing system too.  I saw how Wayne had reefed his sail below and I don't do it that way which has thrown me into a bit of a quandary.............................am I reefing it correctly? 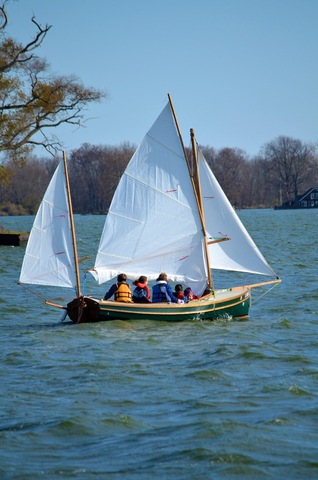 copyright Wayne
He looks to have lowered the mainsail at the mast top; and rolled up the sail from the bottom. he doesn't seem to have reefing ropes through the sails like I do
truthfully, it looks far quicker; far simpler and less up top than the way I do it
I have a sneaky feeling I've got it wrong........again!

I have a sort of slab reefing system in which I lower the main slightly and unhook the tack down haul; which I then reattach at one of the higher reefing points. I pull the reefing line and it pulls the sail down in to some loose folds along the sprit boom. I then braille up the loose folds and tie them using the reef ties on the sail. Then I re haul the main up and tension the down haul. Now the sail doesn't really fall lower than the sprit boom - the Brailled up bit sort of lies alongside it.......so am I doing this right?  I will have to ask my guest. He is an experienced sailor so he hopefully will have some thoughts on this. But....looking at what Wayne does.....I have a sneaky feeling I've got it wrong again....if any readers can enlighten me as to the way I should be reefing the sail I would really appreciate it.

But what will our guest think of Arwen? What about those dents and dings I haven't got around to touching up; and what about that slip up where I scarfed the two rub strakes together and they split whilst setting without me realising - shambolic joint that one! She is rather rough and ready and I do love her so......but she isn't what I'd call craftsmanship like you see on Rob's, Kevin's, Joel's or Wayne's boats. They are craftsmen. Me....I sort of manage to glue it together in some semblance of a boat shape. I do hope I do John's design some justice!

But secretly, I'm really looking forward to getting out on the water. It has been tough at work, too many 65+ hour weeks. I need the break and Arwen needs the sea. She gets depressed sitting on the trailer on the driveway.....her skin turns mouldy!

PS Wayne I do hope you don't mind me poaching your photo to illustrate my dilemma.

Please don't make comments about my superior craftsmanship. Maria and I might hurt ourselves laughing. Do you have any clue how many epoxy "goobers" Good Enough has? I think Arwen is probably every bit as well made as Good Enough. You can poach my photos anytime you would like.

Regarding reefing, Good Enough is set up pretty much per plans. The main halyard attaches to the yard with a spool shackle. I have an auxiliary line to keep the main halyard from crawling up the yard. It is tied in a loop around the yard just above the halyard. The lower end is tied to a snap shackle which passes over the far side of the mast and clips to the lower saddle on the yard. This line doubles as a parrel. So far, it seems to work well.

I shackle the clew to a saddle at the aft end of the sprit boom. About 200-250mm forward of this saddle I have a cheek block on the port side of the sprit. The reefing line runs from a splice around the saddle, up through the aft reefing grommet, down around the cheek block, and forward to a horn cleat.

To reef the sail, I ease the downhaul, then lower the main halyard (currently doing it by guess and by gosh) and cleat it off. I hook the s-hook through the forward reefing grommet and re-tension the downhaul. I next ease the snotter, pull the reefing line as far as it will go, then cleat it off and reset the snotter. Finally, I have four reef ties that I tie around the big bunch of sail at the foot. These are NOT tied around the sprit boom.

I was only sailing in force 4-5 winds, and I can tell you that weight in the boat is your friend. She was much happier with 3 adults and 3 kids than 2 adults and 2 kids. If you have 2 sets of reef points, you probably want to start with both tied in. Also, don't be afraid to use just jib and mizzen for docking. The boat is much more docile with the main in the boat.

Best of luck on your voyage! I can't wait to read about it.

Sorry didn't mean to give you both heart attacks with mirth! I think I have an older version of plans but your comments are really helpful.

What is a spool shackle - excuse my ignorance and what does the auxilairy line do? The reason I ask is that I just tie the main haliyard straight onto the yard...so there may be an issue there I think.

"The lower end is tied to a snap shackle which passes over the far side of the mast and clips to the lower saddle on the yard. This line doubles as a parrel. So far, it seems to work well".

Now this seems a good idea Wayne - I quite like that. I use a loop of line which is the tail end of the main halyiard to go around the mast and it ties back onto the yard....but the lower forward end of the yard bounces around and sometimes during a tack suddenly dips and switches sides of the mast...very baffling and I still can't explain how it happens.

The reefing bit - although I have it slighlty differently, having read what you do, I'm not far off that - I think I've realised I don't lower the mainsail enough and actually I pull it back up when reefed and that's my mistake. That's why my brailled up sail seems higher than yours. A real 'dur Homer' moment for me again.

Thanks for taking the time to reply Wayne, I really appreciate it and 'good enough' looks fantastic. I am so pleased your family are enjoying her so much

A spool shackle is a rather innovative device that is well detailed by the manufacturer at http://www.tylaska.com/spooldirection.html.

I noticed that when I simply tied the halyard onto the yard, it would tend to crawl up the yard due to the downhaul tension.

The auxiliary line is simply a length of leftover dyneema from the stays. I have a loop loosely tied around the yard just above the halyard. The other end is, as mentioned tied to a snap shackle. This end is simply passed around the far side of mast and clipped to the saddle at the throat end of the yard. This allows the yard to move aft a bit when it is lowered, making it set neater in the boat.

Once hoisted with the downhaul tensioned, the halyard will slide up the yard until it is stopped by the auxiliary line mentioned. This also tensions the auxiliary line, causing the yard to be held against the side of the mast quite firmly, with no flopping. It also causes the hoist point to be somewhat aft of the mast, which seems to help with the dreaded crease as well.

I hope this explanation clarifies things a bit. I will try to do a detailed set of posts on rigging when I get her ready next spring.