lazy jacks...haven't got the right at all

Arwen is a great boat to sail and my guest today thought so too. He's thinking of building a Navigator and I think he left with very favourable impressions although I think he will definitely opt for a different rig to mine.  I have to say I really enjoyed the day. Arwen's guest was great company and an 'instinctive' sailor who was clearly very experienced. He was able to pinch her close to the wind when close hauled and she sailed really well under his helmanship through lumpy swells rolling in through the western breakwater entrance. The winds were on occasions SSE and it was an outgoing tide - so some rollers were pretty steep. He was, I think, very impressed with the way Arwen when gently over the top of them and down the other side with barely a  drop of spray coming inside the boat.

We spent the day chatting. He was able to ask questions and we discussed what went well and not so well - like the bottom bow planks and that infernal compound bend which splits planks!! I suggested he do a simple canoe or kayak first to get used to epoxy, painting etc. I know it helped me enormously with basic skills. We discussed navigators that we admired.....Barrett's Yuko, Joel's lovely teak deaks, the lovely work on Wayne's 'good enough'; the mast arrangement on Rob's Annie...and many more. I managed to find some very rare photographs of the kayak I built in practice for doing Arwen. I built it from chesapeake light craft plans. I think it turned out OK. I sold it to some guy up north who wanted to go along the canal network. 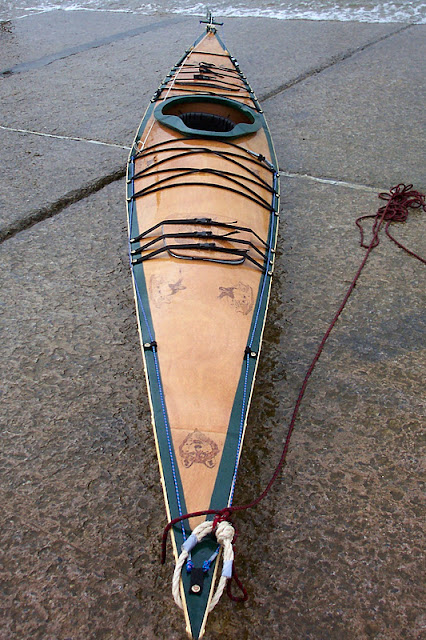 the one I did before Arwen...to get a feel for woodworking skills and using epoxy
this is the boat which had my good lady ill with laughter
she still claims it is one of the funniest moments she's ever had with me when I discovered I'd made two identifical left hand sides and so couldn't stitch them together! 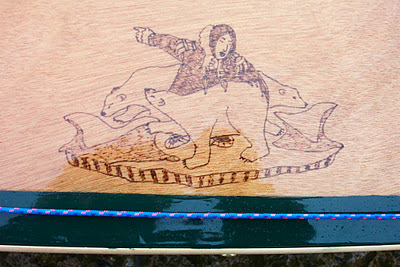 as always I burned with a soldering iron some designs into the wood
I never found the website again, where I saw this picture and I've never been able to acknowledge teh artist, but it was a lovely drawing and it took me hours to copy and adapt it for buring in to a deck
if anyone knows who the artist was let me know 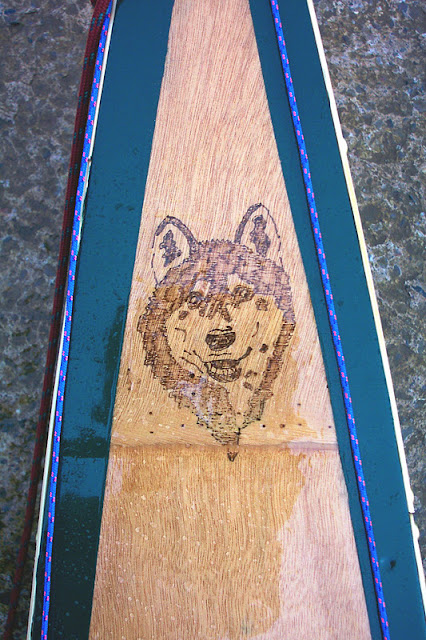 another pencil sketch which took ages to work out and burn in
I loved this kayak....but I never was a kayak fan

We sailed across to Cawsand bay in 35 minutes (which must have given us about an average speed of 4.5 kts or so in 14kt winds. The extra ballast in the form of said guest made all the difference and we didn't need to reef. Arwen behaved well and shot along nicely. From Cawsand it was back across to Jennycliffe and then around the front of Drakes island and up through the bridges. That was an interesting experience because the wind was SE and so we were pinching relly close to go through the bridges and avoid the dreaded dragons teeth (the WW2 antisub traps). Our guest cleared the pillars with about 2' to spare on the port side - it  was outstanding seamanship in difficult conditions. Very impressive sailing I must say.  I learned a lot today, not least of which is I still need to learn about what 'line/angles' to take ; and how to take a line/angle accounting for leeway. Our guest did it instinctively and brilliantly.

I found it really refreshing to be able to stand up, hand over the helm and potter about Arwen. I like it when my friend who owns a postboat comes with me too. He's another experienced sailor with a great instinctive feel for Arwen. She sails really well under 'experienced hands'.

We sailed for just about three hours - the tide was near a spring and dropping fast and past experience says leave plenty of time to haul her out or else you run out of ramp or hit the slime on the very end of the ramp and its spinning tyres and no grip!  We did try to go up the Plym but all that tide rushing out, well it was 'in hope of' rather than likelihood it could happen. The tide was in full swing outwards and so we abandoned the idea.

QAB allowed us to use the northern ramp on the return because another gent was trying to haul out his Corribee. If I'd known that we could have the north ramp I'd stayed out a little longer but there you go.

After our guest had departed I helped the gent out with his Corribee - a lovely lined twin fin keel boat. The tide was falling fast and he couldn't get it to sit correctly on the trailer so it was straight into thigh deep wading to help him. The water, for November, was actually much warmer than I was expecting! During the retrieval of this boat I learned how to use a rope on the tow hitch to stop your tyres going in the water....hum....wish I'd known this technique much earlier! I also started to appreciate how light and easily moved Arwen and her trailer are!

So what about these lazy jacks then?   My problem is that when I drop the main sail she belly out as she comes down.. The aft part of the top yard drops almost instantly and the forward part of the yard points skywards. A breeze will blow the sail out so that the aft end of the yard goes outside the boat and gets a dunking. I've tried lazy jacks before and they have helped control the sail as she comes down - she falls between them. However, today, the forward end of the top yard somehow went around a lazy jack and so the sail wouldn't drop properly. with two in the boat it was easy to sort out....but it would have been tense and tricky if I'd been single handed.  Which now leads to a question I need to ask John....with the sail I have - would I be able to put a gaff jaw and parrel bead arrangement on the forward end of the top yard?

In the meantime with regard to reefing a standing lug sail...in my last post I wondered how Wayne did it....and bless him he came back pretty quickly.....read his comments in the post below

To our guest for the day, I know he reads the blog...Arwen and I had a great day with  you and please come and join us again any time you are down our way. You are most welcome, thank you for such a great day out.....we really enjoyed your company and expertise.

PS I am sorry there are no photographs in posts at the moment. I have no camera..both have died and I know that photos paint a thousand words but please bear with me until I can save up to get a new camera next year. My phone camera just isn't up to the job.
Posted by steve at 17:59