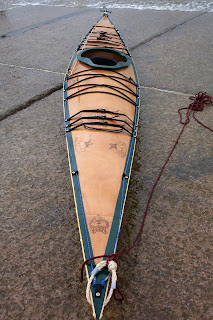 I've been clearing up some of my files on my hard drive and came across this........one of the very first boats I built. I got the plans for a CLC 16 a long time ago.....I tried to find them but I have put them somewhere safe! Anyway, I learned heaps building this one...how to use epoxy; how to draw out plans etc. There were some hiccups....who will forget the moment when I discovered at the point of stitching up all the sides that I had managed to create two left hand sides...long story....not worth sharing but suffice to say on one set of planks I glued a gunnel the wrong side......Haha! 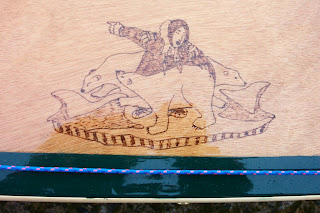 Sorry, I can't remember where I found this image

It has always been a tradition of mine to burn artwork into each boat. These pictures ended up going around the deck sides. I found some art work on the Internet and then sort of amalgamated bits and pieces on the boat. My theme was Inuit for this kayak. I can't find my sketches and so can't at this moment say whose artwork I used but I will dig them out from the basement next time I'm down there - |I'm pretty sure I wrote down the names of the artists and the websites because their work so impressed me...so bear with me for a bit on this one. 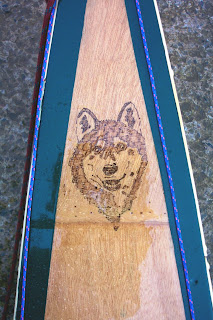 One of my favourites - took me ages to work out

I sketch out the artwork several times before committing it to the deck in pencil; then I play around with it until I'm happy. Then comes the nerve racking bit - burning it in! Calls for nerves of steel - one wrong move and it can be ruined and you can't correct the mistake. It doesn't always go my way - the mermaid below on one of the hatches...looks like she's sat on something very painful! 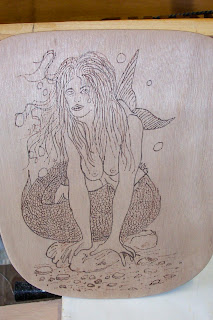 It's so frustrating......everything perfect except the face!

Anyway, there we go a little trip down memory lane. The boat was eventually sold to make way for a new one, to a man who uses it on the canals around Bradford in Northern England.