Its good going through the hard drive and tidying up folders. I found a few more old photographs. Below is my ugly mug on what I think was my second outing on Arwen. I still hadn't tidied up ropes or cut them to size at that point. I hadn't quite worked out where things were going to be stored either! 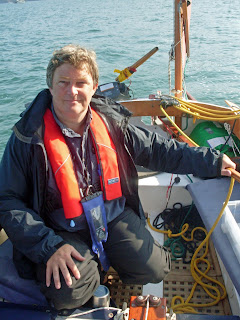 What a rats nest of ropes waiting for cutting to length

The grating is made out of an old bathroom cabinet. hope I haven't shattered any illusions about my joinery skills! It was being thrown out at the local dump and so I asked for it and recycled it. It is teak...so......I've saved part of a tree somewhere!

I also found some old photographs of the construction of Arwen. I know I have a big folder of them somewhere along with movie clips - I kept a detailed record. I remember researching every single navigator built; I downloaded every single photo I could find on the Internet and printed them off. I stuck them in a huge scrapbook and then annotated all over them my ideas; the changes I wanted to make - that scrapbook was my bible. 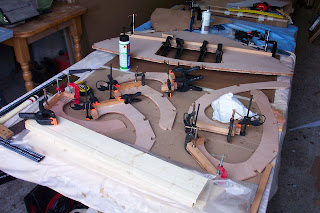 Gluing up all those frames and arms 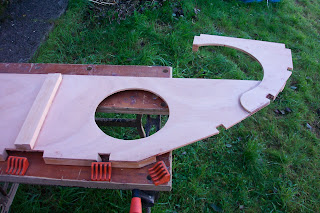 Bulkhead no.2 as I recall! 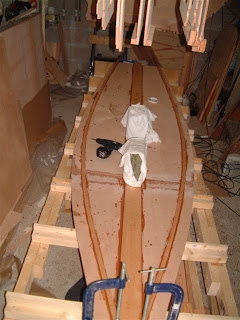 Gluing in the king plank
This was a major step...made more memorable by the fact
that my father-in-law helped me and we both signed  and dated it
He died a few years ago....a fantastic engineer and true gent...he taught me a lot and we all miss him 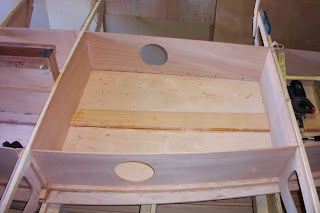 The footwell
Sadly this was the best it looked - afterwards i coated it with epoxy
and something went disastrously wrong. The epoxy didn't set and so it had to be scrapped off with a heat gun.........a horrendous mess and something I never want to go through again 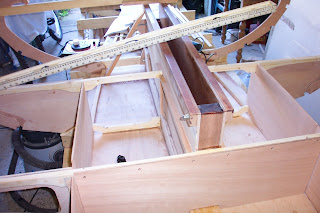 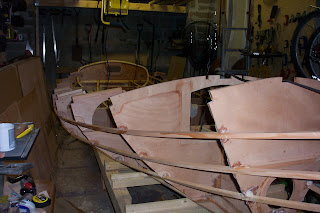 and.....all the frames fitting together
My dad came down to help me plank it all up - another memorable occasion -
we signed the planks as well!

It was great having my dad help me - another meticulous engineer who started on the Great Western Railway in the Swindon works! Whenever I said 'that's good enough', there was a frown followed by 'what do the plans say Steve?' I'd say it was close enough and epoxy would fill the gap; there would be a one way discussion about whether the plans showed a gap...followed by 'My master craftsman always told me 1 thou of an inch gap was 1 thou of an inch too much if it weren't on the plans'. No wonder that the GWR was considered the best railway of the time.....you NEVER heard a GWR engine clanking! That's because all the engineers were precision engineers like dad, proud of the standards they attained. I think being GWR and working at THE Swindon railway works was quite a badge of honour in the railway world! I know dad has taught me a huge amount; he's still my biggest fan (along with my mum) and he never criticises ever......raises his eyebrows yes... ..frequently........but never criticises...........what a cool dad!

l'll be out sailing next week at some stage so will blog my plans later in the week. I suspect I will be aiming to go up the tamar a little way