Someone has just emailed me to ask if I am a Lord of the Rings fan.......well yes......but that isn't where I got the name from.  I'm from Wales.......as a small kid I grew up in sight of the best Castle in Wales - Conwy Castle. My brother and I and friends off the small estate used to sneak in and pretend to be medieval warriors - great times. My dad used to take me to work...in Llanberis in the summer holidays...and you won't get much more welsh than that....in the shadow of the World's most spiritual and glorious mountain - Snowdon. In short, Arwen is a welsh name.....it has two or three meanings....and slight deriviations......Arwen can mean.....'Royal Maiden'.......or Evening Star'.  'Muse' is another meaning and finally 'Pure' and 'Beloved one'.  All appropriate really........so a good name I thought! The little tender being built for Arwen is to be called Angharad.....the name can be traced back to the C9th. In the C12th Mabinogion (a collection of medieval welsh folktales), Angharad was the fair lady who initially rejected Peredur but later fell in love and married him when he returned in a different guise. If I ever build another boat, she'll be named Rhiannon'..........after a welsh horse goddess!  And, for the eagle eyed.......now you know why I fly a welsh flag from Arwen's topyard.  Cymru am byth and Nos Da! 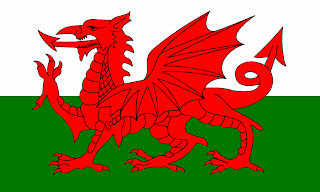