Another trip that I have planned for those summer holidays (seem soooo far away at the moment) is a day trip up the Tamar and then diverting off up the River Lynher. The Lynher is 30km or so long, it's source on Bodmin Moor and flowing into the Tamar Estuary at Plymouth, just above the Devonport Naval Dockyards and just down from the famous Tamar road and Brunel railway bridges at Saltash Passage. 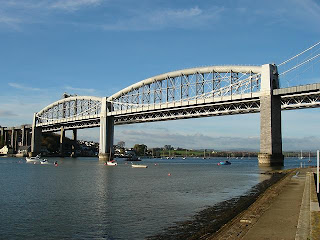 The Brunel railway bridge in foreground (160 yrs old and still going strong)
carries the main London to Penzance railway line. Behind is the Tamar road Bridge..
open the year before I was born ...1961
copyright for picture Johnson Creek

Most of the land drained by the river is agricultural........dairy, beef and sheep farms and some arable production. I think there has also been mining in the past in the upper reaches of the tributaries. The Lynher estuary is a designated Site of Special Scientific Interest (SSSI) and a Special Protection Area (SPA) for species such as Kingfishers, otters, dippers etc. 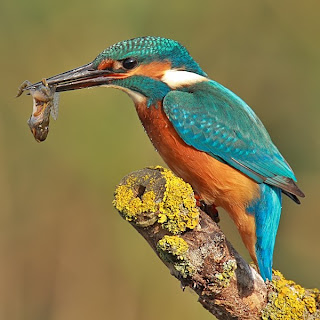 Our native Kingfisher, still quite common along some rivers
copyright for photo Steve Ashton


I’m told that the Lynher supports a population of Atlantic salmon.....I quite like the notion that salmon swim up it. Someone told me it was an EU designated salmonid Fishery (I think I may need to research this further). I know that the BBC published a little article about the development of a new salmon hatchery on the river....which is great news.(http://www.bbc.co.uk/cornwall/content/articles/2008/03/17/nature_lynher_feature.shtml )

The river dries out completely in some places with extensive mudflats and some marshy creeks. The Dandy hole anchorage is a popular deepwater pilgrimage – crowded in summer though. I know that Tom Cunliffe did a small video on yachting TV about pilotage up the Tamar to Dandy hole...for those of you who are interested. (http://www.yachtingtv.co.uk/). There is also a nice little youtube clip of a family sailing up it at http://www.youtube.com/watch?v=AAif54kYN8o 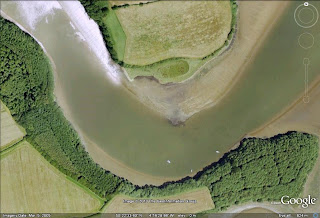 Dandy Hole on the Lynher 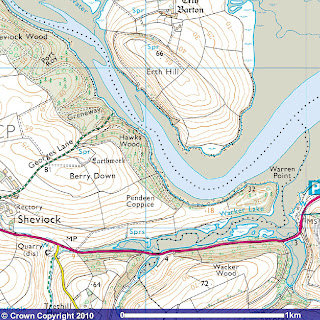 
I’ve sailed out this way before with a school group out near Jupiter Point. The entrance to the estuary is marked by a red buoy. You have to turn to port immediately after that red buoy to avoid mudflats which dry out at low water and the small ‘beggars island’. Looking at the charts – I’ll probably then follow the series of pilotage buoys along the river past sand acre point towards Anthony Passage; passing between the Naval sail training centre at Jupiter Point and the permanently moored HMS Brecon training ship. This area has a strong naval presence with HMS Raleigh close by. 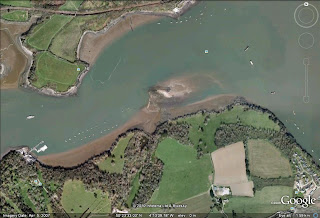 Entrance to the Lynher off the river Tamar
Beggar Island is in midground; HMS Brecon is to west mid channel

I think it would probably be prudent to explore up this river on a rising tide as well, even though Arwen barely draws anything. I’d hate to run out of ‘tacking room’ as I criss-crossed the channel trying to go upwind! Anyway at Black point I suspect the channel would narrow rapidly on a falling tide! I’m sure it dries up completely after Dandy Hole....although I’m told there is sufficient water for a dinghy to do creek crawling up to the village of St German’s....sounds like fun. It is clear from google earth and the charts that this is a beautiful area with rolling hills and potentially a ‘real get-away-from-it-all’ feeling. 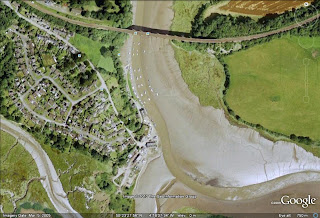 St Germans, at the upper tidal section of the Lynher.......
perfect creek crawling country I suspect!

St Germans seems very pretty and worth a good exploration.....it has a pub......I feel another potential dinghy camp emerging here! There is a Norman church; the estate of the current Earl of St Germans and a little sailing club as well. There are quays which in the late 1800’s were used for fishing, timber, limestone etc. It even has the main Cornwall railway line and if memory serves me right some impressive railway viaducts close by. 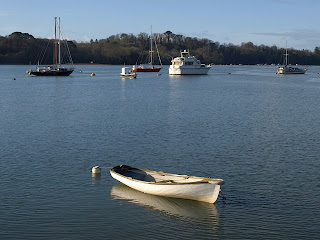 A tranquil river Lynher
Copyright for photo is Derek Harper


Yeap – I definitely think it’s worth doing the research and drawing up a provisional passage plan for this river too....sounds like the kind of trip my Dad would like to join me on as well....now that would be a really special trip!

Steve
just came across your blog this morning, very nice. Great boat and it looks like you have some nice trips on the schedule.
I mentioned it on my blog and did a screen shot of one of your photos, hope that is ok.
I'm enjoying planning a couple of trips myself. Summer can't get here fast enough.
best wishes
steve

Steve, thanks for kind comments - appreciated. Your blog is inspirational and has been a source of great learning for me as a newbie sailor. Your journeys with Bruce and your musings are nightly reading - thankyou! keep in touch

Thank you. We have just moved into Shore Waters and have an amazing view of the estuary. We wondered what the ship was anchored in the Lynher, now we know. We have a view to die for.

congratulations on choosing such a fine location. look out over the next couple of weeks, I hope to be sailing up the Lynher. Small boat, white hull, tan sails - three of them. Erratic course.....being sailed by Welshman!