Previous posts on charging small electronic devices whilst dinghy cruising can be found by accessing the menu on the right - June 2019.

My new iMuto Tarus X4 20,000 mAh power bank and separate Big Blue 28W solar panel charger duly arrived in the post this morning.  I am trying to develop a portable electronics device charging system that can be used across all my outdoor activities including dinghy cruising. Regular readers will know I am also trying to avoid installing a 12v system in Arwen. The issue of charging the VHF from a power bank may have been solved by a company called ‘MyVolts’ and I will share the outcome of the experiment in a future post. 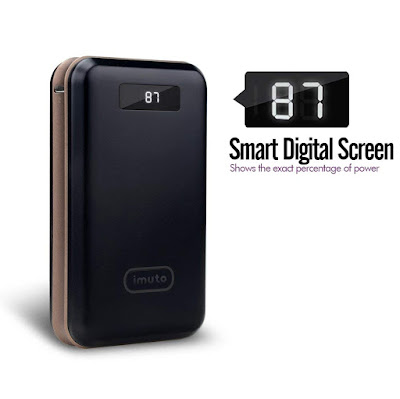 In this blog I briefly summarize first impressions of the iMuto power bank. It is on the table alongside me and over the last forty minutes it has dropped 5% in its power storage but taken my android phone up from 63% charge up to 94% charge. Bottom line it seems fast and powerful!

Other initial impressions – compact and rugged construction. Aesthetically pleasing design with rounded corners, the pack is hand size and about an inch thick. However, I suspect some would say it is form over function and rather dull looking. It came with a bag and USB cable. The digital display showing what % of power is left is so much better that other power banks which indicate power level left through the number of flashing blue lights. You know precisely what power you have left. The accompanying data sheet says the iMuto will charge an iPad mini 2 times, or a galaxy S8 4 times and apparently a MacBook 1 time. My phone charge, if I use Navionics charts on it will last around 7 hrs. It is an old phone! So theoretically I should get several days sailing charges from this power bank. 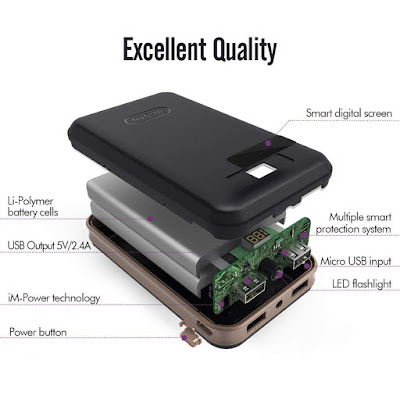 One of the other reasons I bought it was the fact that it has a ‘smart’ protection system that will identify the charging requirements of the device it is plugged into and then intelligently adapt the level of current supplied to a safe and speedy level. So, no over-charging, over voltage or short circuiting! 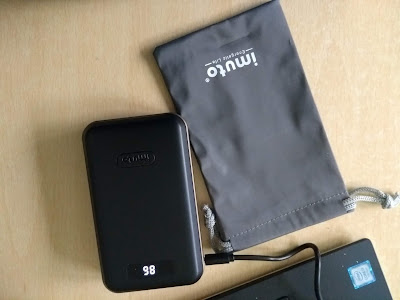 The charging input is 5v/2.1A micro USB connection. It came with 85% charge and the booklet says it will take 10 hrs to charge and you can do it off a laptop or normal compatible wall phone charger.  The two out-ports are rated at 2.1A and 1A.

How durable it is only time will tell. It feels solid and well-constructed.

Negatives as such – well only one I can initially spot and that is it is a slightly heavier beastie that I expected – around 460 gms – so a tad bulky. It is certainly thick – around an inch. However, given I do little trekking nowadays where weight would be an issue – I’m OK with this. But don’t expect this to slip in the back pocket of your jeans. 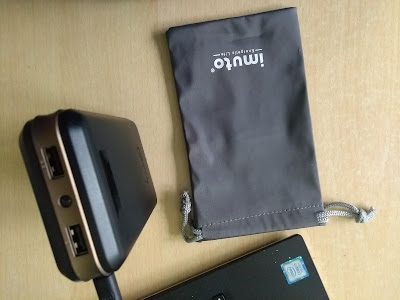 Oh, and one more thing – it comes with a little inbuilt LED torch. Useful in a tent or under the tarp on Arwen.  I will update this post after a few months of testing it.

Steve
Thanks for that. We’ve been looking for another power bank as the one we have ( https://smile.amazon.co.uk/Soluser-10000mAh-Water-Resistant-Flashlight-Carabineer/dp/B07GWDTTB8/ref=sr_1_14?keywords=solar+power+bank&qid=1560844751&s=gateway&sr=8-14) is pretty but won’t even fully charge one of our oldish Nokia 3 mobiles and will only add 30% or so to my ipad. Another with more capacity would be a good idea.
It would be well worth a long check on capacity before relying on it as your 20 Amp hour powerbank (which is what 20000 mAh is - it should supply 2A for 10 hours) should charge one of our Nokia phones (capacity 2.6Ah) nearly 7 times. My 10Ah one should charge one more than 3 times but won’t even charge one once! I’d take stated capacity and what they’ll charge with a pinch of salt!