Setting up my standing lug sail


I don’t understand sails; I should, but I don’t. I can’t keep it all in my head and because I only get out on the water eight or so times a year, I keep forgetting. Sail trimming hasn’t become ‘unconsciously implicit’ in my brain like driving has.


So, this year, we need to start putting this right. Anyway, this train of thought came about because I have been sorting my spars. For years I sailed with square not rounded spars which were too heavy I suspect and that in itself has led to some poor sail setting. 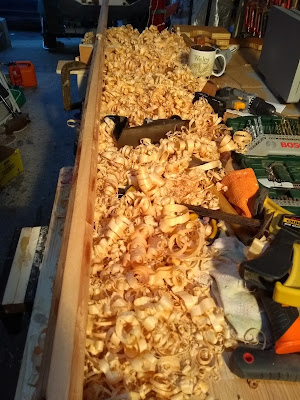 Now they are the correct diameter!!

So as I have been adding layers of varnish in the garage below, I have been musing on a) what hardware needs to go back onto the sprit boom  and b) what I need to adjust or improve to get better sail setting. 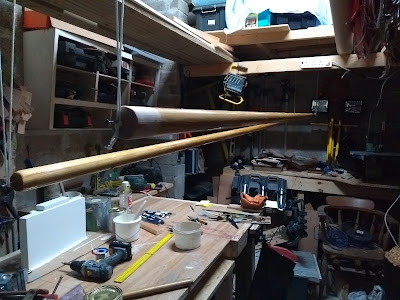 Spar and boom being refurbished and varnished.
On the bench, a new piece for the transom outboard bracket which had seen better days and that had started to rot. Come warmer weather (there is a couple of inches of snow on the ground and it is minus 5C, then it will be epoxied onto the rest of the bracket and reinstalled on Arwen

Towards this end I’ve been reading a few books on small boats and sail trimming and lug sails. I went back and took a relook at the original plans John supplied me and I noted several errors I’ve done over the years, which went unnoticed.  I ask myself how this happened and immediately get the answer, 60 hour working weeks. Nuff said really.
So, the errors? Frequently forgetting to attach parrel bead loops on yard to hold it against mast; ditto down at tack. Discovering I have the shroud and jib tangs set lower than they should be on the mast (imagine an eye rolling emoji at this point). And then, of course, not having tack and part of luff close enough aft of mast.


Anyway, it is time to sort all this out.
So, setting the yard close enough to starboard side of mast so that it doesn’t pull away in the wind or bang into the mast; and so that when halyard is released, the yard slides easily down mast between lazy jacks to fold on to the sprit boom.
Well, in the past anything I have done up there to secure the yard has jammed part way down, necessitating some shoving back and forth of the yard to release it and this means clambering up onto the thwarts to do so. Not good from a safety viewpoint in higher wind or wave situations!
Attaching the tack to the lower mast is easily resolved to a point. A loop of parrel beads through the lower tack eye where the downhaul joins would suffice; or a simple cord with a carabiner clip attached. But here is another problem, which I have yet to resolve. The tack is lower than the coaming when the downhaul is tightened and so the parrel beads get caught on the coaming. I have got around this by inserting the parrel bead loop through one of the sail luff eyes and thus far it seems to be working.
Attaching the yard is another issue I need to resolve. Because I have to untie the halyard at the end of every session to lower the mast ready for the trip home, I always manage to retie it somewhere else! The positioning is critical because it determines how the sail sets. Too far aft and it is difficult to tension the luff and also actually raise the sail, as Arwen’s rig is a standing lugsail, so that yard has to lift up to a near vertical position against the mast! Having shaved the yard from square to diameter has lightened it so that should also help enormously.
Intelligent people would of course, have marked a position where it should always be tied on, based on a really good sail setting experience one trip!!  On Arwen, it’s around 30 – 40% back aft from the front of the yard. The sail is made fast to the yard using marlin hitch lacing with the throat at the very forward end and then stretched taut back aft, being lashed at the peak end. The halyard is attached using a rolling hitch.  However, I might well move away from the marlin hitch method as it strikes me that sometimes the sail area attached to the yard gets over tight and creases. Perhaps, an individual tie at each sail eye - finished as an overhand knot, might be a better method.


Securing the yard against the mast so that it doesn’t bang about, sag leeward, rotate or billow excessively downwind when lowering it, has been hit and miss and so this needs sorting. On the plans it shows a parrel loop tied at exact position where halyard is bent on, this loop running around mast and reattaching to yard. When I have used this method, the yard seems to jam when lowering it. So, either I’m not positioning it correctly or I need an alternative method.
One approach might be to use a tightening noose system. I envisage the halyard descending from mast head where, at a certain point a stop knot is tied in it. The remaining halyard end, which has a carabineer attached, then loops around the yard at the correct position (passing through two eye loops, one each side of yard) before running around mast and back up above yard to be secured to descending halyard with the snap carabiner. Under this arrangement, it should stay loose whilst yard is hauled up only tightening down onto the stop knot as it reaches maximum height against mast top sheave. I would have some parrel beads on the noose so it runs loosely up the mast and stops the halyard from binding.
An alternative method could be a ‘hoop method’, a loose slippery ring being dropped over mast and halyard and not tied onto halyard or yard.  The yard would just be raised as normal. This would be the simplest method. A variation would be hoop with an eye through which the halyard passes before being bent onto the yard.
Another simple method would be to have a line with a loop at one end and a toggle at the other. This is permanently attached to the yard through an eye at the point where the halyard is tied on. Before raising the yard, you simply slip toggle through the eye loop.
Perhaps this method might work. I think I saw it in a book by John Leather. You create a loop of rope which has a thimble in one end and seize this onto the yard at the correct point where halyard should be bent on. The yard halyard passes through this thimble and around the mast and is then made fast at the yards forward end, which I think is called the heel? The halyard acts as the parrel.
A variation on this theme could be using a separate line which is attached with a rolling hitch and then led forward around the mast before being attached further forward on the yard with another rolling hitch.


Whatever method is used, it must allow me to drop the sail instantly without it jamming on the mast; it must allow correct tensioning of luff using downhaul; it must be easy to raise and it must stop the sail billowing or banging against the mast.


Experimentation needed. I’ll let you know in due course which method proves the best!

The follow up article can be found at https://arwensmeanderings.blogspot.co.uk/2018/03/using-sprit-boomed-standing-lug-sail.html
Posted by steve at 16:56

I will follow this thread with interest as I need to build a gaff / lug rig of sorts for my own little dinghy 'Scout'. I have the timber for the mast (Tasmanian Oak) and just need a window of time to get started - I shall watch your progress!

I look forward to following this thread, as I am about to complete a rig for my own little sailing dinghy 'Scout'.

Hi Alden, hope you are well. We are just clearing up the damage caused by storm Emma and the horrendous snowfall and high winds and blizzards. sustained some damage to the house but all can be put right. I'm doing a piece for Duckworks magazine (on-line) so I will add it in here as i do it over the next couple of weeks. I'm going to take a look at how i set up the standing lug rig for Arwen (remember it has a sprit boom with it); what I have learned about sail trimming thus far, how I go about reefing etc. It is really to stimulate some discussion. i sense, but only John could confirm, that most people dont like the standing lug on the navigator and so plum for a sort of gaff rig or Bermudan rig. But i could be wrong, that is just my perception