so much on the work bench

Well there is so much on the work bench at the moment. My friend loaned me an old seagull outboard many, many years ago, which I'd forgotten about but found during the garage clearance. Its clean and the fuel was emptied from the tank a long time ago but my friend is going to give a go at restoring it. The piston seems to be moving so it hasn't seized. He's talented and creative so if anyone can restore it, he most certainly can.

Also on the bench the new sleeping platform with its supports that needs varnishing; also in need of varnish two mast support pieces for the rear transom deck. The front one is in the process of being cut on the band saw and sanded as well. 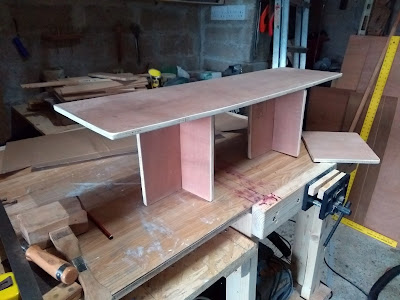 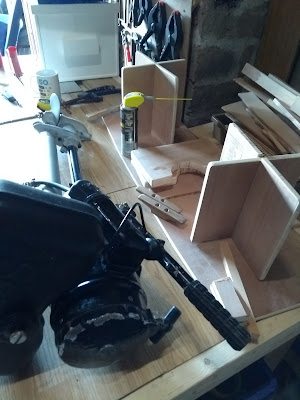 The runners for the two anchor trays have been varnished and need attaching to respective buckets.
All in all that should keep me busy for the next couple of days.
After that, I need to reorganise how I pack things in Arwen - a spring clean and prioritization exercise is due.

In the meantime I have started getting out whenever the weather is amenable to secure some coastal footage which can be incorporated in to this year's video diaries; and then there are a few magazine articles lying on my study desk which need finishing and proof reading before submission. That deadline is looming fast so I need to get a move on!
Posted by steve at 22:08