I'm not that often unwell. I have a teacher inbuilt immunity, developed over countless years of countless classrooms and teenagers. I've had brushes with some serious illnesses but, touch wood, so far have managed to get there early each time and so been able to take preventative as well as reactive treatments.

But I have to say this week I have been struck down by a virus - you know the one - a throat which feels like you swallowed a chainsaw. A cough which makes you feel like a chainsaw is running amok in your chest and lungs and a headache which feels like some one inserted a drill through one ear and out the other.  And no it isn't man flu!

The upshot of this is I havent had more than about 3 hrs sleep each of the last five nights and the only way of getting any sleep is to sit upright on the sofa wedged in by pillows.

Now I share this not to gain sympathy. Her indoors had to look up the meaning of the world when I mentioned it a few days ago; but because, when suffering most, I get the greatest illumination! Like a bolt out of the blue.

I have been fretting for sometime why I cant get Arwen's sails to set properly. It is the design or the cut of them and despite being quite disparaging of myself I do know one or two things about sailing now. So when all of that is eliminated, then what is left?

I must have done something wrong when building her and fitting her out. Nah, can't be. I followed the plans religiously; I triple checked. I then checked another three times after that. I can't be that dim!

And in the middle of a severe hacking coughing fit at 3am it dawned on me - the top yard is 4cm square; not 4cm in diameter! I made it square at the time to save time to get out sailing with the intention of coming back soon after to round the spar off. Only I never did! It should be 4 cm in diameter. Which means there is much to shave off. No wonder it has always been hard to haul it up!!

So, for an hour each day, I have hauled myself down to the garage and through earache, throat ache and cough, I have made the spar gauge, made the securing chocks and shaved the top yard 4cm in diameter.  And when I feel better next week I will make a start on the sprit boom as well.

Illumination strikes at the most unusual times! Sadly, having not improved as I'd hope, sanding will have to wait until next week; as will the sprit boom. 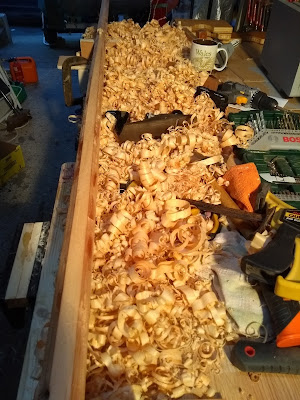 Illumination. Good word to describe those sudden bits of insight. Thanks

Thanks Bob. I've had several illuminations since retiring 😃