motoring up the Tamar. With winds coming directly down the channel; and having played around in the sound for a little longer than I intended.....it was clear that I wouldn't get up the Lynher in time to find an appropriate mooring or anchoring site.

Dockside tourist viewing boat passes Serco cable laying ship. They have just been laying new internet cables to the Scilly Isles in the last few weeks....she is probably back from that work

Anyway, I've sailed that stretch so many times before. I confess I hate motoring. Things rush by; the noise intrudes; it feels like 'cheating'. On the other hand, tacking endlessly backwards and forwards without making any upwind progress doesn't sound that appealing either.....so needs must!

(I guess that maybe if I didn't have such a fixed expedition itinerary about being at a certain place for a certain time, this wouldn't be an issue.........but when you are doing only two day trips....that is more difficult). 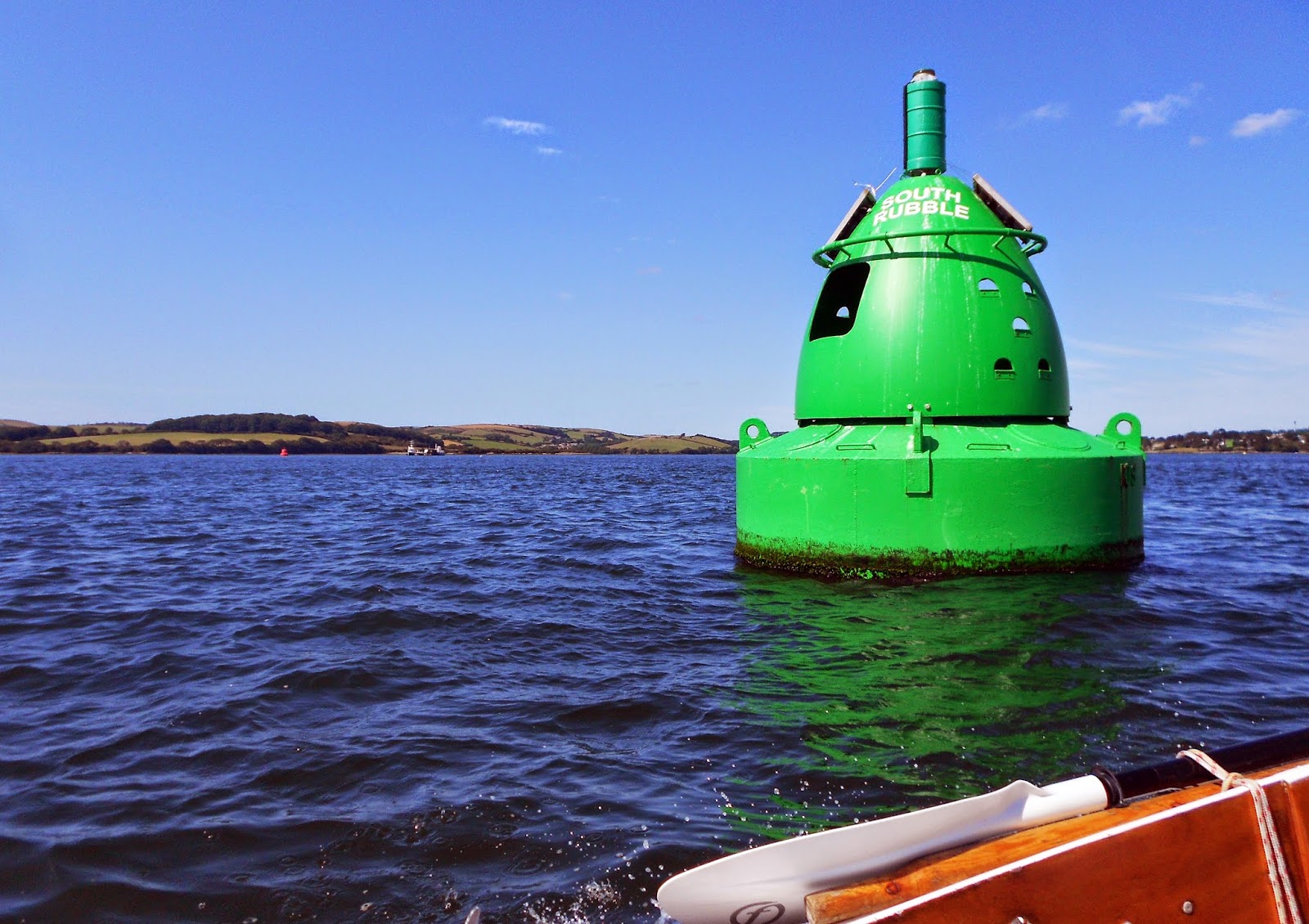 passing the South Rubble buoy in the Hamoaze

On the other hand, it is an interesting stretch of water; there is always plenty to see and lots to think about. It develops your 'all round visibility awareness skills'!  Tugs exiting harbour basins; two police boats on station; one police rib rushing about like a demented wasp. Then there are the Torpoint car ferries to negotiate. (I have a deep seated fear of getting caught out between ferry crossings on account of a slight 'accident' I once had in Fowey, when I managed to foul my anchor just as I was passing between the ferry crossing; thus in one fell swoop I stopped a ferry, caused the harbour pilots to have heart failure; caused the captain of an incoming china clay carrier to almost die on his bridge; and a boat hire man to do a 'Basil Flawty' impression as I explained to him that I had had to cut away the anchor warp and so destine his anchor to the deep bottomless recesses of Fowey ria on account of the fact that in moving to a new fishing location, I had forgotten to pull up the anchor and so it had dragged under the boat........and fouled the prop!. In fairness, it was only my second time in a boat. On the other hand, this is an argument for why people shouldn't hire boats to tourists!)

On this occasion I successfully negotiated the ferry.

My other paranoia about motoring is that I can never quite work out how far I can get on one tank of petrol. It seems to vary every trip! I wonder if it is me or if other outboard users have the same problem?  Consequently, any long motoring stint involves me stopping every thirty minutes to check the fuel level in the integral tank. I am getting very adept at working out where I may find an empty mooring buoy for a temporary stop.  I think the old outboard needs a service as well. on three occasions up the river, it suddenly cut out. I suspect fine flotsam had worked its way in somewhere. By throttling it severely, it would suddenly go back to its normal self. However, it doesn't like going at very low speed! My faith in my outboard has taken a little dent! 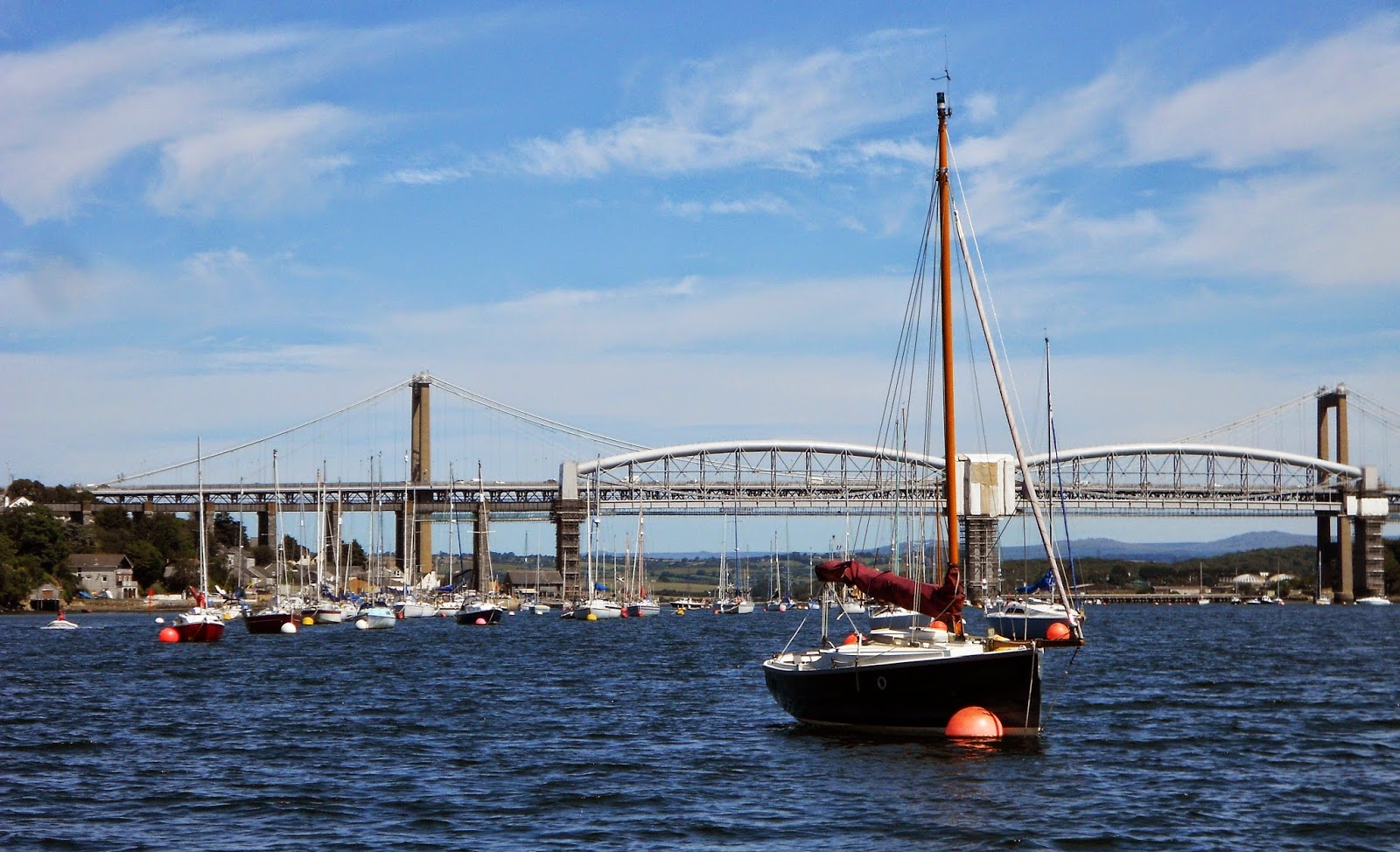 tied up for a re-fueling stop just north of the Lynher entrance and just below the famous Tamar bridges. Up river lies Saltash, Cargreen and Weirs Quay

My outboard arrangement is simple yet effective. When in confines of marinas, my outboard is left unleashed, free to turn and I turn Arwen by moving the outboard tiller.  When in open spaces, I tie off the outboard, lashing it to the bracket; the outboard locking screw just doesn't seem to hold the outboard in place when motoring for extensive periods. It keeps turning itself to port which makes steering somewhat inconsistent and means that I have to constantly sit far aft on the starboard side with my left arm hung out behind me. By lashing the outboard it stops the rotation and I can steer by rudder. I can sit way forward and once I have set the throttle speed, all is well. I have two kill cords clipped together which means that I can still kill the engine immediately from my more forward position. Arwen balances/trims better; and I sit on a slidy cushion so that I can slip easily aft wards if I need to control throttle speed. I can also stand up centrally and with sails stowed inside Arwen, get good all-round visibility.

of course, on entering shallower water, the lashing is removed. I've run aground before! Once was enough, lesson learnt the hard way!
Posted by steve at 09:43