Sailing up Southpool Creek at Salcombe

Southpool Creek is a lovely 2 mile jaunt from the busy Salcombe fairway.
A ria (flooded ancient river valley) of farmed hills and shoreline woods, it starts between Scoble Point and Ditch End beach on the southern shoreline at East Portlemouth, with half a mile or so of small craft mooring trots that lie closer to the southern shoreline as far as Horsepool cove. 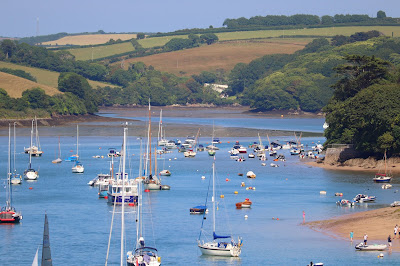 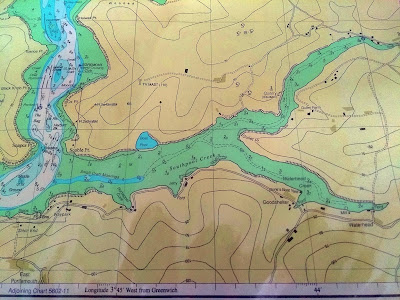 But you soon leave these behind. It is quick to slip away from the hustle, bustle and rampant consumerism of Salcombe in high season up this delightful creek. And it is a great place to escape the occasional dangers of larger craft in the busy fairway and bag area of the lower estuary. there have been many occasions ailing Salcombe when I have been 'chased' down by a much larger craft - both sail and motor. often I have wondered, as I seek refuge out of the path of some thumping diesel engine, whether the boat behind me as actually seen poor Arwen ahead of her.

At low tide the central channel is 0.3 - 0.5m deep where the the small craft moorings are located. Everywhere else will be mud!

Pass the boat pool on the rocky northern shore with its narrow entrance and wooden depth gauge indicator on the wall and the creek-sides become tree-lined with small cove beaches and some stunning shore side residential properties and farms. Here the channel meanders towards this northern shoreline from the end of the small craft mooring trots.

And so in light winds of 8kts, blowing from the NW - NNE, Arwen and I sailed downwind, or on a beam reach, depending on the changing wind directions. Wary of sudden gusts spilling down the northern farmed slopes, we progressed along at a few knots, assisted by the building tide, main-sheet in one hand, tiller in my other.  Winds can be fickle along this creek due to the wooded slopes and low hill slopes that extend down to the water's edge. Contoured slopes around the Boat Pool will often lead to gusts spilling off the northern shoreline, ready to catch the unwary. this is not the place to cleat sheets.
However, today it is clear waters, mirror calm except for the little patches of oncoming wind ripples. The sounds of Salcombe slowly fell astern and for a time we had this tranquil rural creek to ourselves, the only soundscape, one of bleating sheep, occasional screech of a soaring buzzard and the bubbling water running along Arwen's lapstrake hull.

It is good to escape Salcombe. Although I love the place, it is changing - more pontoons, more cafes and restaurants. Upmarket clothes shops and chandlers, coffee shops and galleries. Its tiny population swells to over 25000 in the summer months; and the hillsides show the scars of second home ownership as more Edwardian and Victorian houses are demolished to make way for modern glass fronted apartments and blocks of flats. Rafts of moored yachts line astern in the central fairway between Salcombe and East Portlemouth, buzzing tenders with noisy outboards zipping between moorings and trots.

But, you can still find traditional Salcombe, if you know where to look - Island Street with its boat repair shops and marine chandlers - the smell of fresh paint, wood shavings, linseed oil wafting on the early morning air; the back of the wooden fronted buildings opening onto a tiny side creek, each building with its own private launch ramp down to the muddy waters. And the fish quay on the corner of Batson Creek just down from the public slipway where local inshore boats unload their freshly morning catch into small refrigerated lorries for dispersal across Devon and beyond.

A mile or so from the fairway and the creek splits with a tributary heading east - Waterhead Creek - up to the famous Stone's boatyard and the hamlet of Goodshelter, the tributary ending in a ford at Waterhead - another adventure awaiting around its hidden corners. Another trip later on in July perhaps.

Back on Southpool Creek, we past the big yellow mooring buoy notifying mariners of the 6 kt speed limit and no wake and headed up the north east, port side  fork. The channel started to narrow rapidly and once past the rocky shore of Gullet Point, there is a significant bend in the river and a real narrowing of the channel. Heavily wooded both sides, you enter a world of true South Hams Area of Outstanding Natural Beauty rurality, of fields and bleating sheep, scattered ancient stone barns and the occasional small disused quarry. And it is here, that I lose the wind for a period of time. Oars are shipped outwards, tiller secured with the impeder and main sail dropped neatly and furled. I row for a while. 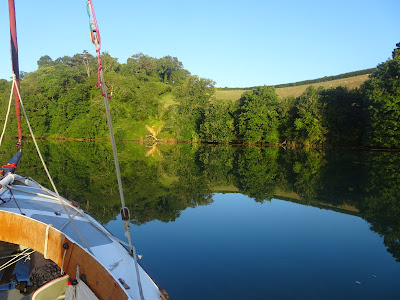 I love creek crawling. I used to fear it - afraid of running aground and being stuck for hours, of embarrassing myself by not being aware of changing depths and flows; scared of being caught by unseen currents and pushed into moorings; of not being able to tack sufficiently quickly to get myself out of trouble; scared of the winds dropping and leaving me adrift to collide with some expensive yacht.

But, over the years, these disasters haven't happened and I have gained in confidence and experience. I am still nervous of the smaller, narrower estuaries with lots of mooring trots. But, those empty creeks with shallow muddy banks - these I love. The pottering along wilderness areas, trying to predict the wind shadow areas, the deflecting wind shifts from woods and barns.

You can sail up this creek between two hours either side of high tide, depending of course, on your draft. The upper creek tidal flow empties quickly and the unwary and unsuspecting can be caught out and stranded, but you will settle in most cases onto soft mud. 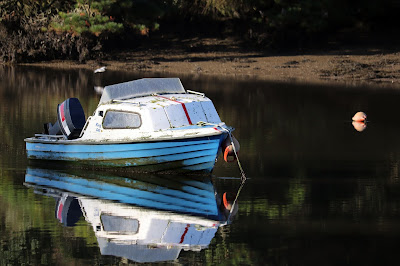 Boats moored in the upper creek channel near Southpool village 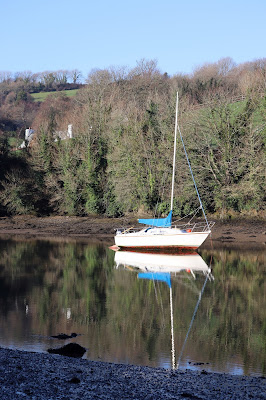 Negotiating a tight bend, the visitors pontoon found towards the head of the creek hoves into view and it is clear it is heaving. Numerous ribs and small rib tenders moored bow on to the pontoon - there isn't any room available. Our objective on this afternoon voyage was to tie up alongside the pontoon for an overnight stop. I rapidly started to come up with a plan B, scanning the shorelines in the immediate vicinity of the pontoon. 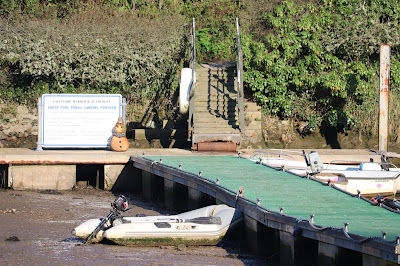 The pontoon during winter months 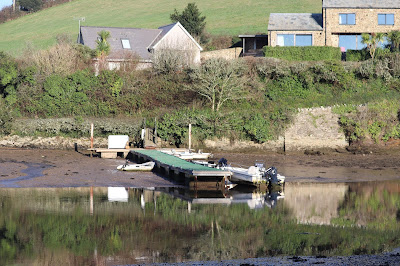 From astern, the sound of outboard motors - a line of four ribs slowly gaining on us, all with one purpose in mind. For just along the lane from the pontoon  is the locally very famous Millbrook Inn, a haven for food lovers and those who enjoy fine craft wines, spirits and beers. And, hot off the press, it has just been awarded the accolade of Devon County Dining Pub 2019. No wonder I was being chased up river by so many ribs. 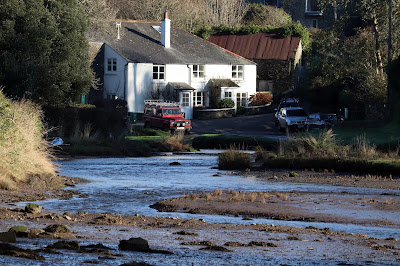 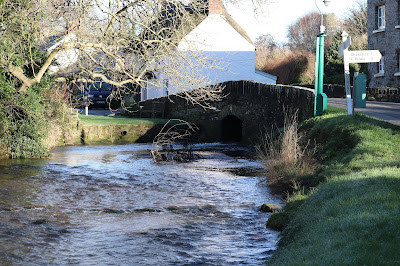 The village of South Pool itself is a stunnling place. It has a resident population of just 143. An area of outstanding natural beauty, visitors can wander down to the creek and walk its shoreline along a number of footpaths, taking a while to sit on the numerous public benches to admire the scenery and listen to the evening birdsong. The local church of St Nicholas and St Cyriacus is built out of local slate and dates from the 15th century although the core of the church may date back as far as 1318. 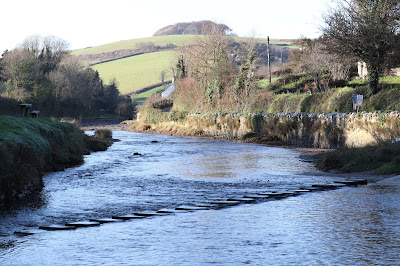 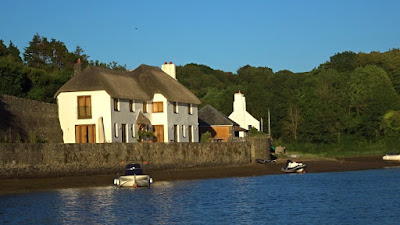 My creek crawling came to an end around 6pm when I arrived at a pontoon heaving with thirty  boats, bow painters tied to pontoon cleats. As the ribs ahead pushed their way between the other ribs tied onto the pontoon head, I took the opportunity to go to the landward end of the pontoon where I spied a small aluminium dory tied beam side along the pontoon.

Securing Arwen bow on is always tricky - she has a bowsprit which can skewer anything frankly, but on this occasion I managed to arrive bow on along the transom of the little dory. Jumping of the foredeck, I loosely secured the painter and pushed Arwen out a little and then jumped into the dory and pulling on Arwen's shroud managed to bring her alongside the dory at an angle. Several fenders prevented the dory transom corner from doing any damage to Arwen's hull. I was anticipating that the dory would soon leave, not because it had a large draft, but because the young children's PFD's left in the dory bilges suggested they would return early from the pub and head back down creek for bedtime. 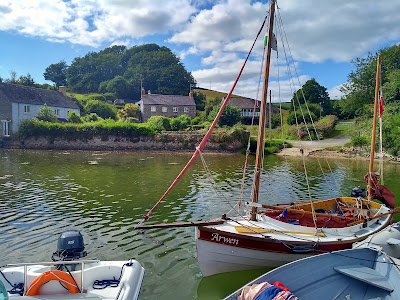 My initial position on arrival at the pontoon. I managed to squeeze between the little white dory and the grey aluminium boat bow on, and then after the grey boat left, fully alongside between dory and rib

The gamble paid off and I secured a prime alongside pontoon berth for the night. Other ribs and even a Cornish Shrimper arrived just as the dory left and despite several dirty looks, everyone knew that they couldn't really take the spot I had for they would dry out before they even managed to get a pint or two down.  And so they were left to try and move around all the bow on ribs and find sufficient space to squeeze their craft in.

It sounds horrendous but wasn't really. I was afforded plenty of people watching opportunities from the sun-drenched cockpit of Arwen. Some returnees from the pub were quite fascinated by Arwen and my on board sleeping arrangements. The galley box stimulated some lively conversation. 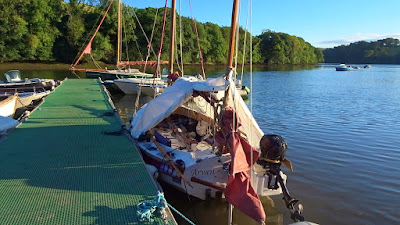 After everyone has departed back downriver on the ebbing tide

Wonderful, but I set the description of this tranquillity aside for a future blog post.

An aside, if you can't moor on the pontoon, there is a little beach to the west of it - a mud/shingle mix with a tiny trickling brook running across it. Stern and bow anchors will secure you for the night.

Thanks for all your stories.

You are most welcome Peter. Hope you enjoy them. Take care now
Steve

hi steve , thanks for this its wonderful :), i am across from Plymouth in millbrook , assuming we get out of the current nightmare safe and sound I want to sail and moore up southpool creek salcome so i'd love a chat sometime , are you on facebook for a text chat ?

hi are you still on facebook ? i could can't find you now