Servicing my outboard and getting very angry

I am angry.....and that is rare. I'm normally a pretty laid back kind of guy but today I'm cross.
The people who serviced my outboard last year cheated me as I have been discovering during my self-servicing of my outboard.
What has made me incensed is that when I came to replace the gear oil I couldn't get any oil to flow out of the top hole. But wait I'm rushing ahead.............. 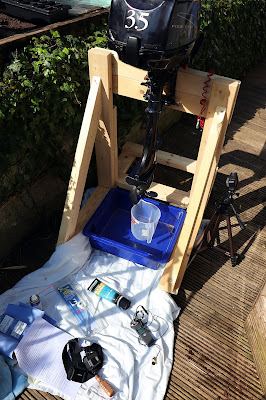 I had everything laid out - gear lube; tube to screw to gear lube bottle; new gaskets for the oil drain screws. Tools were at the ready - big flat tipped screw driver, rags and paper towel, a jug for oil to drain into. 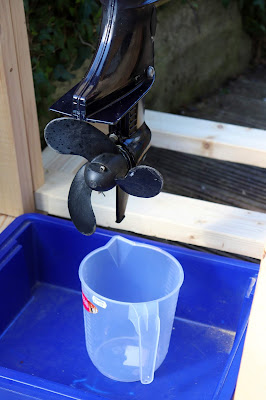 I'd emailed a chandler twice when ordering the engine oil, gear lube, gaskets and the gear lube tube, asking them to make sure that I had ordered the correct stuff for my model outboard. The assured me they had sent everything I needed. 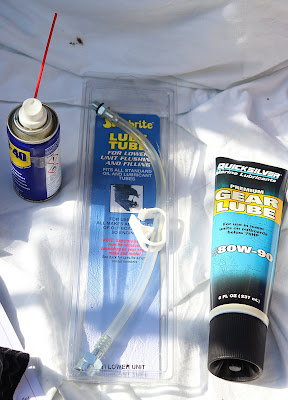 So mistake number one - I assumed that everything sent to me was correct. So I set about draining the gear oil. Imagine my surprise to discover that the tube ordered wouldn't screw into the hole. I discovered this AFTER I'd cut the pointy nozzle off the tube and screwed the tube on. Guess what -  the tube has a 10mm thread at the top. The Tohatsu hole was 8mm. No wonder the tube wouldn't screw in. In the small print on the back of the pack, in font -6.......it said Tohatsu engines would need an additional piece - an 8mm thread screw in piece!

Second surprise - having adapted the tube - I just could not get any oil in that bottom hole. It should have been easy to squeeze it in until it flowed out of the top hole - but nothing. The oil just would not go in. 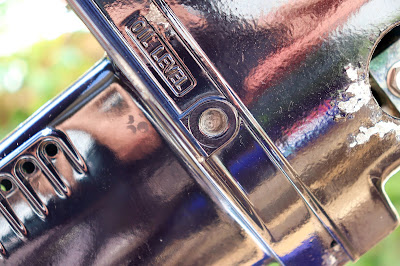 Imagine my surprise when I inspected the top hole. There, about 6mm in - the hole was blocked by the end of a sheared bolt.

I am furious frankly! And sheepish because you would think I'd have noticed that straight away. But as usual, I rushed things. I unscrewed the bottom drain screw, watched the oil trickle out and then set about the top screw. When the dribble didn't speed up - I sensed something was wrong.

Cut a long story short. 5 fluid oz of dark brown oil drained out of the bottom hole. I had to do the unthinkable and practically tip the outboard up on its head (not quite but nearly) to dribble in 5 fluid oz of new oil.  I've worked out it was about 5 oz - there was 8oz in the tube and in the tray underneath was about 2 oz of spillage and I soaked up another oz with a rag.

And yes, I know, putting the outboard in that position should never, never happen.

I refitted bolt screws with new gaskets, although the top screw is pointless because there is a sheared bolt half way down it anyway! Put the engine up the correct way and then left it for an hour. The engine oil in the glass measuring window returned to normal levels. 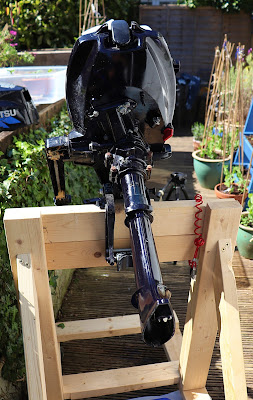 I tried starting the outboard and there was nothing. It refused to start. I removed the spark plug, cleaned it, sprayed the HT lead with WD40. Spark plug put back in and the engine started on the first pull.  The gear lever engaged and the engine ran in gear for about 20 minutes with no problem that I could hear, sense, feel or smell.

I know that not enough oil in the gears could be disastrous but I'm hoping that enough went in.

In the meantime, when the chandler opens after lock down we will be having words although I doubt if I will get anywhere with them. They will say 'prove it was us'. I'll argue that since they have serviced my engine from the start and I have the receipts to prove it - it must be them. I'm not holding my breath on this one - such dishonesty!

I learnt a lot of bitter lessons today - the most important of which are a) don't assume anything  and b) read the instructions before you use anything new ....oh...and don't blindly trust that people have done the job they said they did!
Posted by steve at 23:36

So familiar with all of this kind of thing - my commiserations.
There is some interesting comment about this sort of thing in the book "Zen and the Art of Motor cycle Maintenance" when the author gets his BMW Motorcycle back from the bike shop in a similar state as your outboard with various nuts and bolts burred, paint scrapped and endless bits and pieces loose. He puts it all down to people in jobs they don't love or care about, a lack of pride in the work ethic and a lack of "Mindfulness" - a trendy word that really means having your mind on the job so you can do a good job - in the workplace this means doing the job you are F--k--g well being paid to do. Hope you get it all properly sorted and you don't suffer any long term damage to the outboard.

That bolt will need to come out sooner rather than later. Any decent engineering shop should be able to extract it for you. It would be easier if you remove the leg, but just be prepared to need new gaskets and also for it to be a complete pain lining everything up for re-assembly. Not a particularly difficult job though.

You've discovered the reason I do all of my own mechanicing. Save money and also you know the job has actually been done correctly...

Thanks guys. I'm investigating how to remove that bolt without it or flakes of it dropping into gear mechanism chamber. Thanks for morale boost. It was needed and is much appreciated. Cheers guys

There's trust involved for sure - whether it is outboard, bike, car, whatever.. I like to think the guys I have dealings with are trustworthy, in fact I know they are, doesn't make it any the less irritating for you though... Stu is right though - that bolts going to have to come out and I reckon the only way is to drill and use an extractor?

What worries me.is how deep that bolt is and that nothing drops into the gear housing.....if it does I guess it will have to be taken apart and bits retrieved.......🙄🙄

May be a job for a mechanic.. I know I'd be thinking that way.... wouldn't have to be an outboard mechanic necessarily... any machine shop should be able to do it??? Round here I'd take it to my local bike mechanic as he's had experience of the same on one of my bikes..... :o)

Steve, see if you can find the parts fiche for that engine. From that you should be able to work out the rough dimensions of the bolt.

Personally I'd suggest getting an engineering shop to sort it for you if you're not normally a home mechanic. BUT, if it was me, I'd be soaking it in plusgas, and then I'd drill it, screw in an 'easy out' and then wind the bolt out. With a bit of luck it won't be too bad.

Absolute worst case - an engineering shop would have to drill it out and then fit a helicoil to repair the thread (also something you could do yourself at home).

But you're right about getting swarf in the gears.

Further to my previous comment, this may help http://www.rib-shop.com/parts-for-tohatsu-mfs2-5-3-5b/ (no affiliation, it was simply the first that came up in a search)

Commiserations Steve we’ve all been there one way or another. Good news is you can do it and do it well, as Steve K says you will know it’s done right

I'd plan on disassembling the leg. You don't mention how old the motor is, but odds are it's due or overdue, to have the impeller replaced. Failed impellers destroy a lot of outboards. And before you invert the motor again, I recommend draining the motor oil. If there's no oil, it can't get get into the wrong places.

Small consolation I know - when I came to fit the new fuel pipe to the strimmer last weekend, the part ordered with the specific model number, everything was back in place and I only had to connect the pipe to the carb - only to discover that the tube I/D was the wrong size - too big.

5 minutes of swearing and a cup of tea later I found some shielding from 12v wiring which was the right size to fit the spigot, that plus some self amalgam tape and it was on as a sleeve, perfect seal to the fuel pipe and runs like a dream.

Good luck with getting the bolt remains out, if it means stripping down the gearbox I'd probably do that on the basis that one day bashing around a headland in some bad weather or some other unforeseen nasty condition, it'll be one less thing you need to worry about

Besides in the current situation what else have you got to do :O)

Take it eay and stay safe

Tanzer, Steve, Stu, Max - thanks for all the tips and morale boosting. Much appreciated guys. Draining the engine oil and then upping the engine to fill the gear lube is a cracking idea - wish I'd been bright enough to think of that.

As for drilling into the bolt and using an extractor - read the next post - there have been developments.

Thanks for the support guys - really appreciated - all stay safe and well now. Any other tips most welcome.

Someone will need to drill a hole. Prior to doing that you could see how think that bit blocking the whole is with a punch.but it might be thin and punch out into the shaft, not good. Maybe try drilling small hole in center, gently, to see if its thin. Screw extractor into hold, might be able to pop it loose...still could be hard to get out. Ultiimately, bite the bullet and remove the bottom end, then drill it out.

Yup - that is where we are heading next blog post has further details. A small hole through might allow air to escape and if I put a vacuum hoover on it as I drill - most of the drill swarf might get sucked out