I've been catching up on the Dinghy Cruising Association forum posts and one set on reefing caught my attention. Within a few minutes reading, several longstanding questions I'd had, got finally answered. 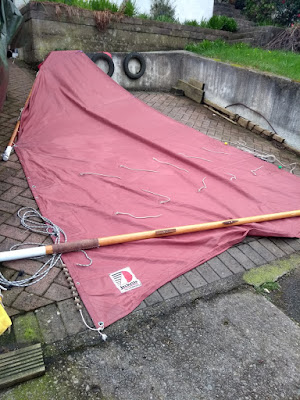 The problem of my combined topping lift/ lazy jacks was easily solved. I run a line from the aft cockpit forward to a block at the foot of the mast, where it then runs up the side of the mast to another block attached up top. From there it runs down the starboard side of the sail, through a loop eye on the base of the boom and back up the other sail side where it is tied off at the top of the mast on the port side. The sail always furls neatly between the two lines, rarely flogging or falling in the water when being raised or dropped.  When I haul the free end of the line back in the cockpit, it also acts as a topping lift, raising the aft end of the boom higher. So far, so good.

However, when putting up the boom tarp tent over the furled sail on the boom, I have to haul lots of spare line through and then grasp the two lazy jacks to move them forward along the boom so they can be tied off against the mast. I can then lay out and unfold the boom tarp tent along the entire length of the boom unhampered. It's a real pain frankly, as during a normal sailing day, I keep falling over all this surplus lazy jack/topping lift line constantly.

However, Chris, a member of the DCA,  had a far simpler idea. He has a hook on the underside of his boom and the line goes under the aft end of the boom and is retained in the aft facing hook. When he needs to set up his boom tent, all he does is furl his sail onto the boom and tie it off, then unclip the lazy jack/topping lift loop from the hook, take it backwards over the aft end of the boom and then gather it up and take it forward to the mast for tying off. No pulling loads of line through. No heaps of 'spare' line tripping him up in the cockpit during sailing. So simple...wish I'd thought of that originally. See, the benefit of joining a great organisation like The Dinghy Cruising Association - lots of really knowledgeable people who love dinghy cruising and who are willing to freely share great ideas via the DCA forum, FaceBook page or Association Journal (which by the way is one of the best small boat sailing journals out there). 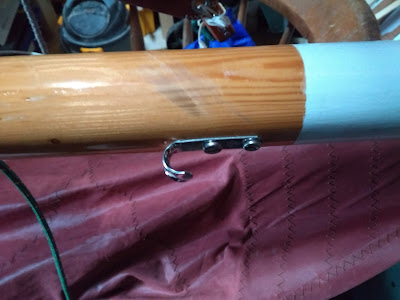 I have reefing pennants that are tied off in a bowline around the boom, that run up to the leech reefing cringles and then back down the other side, around a block on the side of the boom and off to a cleat at the for'ard end of the sprit boom.  I guess it is a sort of slab reefing affair, one that keeps you close to the mast during the reefing process. All well and good except that I always seem to have loops of reefing line hanging below the boom (irrespective of whether the sail is reefed or full) and which seem intent on strangling me or tearing off my hat at the first opportunity.

Chris kept his reefing simple. He runs the pennant up to the cringle, through it and then immediately has a parrel bead tied off on the pennant end on the other side of the cringle. When sail is up, the pennant is just one side of the sail. Come reefing time, he pulls on the parrel bead and down comes the leech to the first reefing point. The surplus pennant line is then ran along the boom to a cleat. Simple!

I wish I could think simple like Chris.
(In hindsight I could have rephrased that last sentence...and wish to point out I am not casting any aspersions on Chris's cognitive mental thought processes - sorry Chris!) 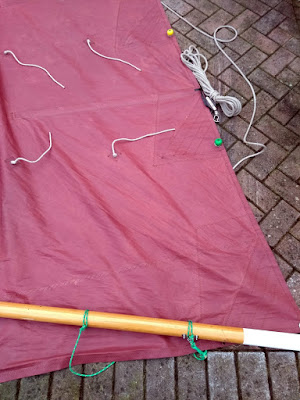 The green and yellow parrel beads at the leech cringles with green reefing lines running down to the boom. The first reefing pennant runs through some eyes on the boom before being tied off. The second pennant is just tied around the boom with a clove hitch and a few securing hitches on that.

Having given this a bit of thought, I decided I would try out Chris's reefing system this season. You can see it in the photographs above and below - sort of!

Dangerously, I have made one alteration to his system. I say dangerously because long time readers of this blog will know about my ability to take the simple and complicate the hell out of it! Anyway, instead of running the surplus line to a cleat, I've dispensed with said cleat and just hitch loop the surplus line around the flapping sail bunch at the end of the boom. The parrel bead toggle is big enough to get tucked under one of the line loops and it seems to hold everything together fine (although this has yet to be tested out on the water during a blow). After freeing the toggle, I can free all the loops with just one tug.

Below shows the old system, so much string, strangling loops and complication! 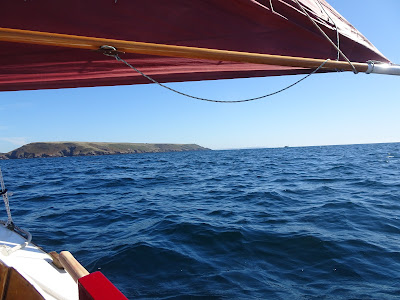 What was wrong before - I couldn't detach the lazy jack/topping lift and was always being strangled by dangling excess reefing pennant. Now hopefully both will be things of the past - thanks Chris

Steve, thanks for pointing me to the DCA Forum (pleased to find out non-members can read the Forum!) and the topping lift/reefing thread. Chris' info is helpful as I will be setting up topping lift/lazy jacks for Gardens this spring. The parrel bead and hook idea is simple and excellent. I'll retrofit Gardens' reefing system in the spring, too.

PS: I should see about joining DCA - to take full advantage.

Steve, Thanks for pointing to the DCA Forum. Nice that non-members are able to read the Forum (I may have to join...). Chris' info re reefing and topping-lifts/lazy-jacks will be helpful when I outfit Gardens this spring.

PS Having trouble commenting on Blogger posts, so my apologies if I've managed to leave this comment more than once!

Actually Bob - I wasn't aware that non-forum members could read it - I thought it was just for paid up members of the DCA. Learn something new every day. I'd encourage you to join - they are an amazing group of small boat sailors with extraordinary knowledge and experience which they readily share. The DCA journal, although British based, is one of the best small boat journals out there. Anyway, Chris's reefing tips were excellent and very thought provoking. Good luck with the outfitting. Look forward to seeing you out on the water.