I've been planning on making a new Gopro camera roll for carrying everything when we go on our long distance travel adventures. I could have bought one for around £26 but I've managed to make one for £14 using off cuts of material I had lying around.

Step 1: cutting the rip-stop orange thin sailcloth to size - 88cm x 56 cm.
Step 2: taking the thin foam stuffing and laying it in the middle of the rip-stop cloth and then stitching it inside to form an oblong 86cm x 26cm. the extra was to allow folds along seams which were then double stitched on a sewing machine. 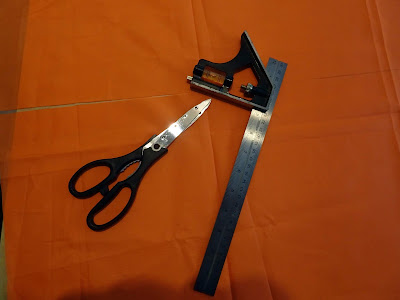 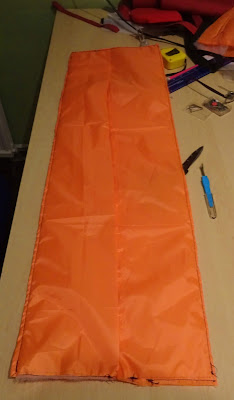 Tip: stitch down the middle as well - I didn't and it proved a right pain later on as the cloth kept moving. Encase all the white thin filler - think sleeping bag with stitched up entrance.

Step 3: turn the padded material over so that the central seam lies flat face down. Now mark out where netting, elastic loops, storage box etc will go. The box should start approximately 20 cm in from one of the ends. Mark out a rectangle 10cm wide across the width of the cloth at that point and stitch onto the padding three strips of velcro - each 24 cm long.

Step 4: make the box out of the foam - I cut it as a fold up template - the end pieces had small flaps each side which could fold in and be stitched to the longer side walls. When the template had been cut out I then covered it with the black cloth and stitched it all around the edges. The rough template is shown on the photo below.  I then cut away excess fabric up to the stitch lines and then folded the box into its final shape - stitching each corner carefully. 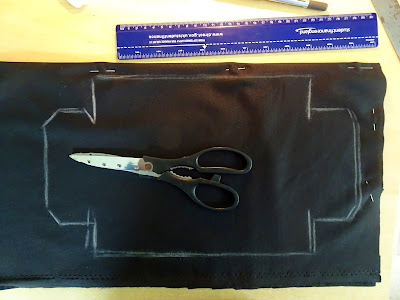 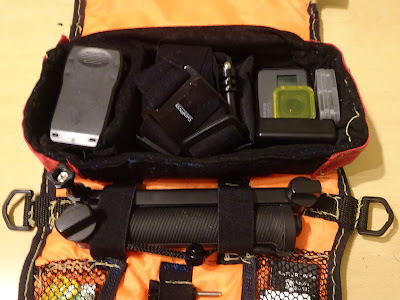 This photo above shows the box.
Note how I also stitched at each end a strip of the outer waterproof material.
The ends of the box are exposed in the roll. I also stitched a strip of velcro on each side end as well to hold the fold over flap in place (see later photographs)

Step 5: I made two small black cloth covered foam dividers for the box - each one having velcro tabs at the end which stick to the cloth material. these dividers can be moved about or taken out allowing you to create different sized spaces in the box.

Step 6: As you can see in the photo above I stitched immediately next to the box two pieces of 25mm wide elastic to hold a GoPo extension selfie pole. Depending on the selfie pole you have - you may want to stitch in a third strip as well. 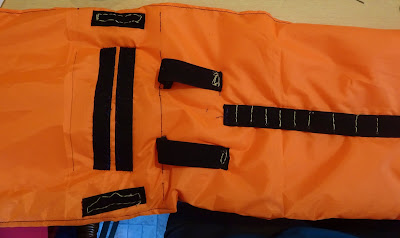 The photo above shows the velcro strips where the box will stick, the elastic strips to hold a selfie pole and then a long central strip which has been stitched into loops. This strip is around  40cm long. As you can see in the photograph below it holds screws, small extension arms, flat bases and clips. 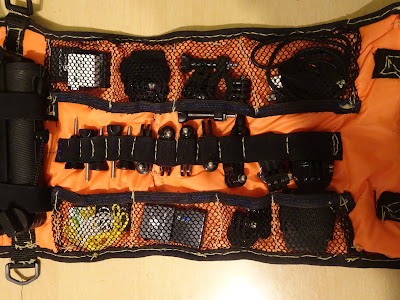 When stitching in this longer middle strip of elastic for loops - I made sure that I put in the thing I wanted stored, stretched the elastic over the top of it and then marked where I would need to stitch to create the other side of the loop.

Step 7: creating the elastic nets. How many pockets you have is up to you  - check the dimensions of the things you want to store in it. I stitched the elastic to the netting first - making sure that at each end there as at least a 1cm folded over strip to act as the pocket end.  I then marked on the position of where I wanted the pocket netting to go and started stitching from the box end.  I stitched one side and then measured out the pocket size before stitching that end of the pocket; I then measured the next pocket size and then stitched its side and so on until all the pockets were done. I kept slight tension on the elastic to make sure the pocket entrances were 'tight'. 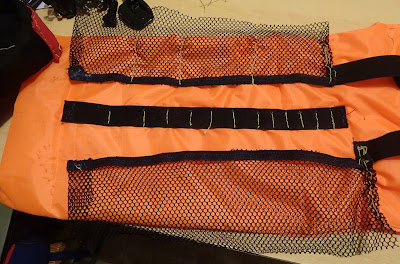 Note: I also made sure that the depth of the pocket mesh material was sufficient that I could fold it over the edge of the foam pad and stitch it on the rear.

Step 8: when I had stitched everything I wanted to the foam base pad, I then stitched the pad to the outer red cordura material. It helped by using dress making pins to position and then hold the material to the foam pad. By now the sewing machine was struggling so i switched to my speedy stitcher and wax thread. Note there should be a 1 cm surplus of red cloth all the way around the orange foam pad - this will be folded over the edge of the orange foam pad in the next step. 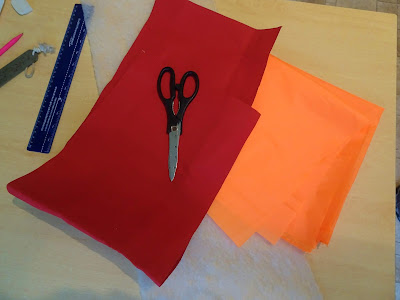 Step 10: I stitched the buckles at the opposite end to the box. the outer clip tapes need to be experimented with and then stitched in the chosen locations.

At the end, here is the finished item - the stitching isn't neat but it is strong and so I'll settle for that.
The contents are protected and secure. It isn't a fully waterproof pack obviously but it has all that I might need for a quick trip. 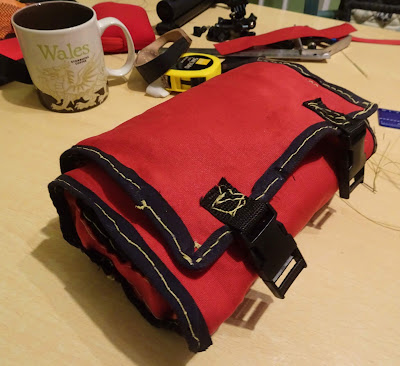 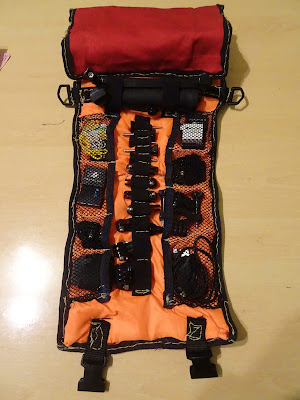 Note the D ring loops at each side. When rolled up - you can attach a webbing shoulder strap
Also note how the far end is left free so that it folds like a flap over the box to act like a lid. The flap has velcro which seals with the velcro strip on the box. 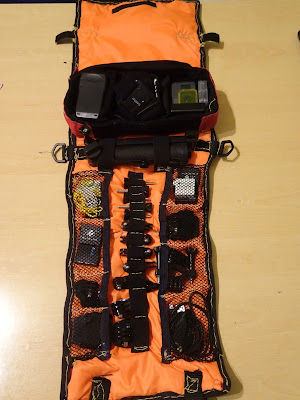 So, what do I carry in this GoPro Roll?
That's enough of most filming situations. No more grappling around in various bags and pouches. It just drops in a dry bag or rucksack. It unrolls and rolls in moments.

Nice work! Your organizational skills put me to shame. steve

thanks Steve - the stitching is somewhat dodgy in neatness but it will hold well. Enjoyed all your blog posts - inspirational stuff.