Below is a photograph of the two ditty bags side by side. The blue was MK 1 and the red MK2. I'm personally favouring MK 2. It is neater all round.  I think my ancestors would approve more of version MK 2. 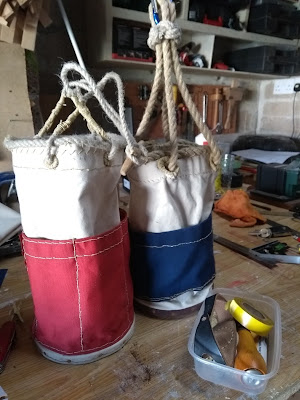 Now neither bag is pristine. I cleaned that work bench several times and despite this, both bags ended up looking slightly grubby.......I prefer 'deliberately aged and distressed' as part of the authentication process!

I have written  in an earlier blog about how I went about making the bag including details of measurements and alterations I would make (have made) if I were to do it again. 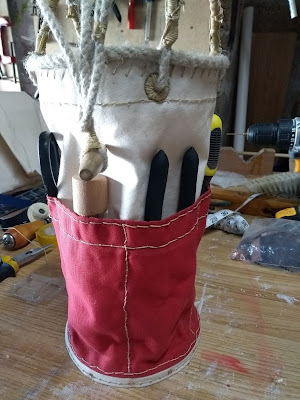 Under the photo below, I have put a little more about the history of ditty bags that I have researched off various internet websites for those of you who are interested in such things. 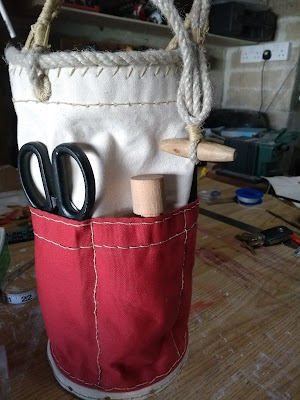 It has been really nice getting feedback from some of you via FaceBook and the blog about your thoughts on the ditty bags. Thanks to those of you who took the trouble to point me in the direction of some YouTube material as well. Most appreciated.

Both bags will be used on-board Arwen, as outlined in my first blog post on ditty bags.  In the meantime, rather enjoying my improving canvas work skills, I might turn my hand to making a one or two other items. Perhaps a canvas wash bag and a sailors canvas bag. of no practical use whatsoever on Arwen, but a new set of skills to learn and something fun to do once the autumn evenings draw in.

On the workbench, waiting patiently, some blocks of Douglas fir, sheaves, brass pins, SS thimbles, hemp rope and waxed seizing twine.......making some stropped wooden blocks for Arwen - seems a worthwhile 'side' project to undertake in he next few weeks.

Some history to Ditty Bags

I briefly outlined some of the history of the ditty bag in my first posts on making my first ditty bag but here are some further details from research gleaned off the web.  A good place to start is 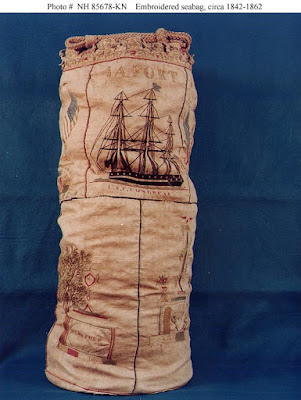 Additional information is as follows:

There is considerable variance over the origins of the term 'ditty bag'. Possibilities include:

From the old English word 'dittis' - a type of canvas material

There is a Scottish word 'dight' meaning 'to clean, repair or make good'

Old American naval sites suggest that the term originates from the word 'ditto bag'  because it contained two of everything e.g. two needles, two spools of thread, two buttons....you get the idea. Anyway, over the years 'ditto' was dropped in favour of 'ditty'.

The existence of the word can certainly be found in records dating back to the 18th century and Admiral Smyth in 1867 referred to the term in his 'Sailor's word book'.

A ditty bag is a small, portable bag that kept tools , equipment and personal items. It went alongside a sailor's sea bag or sea chest and old sailors often referred to a ditty bag as 'me housewife' because it held all the essentials for the repair of clothing, personal belongings and everything on deck! it was kept close to hand, often slung from a hammock ring or a peg/hook next to the sailor's bunk in the forecastle. 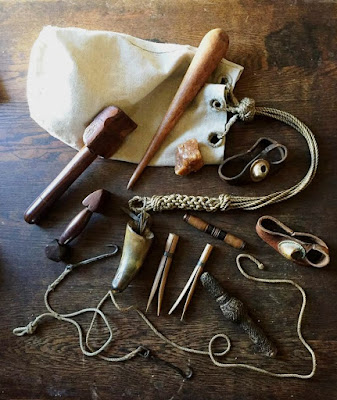 Very often, a ditty bag (and a sea bag) were the first items an apprentice sail-maker made. In making these items he would use the same stitching techniques when making and repairing sails. Seaming, making twine grommets and sewing eyelets were all important skills.  In fact, old timers would often insist that 'a proper sea bag' would have five flat seams with the bottom also being put in with a flat seam too. 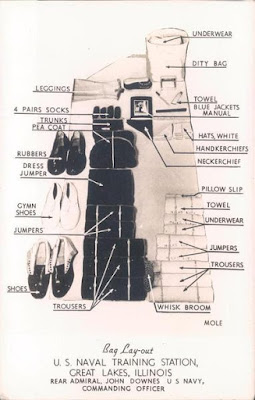 Although referred to as a ditty bag - I'm not sure this example is - I think this is a sailor's sea bag - an entirely different beastie in my opinion - but I am happy to be corrected - after all - what do I know? (Generally very little if truth be told).

Given that sailors of old would often spend any down time sewing new clothes, patching up old ones and making decorative patterns to demonstrate self-expression, sewing was a critical sailor skill.

Most ditty bags would contain the following items: 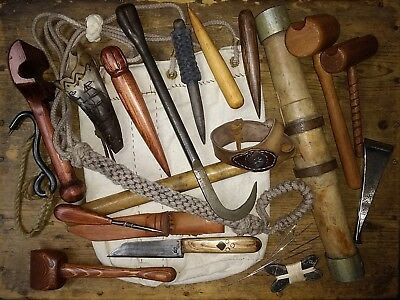 There seems to be some agreement as to the dimensions of a ditty bag and these I shared in the first posts about my first effort.