It seems I have made a bit of a mistake - ignorance is bliss as they say - a mistake that shows my lack of boating and seamanship knowledge.

I made some new shrouds for Arwen out of three strand hemp and apparently that stretches too much and is likely to break under stress. It only has a breaking strain of around 380 lbs and is completely unsuitable for this job. 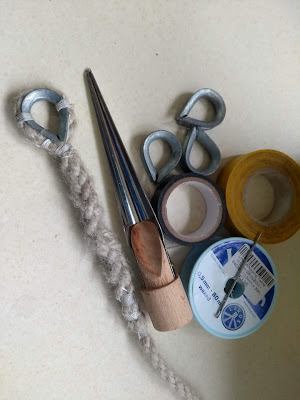 Go figure. I never knew this. I should have.

I wouldn't have made such a mistake as a climber where not knowing your equipment and ropes well enough -  is the difference between life and death.

Truthfully, I'm feeling rather stupid and rightly so. I have no idea what possessed me to make such a stupid, ill-informed decision. Pride in making a reasonably decent first ever eye splice, has for the moment, evaporated. 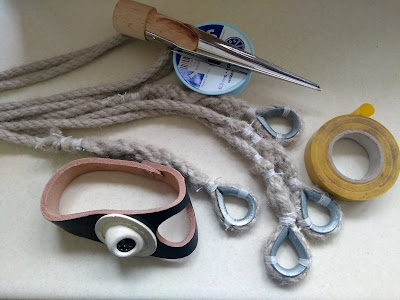 More numtifying, is the fact that I am replacing the old hemp shroud lines - they have been on Arwen for three years with no problems. Yes they occasionally slacken and I used an old system of pulley blocks to tension them up whilst at sea.

This easing of the shrouds goes some way to explaining why Arwen doesn't always point close to the wind - saggy fore-stay apparently - I never realised I suffered from the affliction - go figure again! Steep learning curve.

So, I have been doing some research and in wanting to avoid wire, dyneema seems the way to go. Terribly strong and non stretch.  Massive breaking strain on just 4mm diameter. So, after a little more reading, if nothing untoward turns up, I shall sneak down to the chandler once more and get some more thimbles and this time dyneema.

I want to avoid shroud plates and use lashings if possible to secure the shrouds to chain plates - so that will need further investigation.

If you have experience of using dyneema shrouds and can offer any tips and advice, I would love to hear from you, in the comment box below. Take pity on a poor sailor - drop me a comment - and thanks in advance.

Now what do I do with the shrouds I've just made - answers on a postcard please to........Mr Numpty

Postscript:
I'm also using the hemp as the main halyard for my mizzen sail. I tend to keep it permanently up and rarely lower it. When I don't need it I tend to release the mizzen sheet and then use sail ties to pull in the sail against the mast. I leave the small battens in.  Now I have never had a problem with this but then I have never sailed in anything over a force four - I have experienced gusts of 25kts plus though. The system seemed to work OK in a rather breezy outer Salcombe estuary earlier this year as well. But, I suppose I had better replace this as well - if anyone has a view on this let me know in the comment box below. All advice gratefully received as always.
Posted by steve at 08:54

I'm not a fan of natural fibres for boat ropes. They tend to let you down at the wrong moment.

If you want the traditional hemp look, you can get hemp-look polyester rope.

Although saying that, I'm not sure even polyester should be used for shrouds especially if you need a fair bit of tension. Dyneema should fit the bill.

Once you go all modern with Dyneema shrouds, will laminate sails be on the cards next? :-)

I’m using “spunport” polyester rope rigging Elena. It’s modern rope with lots of strength and low stretch (though not as low as dyneema), but looks and feels like nice cotton rope.

I’m planning on using 6mm and 8mm spunport for most everything, except the shrouds, which I’m looking at dyneema for. I’ve been playing with a bit of 8mm spunport for my bobstay, and I think that’ll do really nicely.

Did you also use the dyneema for your bobstay?

suzy, how are you doing?
Im about to swap bobstay over to dyneema over next few months. The dyneema has been good on the shrouds i must admit. I have blocks on my bobstay which i am also thinking of removing