The horror and Heroism below decks

There was a very interesting piece in the Daily Mail this week. It isn’t a paper I read – too politically biased and Tory for my tastes; but someone drew my attention to a lovely piece by Bernard Cornwell. He is the author of historical novels and the ‘Sharpe’ series. His books are excellent reads and I recommend them to all. Anyway, I share with you the highlights of this article which focused on ‘the horror and heroism below decks at Trafalgar’.


Cornwell starts with a summary about how Victory wreathed in smoke seems doomed to be destroyed by the French ship Redoubtable. Nelson lies dying below deck from a sharp-shooter’s well aimed bullet and the Redoubtable crew are about to throw a bridge across to Victory for a boarding assault. But all is not yet lost, for HMS Temeraire sails across Redoubtable’s stern and delivers a broadside that rips through oak beams and decking and destroys one-third of the best trained crew in the French navy. Cannonballs and 68lb carronades rip into crowded upper decks and when redoubtable finally surrenders, only 156 of her 643 crew have survived the onslaught. 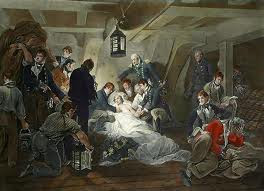 However, a new account, a letter from Robert Hope, a 28 yr old Kentish sailmaker aboard HMS Temeraire, sheds new light on the events of Trafalgar and it has been released by the National Maritime Museum. Robert, writing to his brother John, two weeks after the battle, shows how proud the whole navy are of their victory that day. It also shares some interesting facts about life onboard a Royal navy ship in the early 1800’s.

I was surprised to learn that only about 10% of injuries and deaths on board such ships were blamed on enemy action. Most were due to drowning, sickness and accidents. Sickness? Well, whilst high ranking officers had space and luxury, with expensive furnishings, the majority of crew were crammed into damp, dark and stale air decks below. Midshipmen had quarters not much bigger than dog kennels; ordinary crew had a hammock space 18” wide. Here, these crew worked 4 hr watches – 4 hrs on and 4 hrs off. 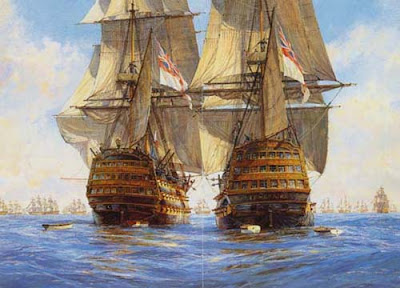 Victory and Temeraire race for the enemy

Food was an issue – diet was poor. With 2lbs of peas each week, each man would also get 4lb of beef; 2lb of pork – both heavily salted, stringy and as tough as leather; 120z of cheese was infested with red worms and the ‘hard tack’ biscuits were infested with weevils. Allocated half a pint of rum diluted with three-parts water to make a grog – it was often replaced with a pint of beer instead. Lemon juice stopped scurvy but other diseases such as dysentery were common. The stinking smell of hundreds of unwashed men, combined with smells of tobacco, tar, sewage and rot must have been overwhelming and unbearable.

The worst off were top-men. Climbing the rigging in near gale force conditions, most were blown to their deaths. On the bowsprit, known as the widow-maker, men who fell were sucked below the hull, never to be seen again.

Robert Hope, a sailmaker, would have seen all of this at first hand. Another sailmakers responsibility was, of course, disposer of the dead. Whilst officers coffins were the wooden cots they slept in, ordinary sailors were simply sewn into their hammocks, with the last stitch being sown through the deceased’s nose....a sort of final check before a burial at sea! 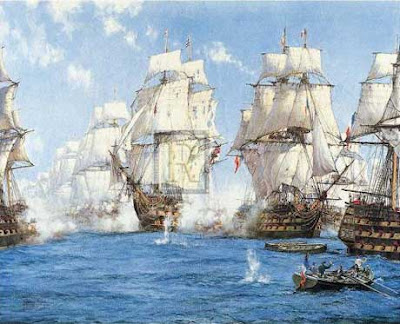 Height of battle at Trafalgar

Sailors spent many months at sea on blockade or picket duties. Prostitutes were smuggled onboard for light relief during the non-stop training drills. This practice was vital and so it was the Royal navy could discharge and reload a gun at one round every two minutes – two or even three times the speed of their French counter-parts. I hadn’t realised, but the British Navy was the only one equipped with the deadly carronades – lightweight guns nicknamed ‘smashers’ because of their close range destructive capabilities.

During engagement, life below decks was horrendous. Temporary operating theatres were set up on orlop decks with coiled ropes acting as mattresses for those waiting the surgeons skills – or lack of them in some cases. On many ships, orlop walls were painted red – it hid blood splatters! Good surgeon’s prided themselves on removing a man’s leg in a minute or less – extraordinary pain when your only relief was a grog of rum. Above, sand on decks helped bare footed gunners get a grip as the blood flowed across decks. Stripped to the waist because of the heat below decks, men wrapped scarves around their heads to reduce the ear damage from pounding guns. Many went prematurely deaf. 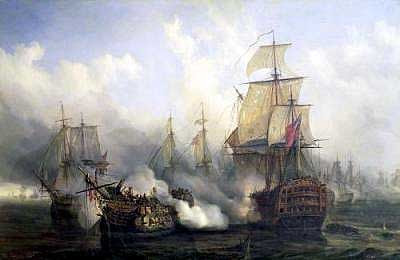 Redoubtable at Trafalgar as Temeraire and Victory carry on the assault
The rest of the article goes on to recount the battle events which I won’t recount here but Cornwell does finish with a lovely point which I quote in full.

'Now, as politicians destroy the Royal navy with economic cuts, it is good to rediscover Robert Hope’s letter, a reminder of the Temeraire’s glory days – and a time when Whitehall understood that Britain is an island, and an island needs a navy’.

Given the debacle over the fact that we are building two new Aircraft carriers which won’t actually have planes to put on them.....I think he makes an excellent point!

On a different note – Angharad is finished and as soon as the inclement weather has passed, I’ll launch her and post some pictures.