A 'sort of' perfect day

Arwen rolled off her trailer this morning. It took two big shoves but she rolled back and then floated off in a controlled manner. Her wheels were submerged fully but I had packed them with grease (using a grease gun) before hand so I am hoping very little salt water got into the hubs. 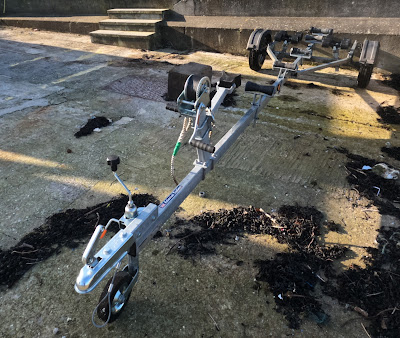 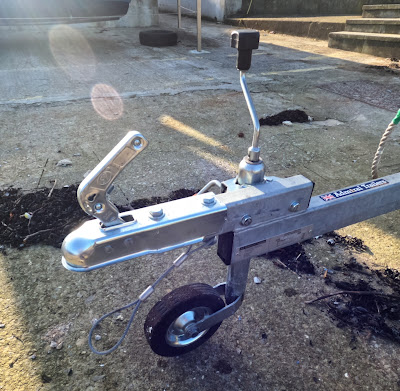 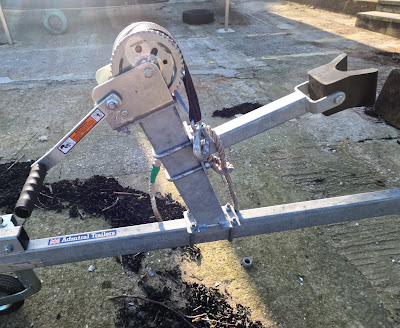 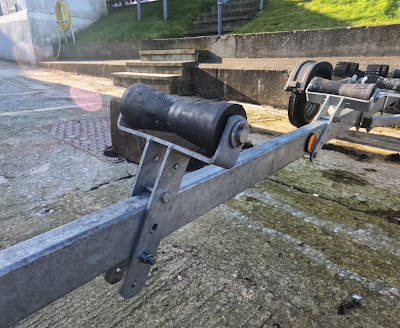 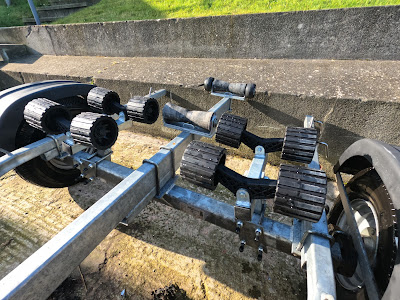 The bunks were replaced with two sets of double wobble rollers and these have made a real difference. They are also not as rigid as the ones on my old trailer and so haven't been chipping the paint on the hull 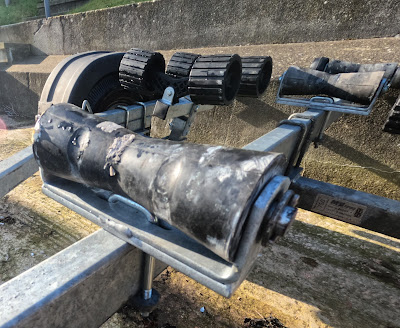 To help the hull clear over the top of the mudguards, the keel rollers had spacers fitted. It also strengthened them at the same time 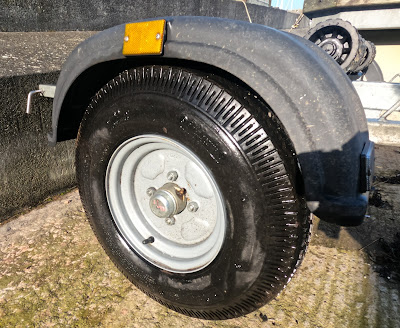 10" wheels with simple to use grease nipples. the hub cap has a tiny hole drilled in it and so when you put new grease in, some of the old grease along with odd water droplets oozes out

The sea on the slipway was clear and clean; little sparkly reflections of sunlight dotting its surface. Arwen waited patiently alongside the pontoon while her trailer was taken up to the top of the slipway and unhitched from Zebedee (our car).

I have discovered something and I cannot explain it in any way, shape or form. A real strange one. I can rig Arwen quicker when she is on the water and tied up at the pontoon, than I can when she is in the marina yard on her trailer!

I know! I can't explain it either but on average I'm 15 - 20 minutes quicker. I literally launch her and then do all the masts stepping and sorting from in the boat alongside the pontoon. Its taken me twelve years to discover this!

I had no particular plans today; what I call a 'potter about' day. High tide was 0948 - a 4.8m one. Winds were from the north east going around to the south - around 6 knots or so.  Plenty of sunshine with a temperature of around 17C. One of those spring blocking high pressure systems for a few days.

We motored out into the sound and off Jennycliffe, I raised sails but not before I had a second epiphany. For some reason, I know not why, I decided to alter the downhaul block and tackle slightly. And it had an immediate effect. I was able to crank on more tension and the sail crease that has plagued me for so long almost disappeared entirely. Go figure!

It didnt last long reappearing around midday, but for a time I actually sailed creaseless. Blissful!

The promised winds did not appear today. The shroud telltales barely flickered. They remained apathetic and on strike all day!  Arwen just drifted listlessly for the first hour or so, carried towards the breakwater on the outgoing tide. the sun shone, the sea was flat calm, pieces of driftwood overtook us. Very galling!

And then another highlight. A radio call from Matt Goss to say that he and his wife Cher were on the water in his newly built navigator 'Cher Maria'. They were just coming around the breakwater.

Being somewhat deaf - I misheard and thought they meant the main breakwater and so I headed across under motor towards some small boats in Cawsand Bay. Poor Matt was talking about the Mountbatten breakwater and must have wondered why I was trying to create a greater distance between him and me! have I said before I'm not the brightest in the pack? 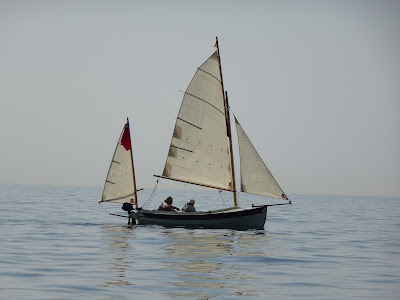 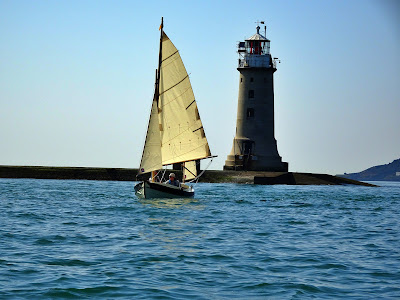 My poor photos do not do justice to Matt's navigator. It is pretty hard trying to helm your own boat and take a photo with only one hand. To make things worse, I was always shooting into the sun as well.

His boat is stunning. it exudes high quality craftsmanship and sensible well thought out adaptations from the plans. An off white hull and whitish sails with blue sheer plank, she looked a sight to behold.

When we managed to head north with the wind from astern, the outgoing tide against us bought us to .....a standstill.

It was quite funny really. we drifted along, had a natter across the expanse between us and then went our separate ways. I had to be back early due to evening commitments. 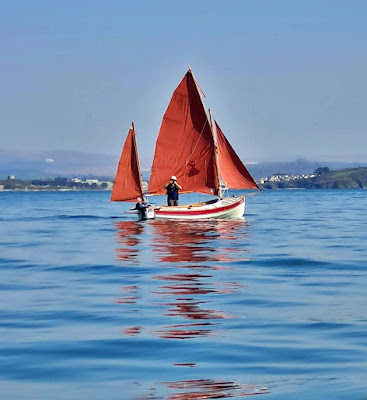 Cher managed to catch me photographing them in one of the lulls when neither of us were going anywhere far!

Back at the slipway, I had a somewhat curt encounter with someone. Not me being curt but someone who has a tenancy at the marina wanted to know if I had paid, if I had asked permission to be on the slip or in the marina and that he had rights as a tenant!  Given I wasn't in his way and that there was room enough to pull out two boats, I just ignored him but it sort of left a slightly sour taste at the end of a lovely day.

Arwen went back onto her trailer far more easily albeit still a little crooked. I have discovered that removing the masts and outboard, I can lift her over the few centimetres to centre her, before putting mast and outboard back in the hull for the journey home. A minor inconvenience and I will do some thinking as to how I can sort this problem.

Matt, it was lovely to finally meet you both and your boat is absolutely stunning. Congratulations.

Hi Steve, it was good to meet up, hopefully a little more wind next time. I have to be honest calling you on the VHF was the first time I have needed to use it. Thanks for the brilliant photos I especially like the one with the breakwater behind. Hopefully catch up soon.

You used the radio fine - I sounded like an idiot - partially deaf I misheard your name; then I tried to change channel and dropped it - causing it to throw a hissy - and then I headed for the wrong breakwater - you know that programme 'An idiot abroad'?
I'm auditioning for the follow up 'An idiot aboard'!

Everything now on a memory stick for you so we just need to arrange a meet up time. Sorry I wasted your day trying to get into Cawsand - hope you managed to make something of the afternoon after the idiot had departed. Cheryl was very patient and tolerant bless her. :)

Do you have a reverse gear on your motor and if so do you find yourself using it much? I'm hoping to do some cruising along what you do and am looking at motor options. Thanks for the content!

Part of the reason you can rig her faster on the water may be access.

A Navigator on a trailer is NOT easy to get in and out of...

hello Landlocked sailor - no it doesn't have a reverse and that is a drawback. You have to put it in neutral and then rotate the whole outboard head 180 degrees and then re-engage the gears. Tis a pain to be honest.

Wayne - how you doin? yep it is a pain getting in and out of her and actually that may well be the reason - especially as I age. The brain is mentally still 30 - the body? Not quite keeping up :)