On my recent trip over to the river Yealm the winds were fickle and so becalmed just off the western end of the breakwater, I had my first opportunity to use Arwen’s new oars. 9’6” in length, built to plans from CLC, my first rowing session didn’t go well. 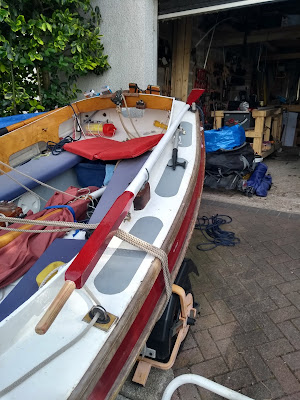 Several issues emerged in rapid succession. The oars are a little heavy and I haven’t quite positioned the oar leathers and collars correctly. My seating position is definitely an issue. I perch on the aft end of the centre case top, on a cushion to soften the pain of sitting over two deck eyes and the cleat for the jib sheets. In this spot my feet touch the aft cockpit sole but the oars are too high up my chest; change position and they are too low. Too close to my chest. Too far away. Hands overlapping, hands too far apart. 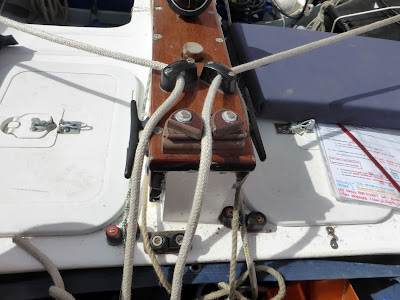 So, some adjustments are needed and I turned to the hive collective on my favourite five Facebook forums – Duckworks, Dinghy Cruising Association, Wooden Boat forum, John Welsford Small Craft and Pocket Yachts and Trailer Sailors.

The first suggestions are obvious and sensible – remove the seat cushion as it could be elevating my position badly; move the deck eyes and jib cleat and sit on the top of the centre case and see if that makes a difference. 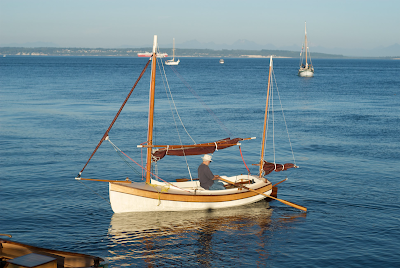 Then we got into some technical stuff to consider.

The measurements of seating position, height of oarlocks above the seat and position of the oarlock blocks are apparently critical. A number of people commented that optimal distance from aft edge of seat to the oarlocks should be 13 or 14”. Height of the oarlocks U bend should be around 6 - 8” above the seat level depending on the angle of the oar. Such positions would allow room for looms to swing and dip. Some people suggested building a removable thwart that could be added at seat top level just aft of centre board case. This option wouldn’t necessitate me having to move the centre case jib sheet fittings. I would, of course, have to think carefully about seat design – storage of it etc. 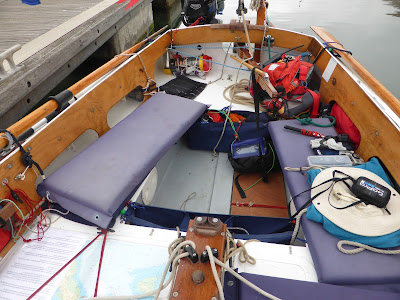 Some people commented that my height might also be an issue and that I should sit upright on the thwart, place the oars on the gunwales and put my hands as far forward as they will go without leaning forward. The rowlocks need to be at the point where the oars are aligned and at right angles to the boat. Then, I’d need to adjust the height of the rowlocks so when the blades are in the water the handles are at a convenient height.  And, most important apparently, I’d need to fit a footrest (or ‘stretcher’) so that I can use my leg and back muscles effectively.  Lack of a footrest loses most of my power. That will take some thinking - a footrest that doesn’t interfere with the sleeping platform boards which get stored on the sole between king plank and thwart side wall. 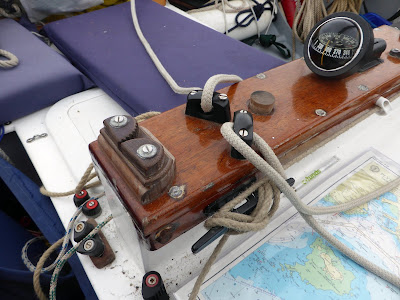 There is another alternative – sculling instead of oars. There was some discussion about the benefits of sculling but my concern is that trying to find a sculling position off the transom might prove difficult. My understanding is a scull would need to be near the centreline of the boat transom. On my transom is a permanently mounted outboard bracket on the port side, then the rudder head with tiller, the offset mizzen mast and finally the boomkin. Its pretty crowded so unless I could design an offset sculling position of some form….. However, one exceptionally experienced dinghy cruiser suggested that perhaps the oar could be kept in place by a rope loop around the oar and the mizzen mast. He felt there would be no need for a sculling notch since that would cause excessive friction with the oar.

And then there is the standing up – rowing forward option.

“Rowing while standing--if pushing on the oars--is quite effective and comfortable, once the hang of it is gotten.  I speak from river raft experience, only” said one forum member.

Another, Rick suggested that extended rowlock crutches were easy to make from bronze pipe and rod. The ID of pipe needs to be same as OD of rowlock, then a rod needs to go in the other end with the OD equal to the ID of the pipe and the ID of the rowlock socket. Depending on the geometry and leverage I make, I might need to extend the rod into some kind of step but for most light boats the socket should be plenty strong enough. Um! 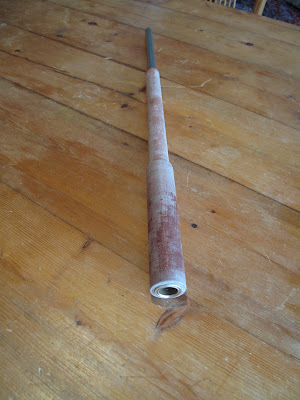 Rick helpfully allowed me to see photographs on his flickr account, some of which are found above and below. Thanks Rick – the images have really helped – much appreciated. 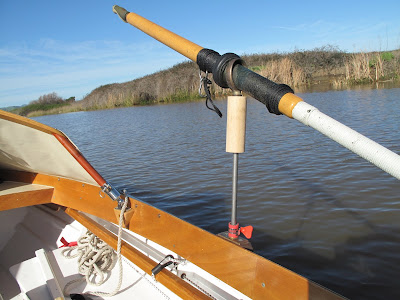 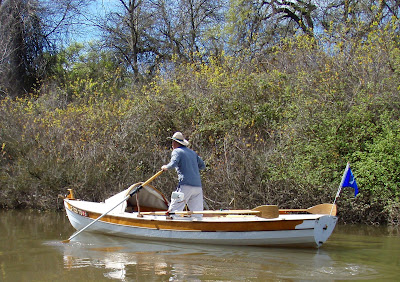 A couple of people pointed out that in going for tall 12” rowlocks, I should make sure I brace and support the base as there will be lots of force generated and through-bolt the oarlock base to the block of wood I’ll use for support. 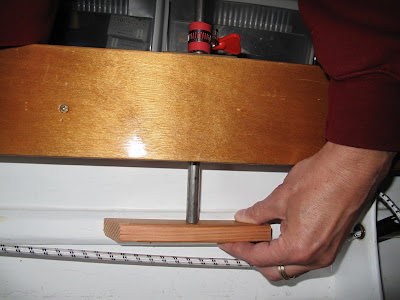 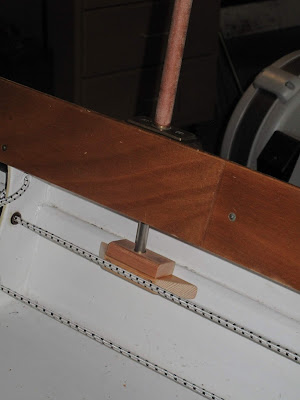 Richard, of ‘Bootstrap’ navigator fame, has his tholes 12” above the gunnel and slightly overboard. He says “Works well but very slow due to wide boat. Biggest issue is - where to store the oars when not in use?”

So, some winter work to do - sorting out the rowing on Arwen.  Last word though goes to Joel of navigator 'Ellie' fame. He carries a 6' paddle and an outboard - no oars - which made me sit up and think....do I really need oars?

Re the scull needing to be near the centreline. Not required. My pivot is a couple of inches inboard of the quarter cleat. If you look at you will see that this boat has the pivot mounted on the side forward of the transom.

A sculling position at the stern doesn't have to be central, but it's desirable to have it as close to central as convenient, an added advantage of a sculling position, it gives you the option to use an oar over the stern for steering in very shallow water, or if you lose your rudder. A stern mounted rowlock rather than a sculling notch is also a preference,

Steve, sounds like you had the same light winds I had on my recent Ashlett Creek trip, when I too did quite a lot of rowing. Tosh although only 12 feet is just under 6 foot wide, which alters the rowing geometry compared to my normal rowing boat. My ideal is to have the crutches (rowlocks) about 12” from the edge of the seat. On tosh the oar height is about level with my shoulders which is a bit high. I also need to lift the boom to clear my head. All of which results in a slow, easy stroke rate, it’s a heavy boat at 350lbs so once it gets going is ok, but is very hard to make progress against a strong tide or big motorboat wash, so rowing is subject to conditions. I also don’t have foot brace but frankly it doesn’t make that much difference unless you’re trying to go fast or make powerful strokes.

For flat water or just moving off a mooring a scull off the stern works week, I don’t have one on tosh but have sculled many boats some much bugger, it’s on my to do list. I’ve also sculled off center, it really doesn’t many any appreciable difference.

For a boat the size of Arwen I like the idea of standing forward, you can get a lot of power that way.

If i were you I might be trying to have both standard rowing and standing positions.

Alastair, Max, Douglas - that is all really helpful - I'm leaning to trying the oar and loop to mizzen mast first but haven't ruled out putting a rowlock on the transom. I'll build a small portable seat as well to go over the centreboard case. Thanks for your help everyone - much appreciated. I agree with you Max, Arwen is a beamy boat. I am always impressed with how Alastair moves his paradox by sculling because his is an extremely heavy boat. However, it is pretty narrow. Arwen is really beamy so sculling would be fine moving on off pontoons, slipways etc but not for longer distances I suspect.