some quick news on lazy jacks and other things

'Stacey' has been given a clean bill of health by Grahame from the Troglodytes! Just in case you think that is a rather harsh thing to call someone from Cornwall, i should point out that they are a scooter club! Grahame very kindly offered to take a look at 'Stacey's' engine as he is only 40 minute run from us. He poked and prodded and twisted things and declared that
a) the wheel would spin freely around the brake shoes....IF  I had it in neutral in the first place!
b) IF it had been put in neutral, then the clutch would work fine!!
c) the gears seemed to be selecting OK when the wheel was spun and the gear selector arm moved.

Boy do I feel stupid! Grahame was a real gent....friendly, good humoured and patient. He calmly explained everything so I better understood in THAT voice. You know the one.....the one teachers use when they are trying to help a very slow student get an understanding of something.......!
Grahame - you were a star man and we are deeply grateful for your time and expertise - thank you. Grahame is about to start a new spare parts Internet business for scooters and when he does - we will make sure we are his first customers

With regard to lazy jacks, well progress is being made here as well. Robin who lives in St Kitt's and Nevis (is that really the paradise I like to think it is? Cos if it is....he's one lucky man because it's barely above freezing here!). Anyway, Robin posted some photos and a sketch of his arrangement on his pathfinder which I show below. Now I just have to get my dim head around them and then apply the same principles to Arwen...one of which is adding another halyard which runs to the lower forward end of the upper yard so that the whole yard can be controlled in a descent using two halyards not one! 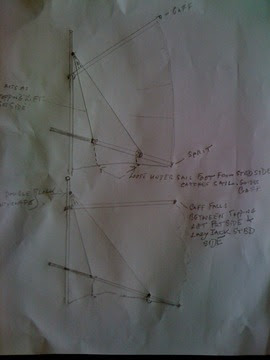 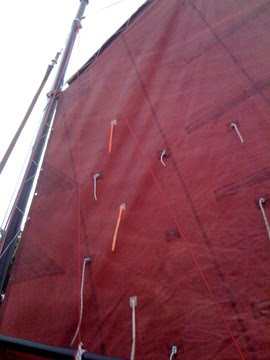 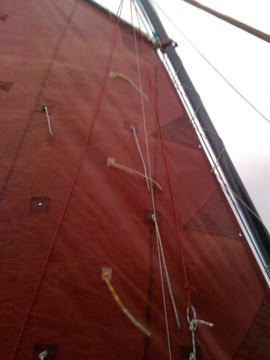 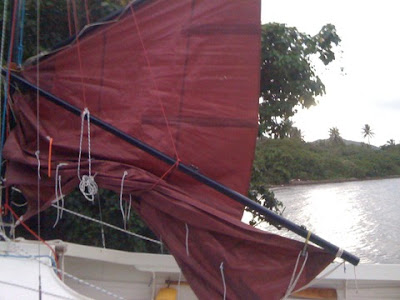 an elegant and orderly drop into the boat - huh! I'm jealous 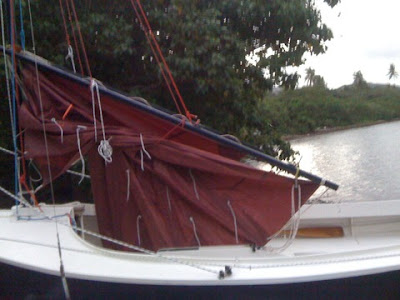 what organisation should look like!
photographs copyright - Robin C

I will post more and comment on them at a later date but thanks Rob for being so generous with time and advice - much appreciated
Posted by steve at 16:50

I very much enjoy your blog. I recently ame across an article by Brian Toss regarding lazy jacks that you might be interested in:

hey Roy - thanks for the website tip - really kind of you to pass it on - very helpful actually. Glad you are enjoying the blog. have a happy christmas and new year too
steve