The John Welsford forum has been discussing anchors and anchor rodes. Someone was wondering how much anchor weight, chain and rode is needed for a navigator.


Everyone has their pet theory/idea. I carry two anchors on Arwen. One is a plough CQR type anchor and weighs in at 15lbs. It has 8m of chain on it and then some 50m of rode. My second anchor is a 10 lb danforth, again with 6m of chain and 40m of rode. I use this one as a stern anchor. Both are moused i.e. the shackles are wired so they don’t come loose. 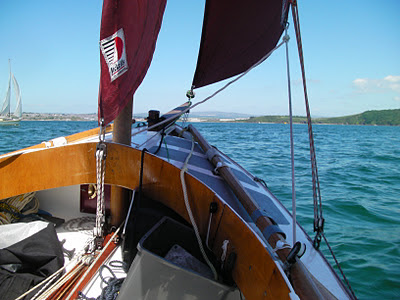 the main anchor is stored in that upright bin on the right hand side of the for'ard cockpit - not the best idea is it!

Storing the anchors is my problem. The main anchor doesn’t fit in the anchor well and so I store it in an old kitchen waste bin which is bungee strapped into the front cockpit well (starboard side). The anchor rode is stored in the anchor well. I am very conscious that this is not a sound arrangement. In the event of a capsize, that anchor is going to fall out with disastrous consequences and so this winter I must find some way of strapping it securely to the deck or the inside of the cockpit so it doesn’t fall out! However, I then need to get a system which avoids the jib sheet getting fouled on the anchor. Ho hum! 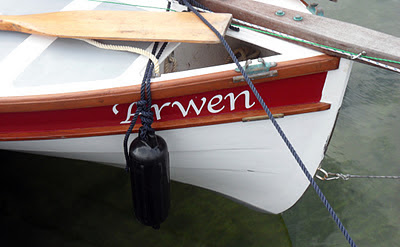 The stern anchor is stored with its rode in a plastic tray on the cockpit floor, port side for’ard cockpit. It is bungee corded securely in place and the whole lot just doesn’t shift at all without release of all the bungee cords. I am far happier about that arrangement!

I also carry the set up for my pulley anchor system using floating rope although Joel has made some good points about the dangers of floating rope. Where I’d use it I want it highly visible and floating so people could see it!

I know I need to get some more anchor rode – I could do with another 50m which I could store in one of the lockers but tie on as and when to the main anchor rode. However, I rarely anchor in anything over 15m....so what I have should be ample even during spring tides.

In the meantime, here is a nice video clip – from 1943 – from little Dunkirk ships to the rescue of an RAF pilot who ditched in the sea. The port where the boats are built looks awfully like Falmouth area to me but I could be wrong! I had problems hearing the sound because my laptop is on the blink. Anyway, enjoy it at http://vimeo.com/21410102

Steve Kind of intrigued why you would want 50m let r 50m alone another 50m in a boat which can float in a couple of feet of water?

I remember Adlard Coles anchoring mid way across Lyme bay in calm, but with Arwen I'd be rowing.

ah! well occasionally I go fishing you see and I know some secret holes in the depths of the tamar where the thornback go and they are DEEP; I also know some nice DEEP ditches outside the breakwater and on a spring tide - you need a lot of scope and some nifty positioning. I also occasionally use anchor in a spot where having an extremely long line to attach to my stern anchor means i can actually anchor in the middle of the bay where it is slightly safer, and then back the boat up to the beach and using the anchor rode at stern - walk along the beach to tie it off by a tree.
a trick I learned from John and the forum guys.....and it works

I don't know how you would store a CQR, but I store a 9 pound Danforth on my foredeck in a set of chocks (http://www.jamestowndistributors.com/userportal/show_product.do?pid=12808&familyName=Whitecap+Anchor+Chock).

I did have a little trouble with the jib sheets fouling on the anchor, so I built a laminated arch that goes over the anchor. I don't have a good picture of it, but you can see it at http://donumvitae.files.wordpress.com/2011/11/balance-beam.jpg.

This setup might not work for you due to the way you store your oars, but I thought the idea might be helpful. Another thought for a Danforth pattern anchor might be to make a well for the chain in the cockpit and install a set of chocks on the forward seat. It would be in the cockpit, but it would be out of the way and secure.

Wayne - good to hear from you. Havent forgotten about emailing you. Your ideas above are really good points. I do need to play about with this and find what works. The jib sheets arch thing is a good idea

Have a really good Christmas Wayne with your lovely family and a happy new year to you as well. stay in touch and thanks for the advice - deeply appreciated