not getting out and about

...in Arwen as much as I would like to be. School work seems to be dominating weekends again and the weather hasn't really been brilliant. I don't want to get the sails wet because at the moment I cannot stretch them out in the garage to dry on account of a half finished motovespa 125 super from 1971! 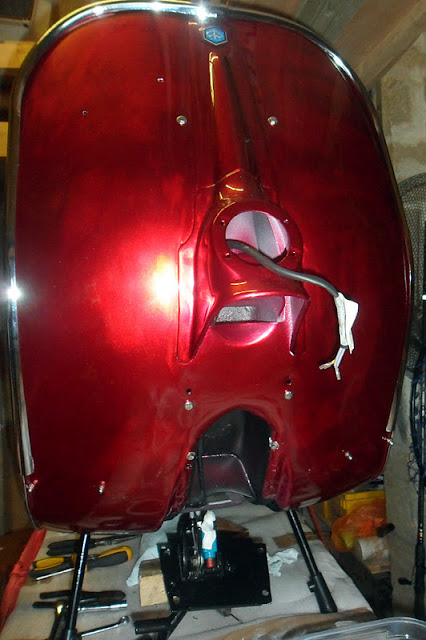 'Stacey' with her new wires hanging out

I haven't even been able to try out my new outboard yet. Reddish marine in Salcombe are doing the brokerage for me on the old one which seemed to be fixed quite quickly. Mike told me that Tohatsu 2 strokes sell quickly because they are lightweight, robust and well regarded. He's had a few people offer him money for it but they have been 'chancers' offering way below what a second hand Tohatsu is worth.  On the other side, at the recent Newton Abbott Boat Jumble (see previous post) there were three 2 stroke 3.5hp Tohatsu's and each one was being sold for £350+ which seems a little excessive. I am not greedy and I will settle for a fair price. I'm not out to rip off anyone or make a profit. I wouldn't want people doing that to me and so wouldn't do it to others. Fair is fair. 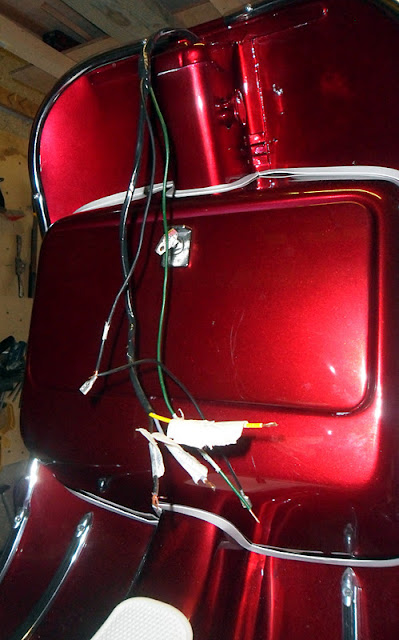 and the other end...wires at the top of the steering column slot

Number 1 son ( I have only one so he's number one by default really as he pointed out to me) came and did some work on 'Stacey' the vespa today. 'About time'.........sort of circulated my brain but I said nothing and played the encouraging father!  He did well and achieved quite a bit in four hours. He cut a bracket which had been holding the rear number plate in the wrong position and then stretched out the plate a little so that the rear tyre rim could fit correctly. 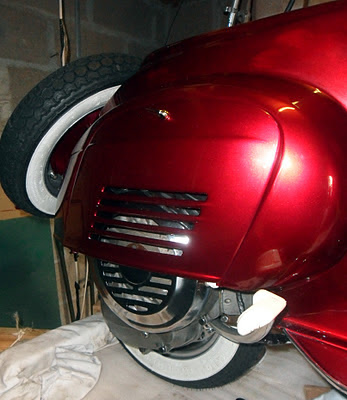 The rear light was wired up (thanks to Al at Beedspeed, who kindly looked at our photographs and then emailed them back telling us exactly what wire went with what other wire and which should be soldered together or not etc). The white rubber seal around it replaces the rubber mat that used to be the backing for the light - apparently getting a white mat is rarer than 'rocking horse sh-t' as one person told me over the phone! Colourful I must say....hadn't heard that expression before! 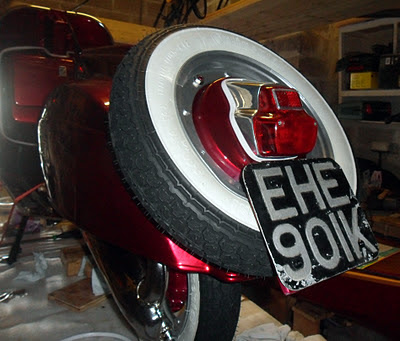 A quick email to the 'smallframes forum' elicited the reply we'd been dreading......

'yes you amateur newbies...the black plastic cylinder cowling does have to go on and yes you will need to drop the rear shock absorber bolt, swing down the engine and slide it over the top.....next time put it on before putting the engine back in its compartment'. 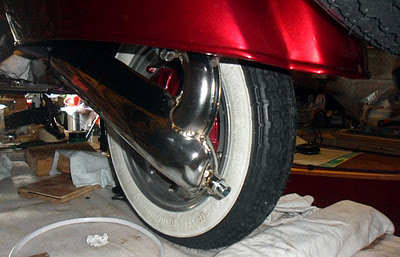 The engine compartment cover took some gently persuasive bending before it would fit...even now it is not quite right but is the best we will get it without fracturing the paint job and that would be a disaster.  We've done some soldering and joining of wires - hoping that we've linked the right ones with each other......otherwise there will be a lot of 'unsoldering' to do! 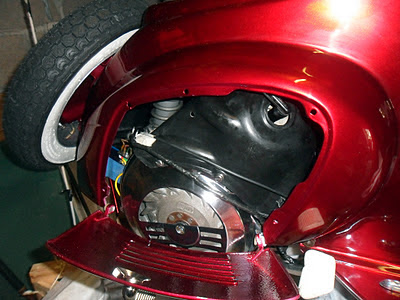 And that is about it.....four hours work. Not bad for amateurs who genuinely have no idea what they are doing. Secretly, I want 'Stacey' done....I want to store my sails, make space for some winter oar making etc etc.  On the other hand I enjoy our father/son time and I wouldn't rush it for all the stars in the universe........so 'Stacey' will take her time, however long that may be..........and winter oar making.........well that may well be a summer project in 2013!

Do you have any pictures of where the recalcitrant spring goes? Would you be able to use a spreader clamp and/or various cordage to stretch it?

hi wayne, thanks for the tips. the situation is that
the spring ataches to the rear base of the foot running boards and stretches forward to a lug hole on the leg stand, which is attached to the front floor section underneath.
the trouble is when you tension the spring to start stretching it - the scooter starts to move backwards; so whilst one of you is holding the scooter secure - the other is pulling as hard as possible to try and hook the spring. in the meantime, you are scrabbling around bent double trying to access the underfloor area because you dont want to lay the scoot on its side.
we think the solution is to pre stretch the spring slightly - stretch one coil out a bit further. it will work because when the legs are up - the spring at this slightly stretched out length will hold the legs up against the base of the floor panel safely. when the legs are pushed down and forwards to their maximum...the spring will stretch considerably but the weight of the scooter holds the legs securely.

A vice (which we need to borrow from school), a large set of piers and a huge amount of pull will stretch it sufficiently

Is there anywhere near either spring anchor point you could brace a clamp? If so, you can hook the other end of the spring, put the base of a spreader clamp against the aforementioned hard point, then use a piece of rope or some zip ties to attach the free end of the spring to the moving jaw of the clamp. While one of you uses the clamp to stretch the spring, the other can hook the now stretched spring into place.

Regarding laying the scooter over: can you lay down some cushions or carpet? This should let you lay it down without damaging the finish.

I just thought of another idea for your spring.

Take a piece of wood a bit longer than the spring. Drill a hole in each end. Use either rope or heavy-duty zip ties to attach one end of the spring to one hole. Then use a clamp or other mechanism to stretch the spring to the length needed and tie or zip tie the other end of the spring to the other hole. You can then remove the clamp and the "stick" will keep your string stretched. This should let you place it quite easily. Once it is in the right place, simply untie the rope or cut the zip ties.

I used a similar technique installing some hose clamps a while back and it worked quite well.

oh my....that is such a simple but deceptively clever idea Wayne...brilliant......thank you for taking the trouble to think it through for us - its definitely worth a go and we will try this week and let you know how we get on. You are a really kind gent, having rescued us before........we deeply appreciate it - thankyou!

Hi not a post about the scooter - just have to tell you I am enjoying your blog - used to liveaboard and cruise a Keelboat , now looking to build a pathfinder (or a navigator, or a pilgrim) still deciding which will be best for Faial Azores sailing. anyhow once again thanks for the blog, just read the cruise from Fowey bit, am going to your first blog post to read from beginning.
keep it up fair winds and may your anchors hold and beers always be cold (or do you prefer warm)
Nath

hi nath - I'm a cold beer man although I rarely partake nowadays. I know ytour dilemma - which boat to build - mine was limited by garage space....it was navigator. If i had more space - I'd take a real close look at pilgrim though I must admit. thanks for word sof praise - most appreciated. I use the blog as a sort of online diary - I'm more likely to keep it updated than an old paper one because I sit at computer daily.....I just wish I could get out more in Arwen atthe moment - hopefully this weekend.......fair winds to you as well and thanks for getting in touch - drop me a comment every so often and stay in touch
steve